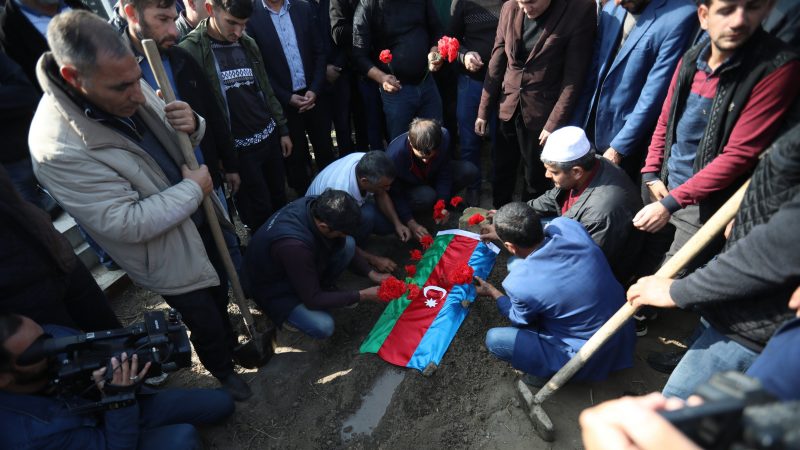 People attend the funeral of seven-year-old Aysu Iskenderova who was killed on 27 October by Armenian shelling, in the village of Garayusifli near Barda, Azerbaijan, 28 October 2020. [Aziz Karimov/EPA/EFE]

The desire of the Armenian side to re-take lost positions and to retaliate for other losses has led Yerevan to disregarding the international calls for ceasefire and attacking Azerbaijan’s civilian settlements with missiles, writes Vasif Huseynov.

Three ceasefire attempts by Russia, France and the United States have failed to end the violence and bloodshed in the “Second Karabakh War” between Armenia and Azerbaijan. Since 27 September, the two conflicting countries of the South Caucasus have been in an extremely violent and intense confrontation followed the failure of peace negotiations of up to 30 years. The negotiations between the two countries were in fact unfruitful all the time, but the provocations by the Armenian government against Azerbaijan reached a record high in the recent months and pushed the two states into war.

The growingly populist and nationalistic policies of the Armenian Prime Minister Nikol Pashinyan who came to power following the Velvet Revolution of Armenia in mid-2018 dramatically radicalized his society and militarized its agenda. Despite the fact that Pashinyan promised to solve the Armenia – Azerbaijan conflict soon after he took the premiership and initiated secret meetings with the Azerbaijani government towards this goal, he has abandoned these initiatives immediately after having consolidated his grip of power in the country.

This was accompanied by the adoption of a military doctrine “new war for new territories” by Armenia’s Defense Minister Davit Tonoyan which implied to occupy more Azerbaijani territories in the case of a new war. This all convinced the Azerbaijani side and other international observers of Armenia’s unwillingness to de-occupy 20% of Azerbaijan’s internationally-recognized territories, an impression reinforced by Pashinyan’s notorious statement that “Karabakh is Armenia, period”.

The tensions between Armenia and Azerbaijan soared in July this year, when Armenia attacked Azerbaijan’s Tovuz district, a region that is of crucial strategic importance as all the transportation and energy routes of Azerbaijan pass through this area. Although the clashes that caused tens of casualties calmed down quickly, Armenia persisted on its militarist agenda and further militarized the society. Less than a week before the Karabakh War II, allegedly in order to supplement the country’s armed forces”, Armenia formed a nationwide voluntary militia which was supposed to gather in total up to 100,000 members.

The inception of a new war was, therefore, commonly expected by local and international observers still in early September. The Azerbaijani government had also intelligence information about the preparation of the armed forces of Armenia for military attacks against Azerbaijan. Armenia is “preparing for a new war. They are concentrating their forces near the line of contact… We follow their actions. Of course, we will defend ourselves”, said Azerbaijan’s President Ilham Aliyev in an interview with local television channels on 19 September.

The over-reliance of the Armenian political and military leadership on the defense system they had built along the line of contact between the occupied Azerbaijani territories and the rest of Azerbaijan, their underestimation of Azerbaijan’s defensive capabilities, and, in particular, the conviction that Russia would militarily intervene in the war if Armenia needed, encouraged them to launch a new military operation to realize Tonoyan’s expansionist doctrine.

The military operations did not, however, take place as Armenians expected. The deployment of modern weapons, especially military drones, by Azerbaijan over the last years, coupled with the determination and solidarity of the general public, helped Azerbaijani army to advance into the occupied region and liberate around 30% of these territories in the first month of the war. The more territories lost by Armenians, the more aggressive they had become. On the one hand, the desire to re-take the lost positions, on the other hand, the goal to retaliate for other losses led Armenians to disregarding the international calls for ceasefire and attacking Azerbaijan’s civilian settlements with missiles.

The aggressiveness caused by this desperation was, however, not limited only to the frontline, but stretched over to the settlements of the Azerbaijani people rather far from the frontline. Firing SCUD-B and TochkaU ballistic missiles and “SMERCH” heavy multiple rockets against civilian settlements, Armenia sought, among others, to cause a humanitarian tragedy in Azerbaijan, create public fear, and thus generate popular discontent with the government. The objective behind these attacks was made clear by Vagharshak Harutyunyan, the chief adviser to Prime Minister Nikol Pashinyan, who, in an interview with TV show “Vesti” aired on the Russian TV channel Russia-1 on 6 October stated that:

“Now we have developed a tactic of striking artillery. And in the future we will strike at peaceful settlements in order to cause panic…”

Following this statement, Harutyunyan’s interview was abruptly interrupted by the program producers, who had likely realized that their guest openly confessed to war crimes.

Unfortunately, not only the officials in the Armenian government, but also representatives of the general public and even journalists advocated this inhuman strategy. For example, Tatul Hakobyan, an Armenian journalist who had also participated in the Western-initiated peacebuilding initiatives between Armenia and Azerbaijan, called his government hours before the deadly missile attack against Barda city of Azerbaijan on 28 October, to cause “a large-scale human tragedy” in Azerbaijan, which he sought as the only way to push Azerbaijan into concessions.

Against the backdrop of this official and popular support to the attacks against civilians, the armed forces of Armenia did not refrain from committing war crimes at large scales.

In the early days of the war, primarily Ganja and Mingachevir cities of Azerbaijan was targeted by missile attacks. Mingachevir was particularly chosen, as the city hosts the largest water reservoir of the South Caucasus, of which destruction would kill hundreds of thousands living in the area causing environmental and humanitarian disaster. The fact that Armenia has listed this as a potential military target had been admitted by Harutyunyan back in July, when he stated that “if Armenian side uses the SCAD-B missiles to target the Mingachevir reservoir, two thirds of Azerbaijan will be under water”.

As a result of these horrendous attacks against Azerbaijani cities far from frontline, more than 80 Azerbaijani civilians were killed and tens of others were wounded. The attacks which are clearly war crimes are sometimes committed at midnights when most people were in sleep. Unfortunately, there are more than ten children among the victims, which has caused nationwide anger and calls for revenge in Azerbaijan. Azerbaijan’s leadership has, however, declared that Azerbaijan would retaliate on the battlefield and legally hold Armenia accountable for its war crimes. Over the last month of Armenian attacks against Azerbaijani civilians, Azerbaijan demonstrated restraint and was able to show its strength only on the battlefield.