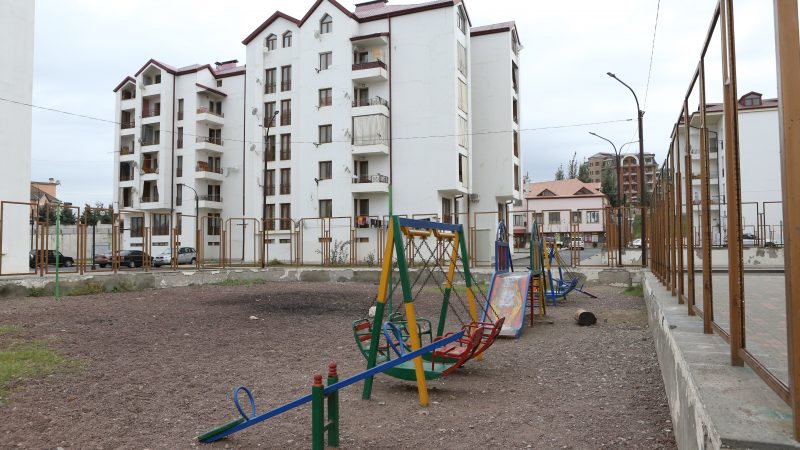 A view of empty playground in Stepanakert in the self-proclaimed Nagorno-Karabakh Republic, 28 September 2020. [Hayk Baghdasaryan/EPA/EFE]

Illegal resettlement is a gross violation of the norms and principles of international humanitarian law and constitutes a war crime, writes Gulshan Pashayeva.

Dr Gulshan Pashayeva is a board member of the Center of Analysis of International Relations of the Republic of Azerbaijan.

Throughout history, illegal resettlement has been used by occupying powers as an important tool for strengthening and consolidating the territories they occupy. It is still happening today in different parts of the modern world.

The occupying powers bring local settlers – usually their own citizens, or representatives of their diasporas from different states – into the occupied territories to impede the return of pre-conflict populations to the places of their origin.

As a whole, such policies aim at changing the demographics of the occupied territory and creating the necessary conditions for achieving favourable results, presumably during referenda to determine the future status of such territories.

It is a well-known fact that illegal resettlement is a gross violation of the norms and principles of international humanitarian law and constitutes a war crime. Both Article 49 of the Fourth Geneva Convention and Article 82 of the Rome Statute of the International Criminal Court deal with this specific issue.

Thus, one would expect that the international system would be taking practical steps to hold accountable the states that are carrying out policies of illegal resettlement. Unfortunately, this is not always the case.

Despite the fact that the territory of the former Nagorno-Karabakh Autonomous Region (NKAO) and seven administrative districts surrounding it (Lachin, Kalbajar, Agdam, Fizuly, Jabrail, Gubadly, and Zangilan) are recognized by the UN as Azerbaijani territory, they have been under Armenian occupation for more than a quarter of a century.

Four UN Security Council resolutions demanding the immediate, unconditional and full withdrawal of Armenian armed forces from these territories have not yet been implemented by Armenia, which exercises effective control over Nagorno-Karabakh and the surrounding territories, as the European Court of Human Rights confirmed in the case of Chiragov and Others v. Armenia.

After the ceasefire, reached in 1994, illegal resettlement became one of the most important subjects for Armenia, for the separatist regime that Armenia created in Nagorno-Karabakh, and for the Armenian diaspora.

Sources, including Armenian ones, report that tens of thousands of settlers have moved into the occupied territories of Azerbaijan, including the districts of Lachin, Kalbajar, Zangilan and Jabrail adjacent to the Nagorno-Karabakh region, in an organized manner with the purpose of annexing these territories.

In fact, two missions to the occupied Azerbaijani territories conducted by the OSCE in 2005 and 2010 found evidence of the presence of Armenian settlers in the occupied territories.

The devastating war in Syria has also significantly contributed to this process. Many of the more than 15,000 Syrian Armenians who could not find a home in the largest Armenian cities have settled in neighbouring Nagorno-Karabakh.

The latest wave of the policy of illegal resettlement is directly linked to a shocking explosion occurred in Beirut on August 4, 2020, after which the separatist authorities of Nagorno-Karabakh announced that they were ready to receive about 100 to 150 families of Armenian origin from Lebanon and envisaged providing 25 million drams (about $51,000) to the Armenian community of Lebanon from their reserve funds.

On September 10, videos have been distributed on social media demonstrating the resettlement of the first Armenian family from Lebanon to Shusha, an Azerbaijani town with significant cultural and emotional meaning for Azerbaijanis.

The Foreign Ministry of Azerbaijan expressed its protest to the OSCE Minsk Group over this issue emphasizing that illegal resettlement of ethnic Armenians who have nothing to do with the region to the occupied Azerbaijani territories aims at preventing “the return of the Azerbaijani IDPs forcefully expelled from Nagorno-Karabakh and surrounding areas and whose human rights have been violated, to their homes and properties for nearly 30 years.”

However, it has been no subsequent reaction from the OSCE Minsk Group in this regard yet.

On the other hand, in an interview, Fuad Huseynov, deputy minister for the affairs of refugees and IDPs in Azerbaijan, noted, taking Armenia as a particular example, that some countries abuse the concept of a “welcoming culture” towards refugees and migrants for the sake of their own political interests.

“Armenia which states from international arenas that it receives large numbers of refugees from the Middle East, deploying them, particularly those from Syria and Lebanon, in the occupied Azerbaijani territories – Nagorno Karabakh and seven other adjacent districts – deceives the international community violating international law, international humanitarian law, and Armenia’s legislation.”

At the same time as it is indicated by Avaz Hasanov, Chairman of Humanitarian Research Public Union, Armenian authorities tried to describe the situation in Karabakh as safe in order to encourage Lebanon citizens of Armenian extraction to move there.

At the same time, they hoped that Lebanese Armenian businessmen would invest in Karabakh. However, the arrival of newcomers might also have created a new security environment in the conflict zone.

As James Wilson indicated, “changing the demographics of the occupied territories by bringing in refugees of Armenian origin from Lebanon, Syria and Iraq is one thing, even though unlawful, but populating Nagorno-Karabakh with PKK militants, classified by all Western countries, including the US and the EU, as a terrorist organization, is another.”

He also mentions that Armenia applied the practice of recruiting terrorists and paid mercenaries during the Nagorno-Karabakh war in the 1990s too.

Frankly speaking, the policy of illegal resettlement pursued by the Armenian leadership has had a negative impact on, and is undermining, the Nagorno-Karabakh peace process.

In an interview, Bahar Orucova, IDP woman originally from Khankendi/Stepanakert, said that it is unfair that Azerbaijani IDPs were denied to live where they were born so many years, but people from other countries are currently accommodated there.

In his turn, Tural Ganjaliyev MP, chairman of the Azerbaijani community of the Nagorno-Karabakh region, thinks that, “although Azerbaijan has hoped for a peaceful solution to this conflict for 26 years, military–political provocations committed by Armenia along the Line of Contact have dashed these hopes.

We hope that, in short time, our army will liberate our lands from occupation and the issue of illegal settlement will be left in the past”.