EU lawmakers agree on a backstop for non-performing loans 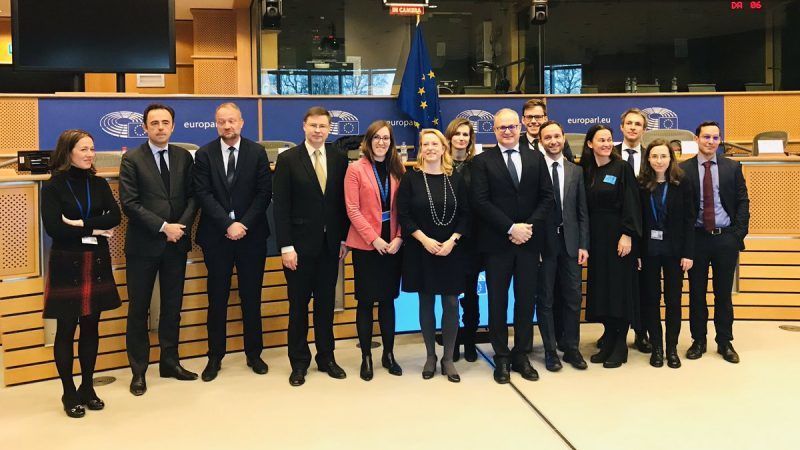 Members of the Economic and Monetary Committee of the European Parliament, the Austrian Presidency of the EU and the European Commission at the conclusion of the negotiations on non-performing loans. [Valdis Dombrovskis/Twitter]

European banks will have to foresee a “prudential backstop” to cover for potential non-performing loans (NPLs), the European Parliament and the Council agreed on Tuesday (18 December).

Based on the European Commission proposal presented in March 2018, the new legislation will require banks to set aside funds to cover for losses on loans that are likely to become non-performing in the future.

“Today’s agreement will ensure that banks will have fewer NPLs on their balance sheets, which should increase their solidity and allow them to finance our businesses,” said in a statement Valdis Dombrovskis, Vice-President for Financial Stability.

Non-performing loans are bank debts that are unlikely to be repaid by the borrower. The new rules aim at avoiding the accumulation of ‘bad loans’ as it happened in the aftermath of the financial crisis.

The deal establishes a three-year period, instead of the originally proposed two, for banks to fully provide funds to cover ‘bad loans’.

After two years since they turned toxic, lenders will have to be ready to procure a minimum loss coverage of 35% to unsecured loans. No provision at all is foreseen for the first year though.

The rise of NPLs rate was particularly serious during the financial crisis and the economic recession.

According to the Commission, ‘bad loans’ in the European banking sector have declined to an EU average of 3.4%, compared to 7% during the pick of the recession.

High rates of NPLs can hider banks’ ability to lend and therefore slow down economic growth.

“The new prudential backstop will ensure more prudent provisioning of non-performing exposures while avoiding negative unintended consequences on the real economy and on consumers,” praised Roberto Gualtieri (Socialist and Democrats), co-rapporteur of the European Parliament.

After a swift negotiation, it is up to the ministers of economy and finance to endorse the deal. The agreement is a step forward into risk reduction in the context of completing the Banking Union.

“This is an important step towards safeguarding financial stability and to reduce risks in the banking sector, but work is not done yet,” said Esther de Lange (European People’s Party), co-rapporteur of the European Parliament for the regulation.

De Langue recalled the need to keep negotiating to address the pending issue of the legacy of non-performing loans in secondary markets, which this legislation does not tackle.

It’s a wrap! In a speedy procedure we found agreement on tackling bad loans in banks. pic.twitter.com/nszx6Pmr4Q

Completing the Banking Union remains one of the most important challenges for the EU.

While the member states have been moving forward in risks reduction in the past few months, some of them are still reluctant on following the same path when it comes to sharing risks.

During the last European Council of the year, the 27 met in a euro summit in inclusive format to discuss how to keep up with the work.

The final agreement, based on the previous understanding at the Eurogroup, endorsed the creation of the European Stability Fund, which aims to support the pot to resolve Europe’s ailing banks with around 60 billion.

However, the leaders left off the table the European Deposit Insurance Scheme (EDIS), the remaining pillar of EU’s banking union, a guarantee for banks’ deposits under €100 billion. Due to well-known German opposition, the conclusions do not even mention the instrument.

Despite the recent signs of progress, the differences among the EU27 on how to deepening the Economic and Monetary Union are more visible by the day. The leaders, however, committed again to “advance work” on the Banking Union by spring 2019.