The London Stock Exchange (LSE) during trading. [Will Oliver/EPA]

The proposal released by European Commission Vice-President Valdis Dombrovskis empowers Europe to decide if post-Brexit London has the right to host financial market “clearing houses” that deal in euros, the EU’s single currency.

Clearing houses are a key part of the financial system’s plumbing, with trillions of euros being handled every year, almost exclusively out of London.

“The purpose of our proposal is to ensure financial stability, and not moving business for the sake of moving business,” Dombrovskis told reporters at the European Parliament in Strasbourg, France.

“We are not putting forward some kind of generalised location requirement, but rather empowering relevant authorities…to put forward this proposal if they deem that enhanced supervision is not sufficient to safeguard financial stability.”

The plan is weaker than a blanket forced-move of euro clearing initially feared by London. That would have been seen as a hostile act against Britain only days after Prime Minister Theresa May embarrassingly lost her majority in British elections. 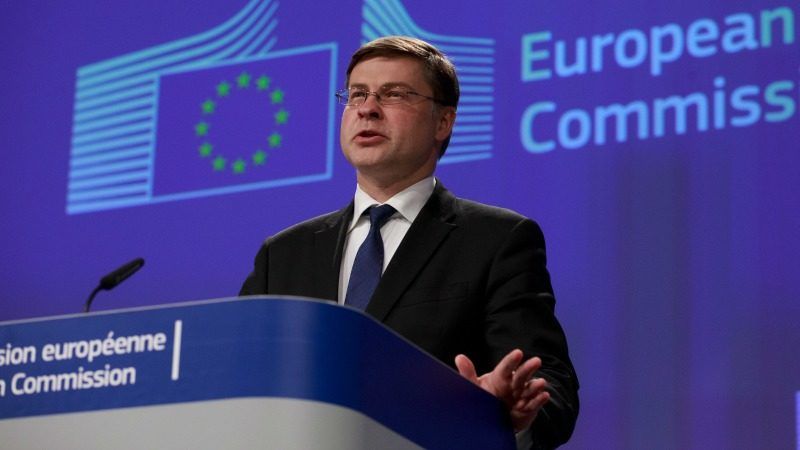 The issue of whether euro clearing houses can remain in the British capital is set to be one of the most contentious issues when Britain negotiates its future trade relationship with the EU after its departure.

Britain has jealously guarded dominance of the clearing house sector in Europe and won an EU court decision in 2015 against the European Central Bank in order to keep hosting the euro deals.

Still, under the draft law, vaunted financial firms such as the London Stock Exchange stand at risk of a forced move of their euro clearing business to a bloc country.

The London Stock Exchange and its massive LCH clearing business is widely seen as being the top target of the new EU policy.

LSE chief executive Xavier Rolet on Sunday warned of “complete chaos” if a relocation was imposed on LCH and urged the EU for caution.

After the announcement, officials in London said the threat to relocate would only cause market disruption and increase costs for investors.

“In taking steps to shift power away from UK clearing houses, the EU could damage itself unnecessarily,” said Catherine McGuinness, Policy Chairman at the City of London Corporation.

“Fragmentation…across Europe and the rest of the world could lead to firms’ costs increase by as much as 20%,” she said.

London lobbyists also insist that only Wall Street or Asia would benefit in the event of an EU ordered exile from Britain.

Last week the Futures Industry Association, a US and UK-linked lobby, warned that forced relocation to the EU would require a near doubling of the $83 billion finance companies set aside in case of contract defaults.

This figure however has been dismissed by Frankfurt-based Eurex Clearing, owned by Deutsche Boerse.

The European Commission’s vice-president Valdis Dombrovskis argued on Thursday (9 February) that a Brexit deal must benefit financial services sectors in both Europe and Britain.

The draft law also proposes to centralise supervision of clearing houses dealing in EU currencies, in addition to the euro.

This would hand significant new powers to ESMA, which would work with the ECB and other EU central banks.

A senior German official said that the clearing sector was already moving out of London, given the hard line taken by London in the run up to Brexit talks.

“There is already movement… The first institutions are turning to…the continent and especially here in Frankfurt,” said Bundesbank board member Joachim Würmeling to Handelsblatt, the German business daily.

“That’s likely to increase massively as the talks go on, if the likelihood of a hard Brexit increases,” he said.

Britain’s vote to leave the EU has sparked questions over its role as Europe’s financial capital, with cities like Frankfurt, home of the European Central Bank, and Dublin also hoping to cash in on any move out of London by financial companies.

Former French President François Hollande warned that Britain’s City of London financial district would have to give up its role in processing euro currency transactions after it leaves the European Union.