File photo. Signage outside the Piraeus Bank branch in Frankfurt am Main, Germany, 2 May 2018. [Mauritz Antin/EP{A/EFE]

This article was updated on 7 December 2018

Greece received three successive bailout packages, totalling €289 billion, but they came with the price of drastic austerity measures. The country took commitments, including the sale of the foreign units of its banks which received state aid by being massively recapitalised.

Consequently, the Greek Piraeus Bank is completing the sale of its foreign units. Unlike its mothership in Greece, Piraeus Bulgaria enjoys a good reputation, also thanks to recapitalisation rules which have been tougher in Bulgaria even before they were strengthened at the EU level.

According to a press release published on Wednesday (7 November), the Greek Eurobank announced it has concluded an agreement with Piraeus Bank, for the acquisition of Piraeus Bank Bulgaria by Postbank, the Eurobank subsidiary in Bulgaria, for the price of €75 million.

According to the website of the Bulgarian weekly Capital, the other competitors were the Bulgarian American Credit Bank BACB, run by Tsvetelina Borislavova, a former partner of Prime Minister Boyko Borissov, Investbank run by businesswoman Petya Slavova, and an unnamed foreign investment fund, active in Central and Eastern Europe.

The Postbank press release said the transaction strengthens its position in the Bulgarian banking sector, where it will now have a market share higher than 10%, making the Greek bank the third largest in the neighbouring country.

Re-shuffling assets instead of selling

According to information obtained by EURACTIV, there has been little chance for the other bidders to be successful as the transaction had reportedly been decided by “big Greek boys” one year ago.

But the acquisition also points to a scheme whereby Greek banks do not sell their foreign units but simply re-shuffle assets, probably with the assistance of the Greek state. This obviously flies in the face of the EU’s whole idea of de-risking, as part of the measures to avert new banking and financial crises.

According to rumours in Sofia which EURACTIV couldn’t immediately verify, other bidders had offered a higher price for Piraeus Bulgaria.

Another issue is that of possible loopholes in the EU regulations, which allow foreign-owned banks in weak economies to keep €2.2 billion of Bulgarian funds in the parent banks in other countries.

According to information from open sources, OTP Hungary, the owner of DSK bank Bulgaria, UniCredit Italy, owner of UniCredit Bulbank, and Piraeus Greece, owner of Eurobank in Bulgaria, keep €2.2 of the Bulgarian savers’ money in the parent banks, on short-term nostra account deposits, and are rolling those deposits on a weekly basis to keep them permanently.

Under EU legislation, all banks have a restriction to lend only up to 25% of their capital, and 10% if they lend to related entities. An expert commented that in this strange scheme, however, the lending for the parent banks in Budapest and Rome is as much as 100%, and in the case of Piraeus, 130-140%.

Only Greek, Hungarian and Italian “parent” banks use this scheme, unlike the other foreign bankers in Bulgaria. The reason is that junk-rated countries find it difficult to raise money otherwise.

“Nobody gives money to Greece, but [Greek banks in Bulgaria] give Greece €600 million. They [the Greeks] cannot raise money elsewhere but it’s so easy for them to syphon money in Bulgaria. And if someone buys a [Bulgarian subsidiary] bank for €75 million and the next day takes out of the bank €75 million, it means they got it for nothing,” an international financial expert and investor told this website.

Asked if the Bulgarian National Bank BNB, who acts as a regulator, was corrupt or just unaware, the expert countered:

“What do you think?”. He added, however, that BNB had a “very limited toolbox”.

It is strange however how BNB lets money of the Bulgarian savers “work” in other countries, and not at home.

Other sources point out the collateral damage for Bulgaria resulting from the EU measures to fix Greece.

“Ten percent of the Bulgarian banking sector is for sale, under an authority which cares for Greece, not for Bulgaria”, a banking expert said, referring to the EU Commission. He pointed at the risks for Bulgaria also in the context of the country’s bid to join the eurozone.

EURACTIV asked the Commission to comment on the specific points of the re-shuffling of banking assets and the alleged use of legislative loopholes.

The EU executive sent a written reply saying it was following the implementation of the restructuring plans of the Greek banks through regular contact with the appointed monitoring trustee.

“The Commission does not comment on specific transactions of the Greek banks. We trust that the supervisors involved in the approval process of the deal would have considered all the relevant elements before approving the transaction”, the answer reads.

Prof. Dr. Georgios Orfanidis, Head of Legal Services of Eurobank, wrote to EURACTIV, expressing surprise from this article, which in his words contains false, inaccurate and defamatory information which may have consequences for the reputation of the company he represents.

In particular, Orfanidis calls the article “disinformation”, “constituting a concerted and intentional effort to undermine the activities of our company in Bulgaria”, a claim which EURACTIV refutes.

Asked by EURACTIV to comment on the bid by Eurobank for the acquisition of Piraeus Bank Bulgaria, Commission Vice-President Valdis Dombrovskis made it clear that the EU executive was following the file.

Dombrovskis started by saying that there was a limited role for the Commission, when discussing private transactions between banks.

“Of course, there are some state aid aspects which need to be assessed, to mention specifically Eurobank. The transaction is a complex operation and more details are needed to assess it. The supervisor [the Bulgarian National Bank, BNB] is expected to examine this deal carefully. From the Commission’s side, we have been monitoring Eurobank’s compliance with its commitments under the 2015 state aid decision. At this stage, monitoring indicates that Eurobank is in compliance with its commitments, but of course, as I said, we are still assessing this operation”.

He added that there were certain prudential requirements which banks need to meet in case of mergers or acquisitions, and that it was the task of supervisors to make sure that the requirements are met. This, he said, was part of the Banking Union framework, and the Commission was not following any private transaction between banks.

The issue remains that the leniency or largesse of the ECB toward Greece may but the Bulgarian banking system at risk. BNB is of course aware, but it is caught between a rock and a hard place: it doesn’t want to block a transaction with a neighbouring EU country, but it also wary to let Greece export its problems into Bulgaria.

The latest Eurogroup report on Greece says “the amount of the eligible DTAs (deferred tax sets)  to be converted into DTCs (deferred tax credit) by the four systemic Greek banks is €15.9 billion as of June 2018, which is equivalent to around 59% of their Common Equity Tier 1 Capital”.

The real point is that the kind of DTAs and DYCs that Greek banks are allowed to use in calculation of capital are not at all allowed to be used in other countries in the EU, other than the weaker economies of Italy, Spain and Portugal.

This is well covered in the ECB opinion on Greek DTC, and in this article by the Bruegel think-tank. The Bruegel article points out that of the four countries Greece has the highest use of the DTC’s.

Bulgaria needs to please the EU in view of its bid to join the rurozone bid. The ECB will conduct a comprehensive assessment of six Bulgarian banks, including the three largest banks in terms of assets, UniCredit Bulbank, DSK Bank and United Bulgarian Bank. With the acquisition of the Piraeus branch by Eurobank (Postbank), the latter is likely to become the third largest. It should not be in the interest of Bulgaria to have such a bank scrutinised. 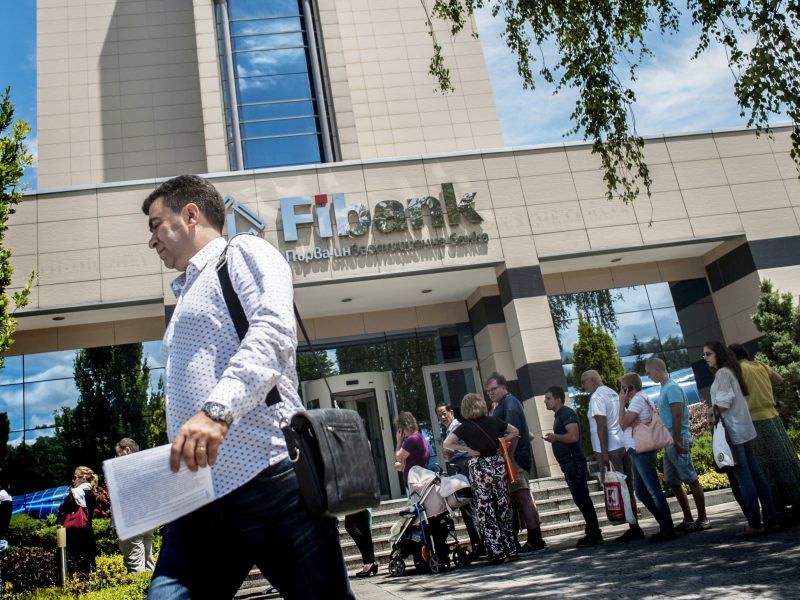 The table below summarises funds held with the Parent (respectively in Rome, Budapest and Athens) for four banks in Bulgaria and compares them to the size of the banks’ capital.

The data confirm that movements of funds, amounting to over 100% of the bank equity, and a total of over €2 billion, were taken out of Bulgaria to the “parent” banks. The data were taken from the yearly financial accounting of the four banks, respectively for Unicredit Bulbank on page 166, for DSK – on page 80, for Postbank – on page 119, and for Piraeus – on page 84.

An expert with detailed knowledge of the Bulgarian banking sector said that this money should serve to make function the economy of Bulgaria, not of Greece, Hungary or Italy.

EURACTIV asked BNB to comment on its plan to act as supervisor, but hasn’t received an answer for the time of the publication.

One response to “Greek banks’ foul play suspected in Bulgaria”