The Tempest jet-fighter is still in the design phase and is only due to enter service in the mid-2030s. [Photo: BAE]

The company says it is “examining all options” for the plane’s propulsion system as part of the Tempest’s development period and is working closely with engine developer Rolls-Royce.

BAE’s manufacturing director, Dave Holmes, told a webcast on Wednesday (15 July) that he “wouldn’t rule anything out. If you’re looking at something that’s going to be in service out to 2050 to 2060 and beyond, all of those options are very feasible.”

The Tempest, first announced back in 2018, will be the UK’s first new jet-fighter in decades. Early specs say it will be equipped with artificial intelligence, a virtual cockpit setup and laser weapons, which are likely to have substantial power demands.

Rolls-Royce already confirmed in January that it had successfully developed a “world-first electrical technology” for the Tempest programme, which aims to address the “unprecedented levels of electrical power demand” expected on future aircraft.

Although all-electric engines are still in their infancy, Rolls-Royce has a strong track record, having collaborated with Airbus on a hybrid propulsion system that was due to undergo test flights next year.

That project was shuttered earlier this year due to the economic impact of the coronavirus outbreak but the engine builder is pressing ahead with ground trials and has pledged to use the know-how already generated in other projects.

BAE has also partnered up with Williams Advanced Engineering, which has helped develop battery systems for the all-electric Formula E motorsport series and works closely with its parent company, Formula One team Williams Grand Prix.

That tie-up could offer clues to where BAE is going with the Tempest, as Formula One has no plans to ditch the internal combustion engine anytime soon and is instead pioneering ultra-efficient hybrid powertrains that include kinetic energy recovery systems.

Given the immaturity of electric flight, it seems likely that batteries will be a complement to existing jet fuel-powered engines, rather than a replacement. At least not before the replacement for the Tempest enters service around the mid-century mark.

E-planes are, nevertheless, making significant progress. Last month, EU aviation regulator EASA certified a battery-powered two-seater for worldwide use for the first time, while a UK-based startup took to the skies in what is touted as Europe’s largest e-plane.

Aerospace giant Airbus is also looking to the future and although it abandoned its hybrid project earlier in the year, it now has a slice of €1.5 billion in French government funding to develop new propulsion tech.

According to the conglomerate, hydrogen is “one of the most viable” options and Paris has set the sector a deadline of 2035 to test and produce a zero-emission replacement for the hugely popular A320 commercial aircraft.

The defence branch of Airbus has teamed up with Dassault Aviation to build a rival sixth-generation fighter jet as part of the Future Combat Aircraft System (FCAS) project, backed by France, Germany and Spain.

Military spending could yet accelerate aviation’s shift towards zero-emission flight. Russian defence firm Tupolev built and tested a hydrogen-powered plane in the late 1980s but its further development was curtailed by the fall of the Soviet Union.

If the world’s armed forces embrace the idea of fuelling their war machines with electricity rather than oil – thus cutting supply dependence on often volatile regions of the world – the subsequent R&D is likely to trickle down to the civilian sector. 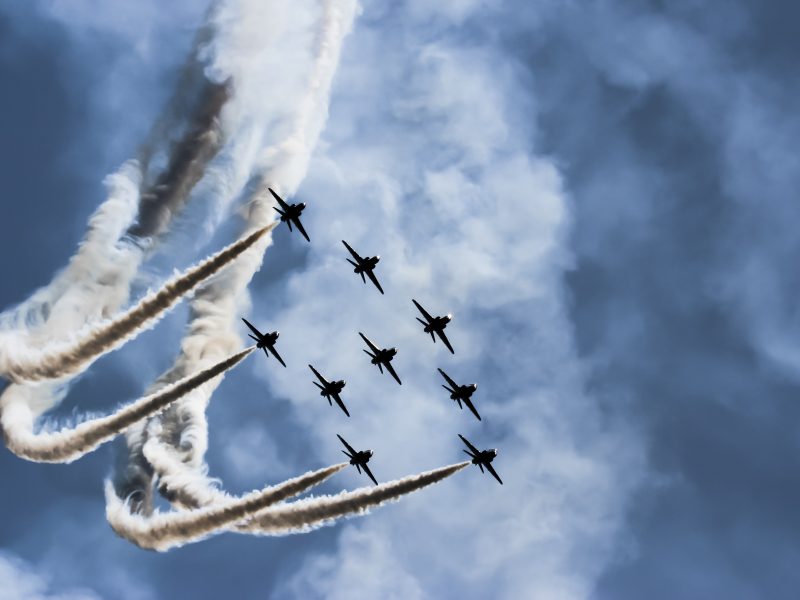