Björn Nykvist is a Research Fellow at the Stockholm Environment Institute.

The prospects for electrifying heavy vehicles are uncertain and the subject of fierce debate. On the one hand, battery-powered electric cars with long-range capacity are on the roads, and battery electric buses are already cost competitive in markets with high diesel prices, according to the International Energy Agency.

Yet, on the other hand, the scientific literature remains sceptical about trucks becoming battery operated due to the cost and weight of the large battery packs.

My recent research for the Stockholm Environment Institute (SEI) offers new insights that can inform this debate. The positive trends on battery technology and cost continue to increase the competitiveness for electric vehicles.

As electrification gains momentum, and the power sector becomes increasingly renewable, electrification of freight transport can start to play a very important role in reducing greenhouse gas emissions to help reach the goals of the Paris Agreement. Indeed, the IPCC Special Report on Global Warming of 1.5 °C show that rapid electrification of energy use is needed across sectors to achieve deep decarbonisation goals.

This provides fuel – or should we say electric current? – for arguments suggesting that we should “electrify everything”. And, it means that the electrification of transport should intensify.

Decarbonisation through electrification – a case for optimism

The question according to our stakeholders (vehicle manufacturers, fuel providers, logistics companies, and policy-makers) is thus not whether electrification will play a central role in transport systems of the future, but how.

We find that both battery electric trucks and the electric road systems (using overhead catenary wires as shown in the accompanying image) now spearheaded by Sweden and Germany, can be competitive with diesel trucks in the coming decade.

Hydrogen fuel cell-powered electric trucks are more expensive, but it is worth noting that the technology is now being pursued by American newcomer Nikola Motors, with Norwegian partner NEL on hydrogen production and refuelling technologies.

Moreover, hydrogen is emerging as a critical solution to decarbonise steel making. The situation ask for more analysis of synergies and dependencies across the individual parts of the new fossil-free energy and transport systems.

In this new fossil-free energy landscape, battery technology plays the central role. While the verdict is still out on the role of pure battery trucks, batteries will still be an enabling technology. Whether as a means to increase efficiency in hybrid electric vehicles, as part of a electric road systems or as a component of hydrogen fuel cell vehicles to manage peak power.

In 2015, I showed that a rapid reduction in cost of battery packs used in electric vehicles had taken place.

My latest research shows that the positive trends continue for complete battery packs capable of reaching a level of slightly above 200 USD per kilowatt hour (kWh) in 2017. Can this trend continue?

Niels Bohr, a leading scientist of modern physics in the early 20th century, famously said “prediction is very difficult, especially if it’s about the future”. Nevertheless, with the right tools, some near-term developments can be characterised.

My research finds a learning rate in battery pack cost of around 18%  ̶  meaning that each time the total produced historical volume of batteries (in kWh) doubles,  another 18% drop in cost occurs. Currently we see such a decline in costs almost annually.

With modest assumptions on continued growth of electric vehicle sales (reaching 60 million electric vehicles sold by 2030), the cost of battery packs can be expected to approach 100 USD/kWh within a decade. But uncertainty is high, and progress can be both slower and faster.

The analysis, for example, does not take into account any additional positive synergies that will surface as batteries penetrate applications such as stationary storage, electric buses, and electric trucks.

But all in all, the outlook is now strong enough to argue that battery electric vehicles, from light cars to heavy trucks, have a pivotal role to play in reaching climate goals. 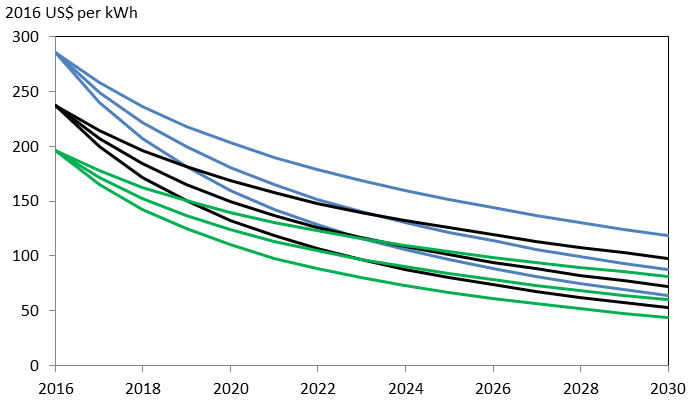 * Detailed descriptions are available in the research paper.

One response to “Is technology about to overcome the ‘too heavy to electrify’ obstacle?”