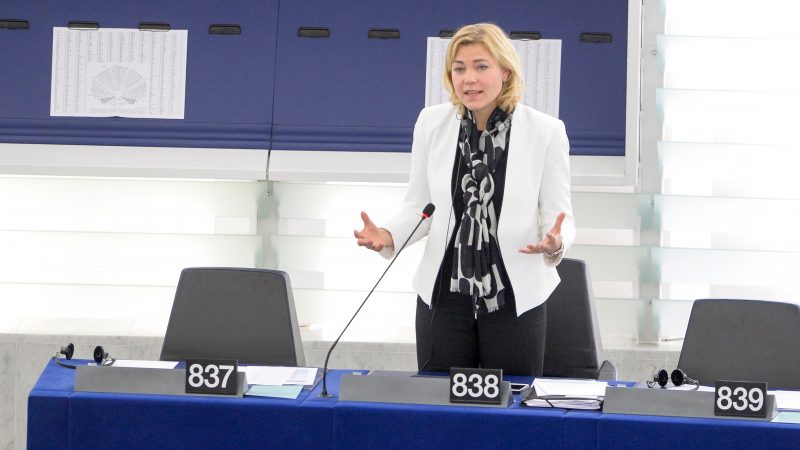 Henna Virkkunen is a Finnish lawmaker with the EPP Group. [European Parliament]

In a landmark decision on 31 May, the EU agreed to end most Russian oil imports by the end of the year. Renewable biofuels have been touted as a means to partially replace the embargoed oil, as the domestically produced fuels can be blended with petrol and diesel.

However, biofuels have proven controversial, with green campaigners seeking to reduce their production. To discuss the role of biofuels in plugging Europe’s oil supply gap, EURACTIV spoke with MEP Henna Virkkunen, who is actively engaged in transport issues.

Henna Virkkunen is a Finnish lawmaker with the centre-right EPP Group. She is a member of the Parliament’s transport and industry committees.

The EU recently agreed on a partial Russian oil ban. One potential source of liquid fuel being put forward to meet the shortfall is biofuels. Do you believe ethanol and biodiesel have a role to play in displacing Russian fossil fuels in the transport sector?

Yes, it is clear that sustainably sourced biomass, including biofuels, plays a big role in the process of reducing EU dependency on Russian fossil fuels.

Considering that currently biomass covers around 60% of EU renewable energy sources, and that we need to reach our ever-stricter climate goals already by 2030, it is clear that biofuels are needed to cut emissions quickly in various different modes of transport.

Some NGOs have rejected calls for more biofuels, arguing that food-and-feed biofuels lead to land-use change abroad. Do you agree with this?

I would respond to these concerns that sustainable production of biofuels builds mainly on waste and residues rather than on food crops. We need to incentivise especially biofuels production which builds on an efficient circular economy based on raw material use, where each raw material flow is used to maximise the value of the feedstock and to avoid creating any waste.

The European Parliament recently voted to back a ban on the sale of diesel and petrol cars in 2035. Did you support this position?

I did not support a total ban, but instead I supported the position that 90% of vehicles should be zero emission by 2035. I see that there is also room for diesel and petrol cars, as what matters most is not the type of car per se but the lifecycle emissions of the vehicle and the type of fuel used.

We need to be ambitious but also realistic. Making use of the existing car fleet is a cost-efficient way to gain emission reductions quickly.

France has seen considerable growth in E85 (up to 85% ethanol fuel blend), with price considerations largely driving uptake. Industry says this can lead to greenhouse gas GHG savings of around 70%. But NGOs have been more negative. Would you support more European countries providing higher ethanol blends at the petrol pump, such as E85?

I believe it’s not the job of us, decision-makers, to choose any particular winning technologies or solutions. Our job is to set goals and then allow for industry and the member states themselves to find the most cost-efficient ways to reach those goals.

There is no one-size-fits-all solution – higher ethanol blends are one efficient measure to contribute to the transition.

There have been concerns that biofuel production can harm food security, particularly given shortages of some crops due to the war in Ukraine. The biofuels industry has branded the claims “ridiculous”, arguing that biofuels can help to bolster food security as they provide animal feed as a byproduct. Do you have a position on this debate?

Concerns on food security due to the Russian war in Ukraine are very legitimate and need urgent addressing. The EU has to take responsibility and help developing countries dependent on Ukrainian food exports to get through the food crisis. However, sustainably produced biofuels should not contribute to the problem as their production builds increasingly on waste and residues.