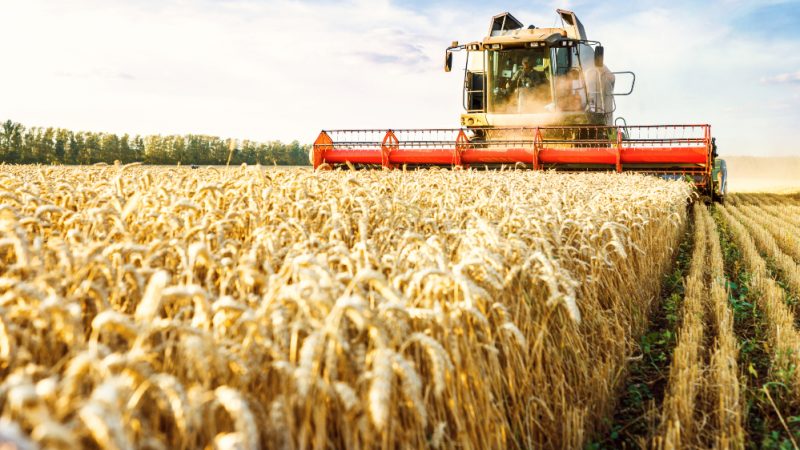 Ukraine and Russia are responsible for around a quarter of globally traded wheat and barley, 15% of corn and over 60% of sunflower oil, according to T&E statistics. [Aleksandr Rybalko / Shutterstock.com]

Around 10,000 tonnes of wheat – equivalent to 15 million loaves of bread – are burned daily as ethanol in EU cars, according to a recent study by Transport & Environment (T&E). The clean mobility NGO said it was “immoral” to do so amid rising food prices prompted by Russia’s invasion of Ukraine.

“Every year, we burn millions of tonnes of wheat and other vital grains to power our cars. This is unacceptable in the face of a global food crisis,” said Maik Marahrens, biofuels manager at T&E.

“Governments must urgently stop the burning of food crops in cars to reduce pressure on critical supplies,” he added.

T&E are among a group of NGOs calling on EU governments to immediately ban feed crops for biofuel production, warning that continuing to do so may lead food prices “to spiral out of control”.

The price of wheat – used in ethanol production – and sunflower oil – used in biodiesel – have risen significantly since the outbreak of war.

Ukraine and Russia are responsible for around a quarter of globally traded wheat and barley, 15% of corn and over 60% of sunflower oil. Dozens of countries rely on these exports for food security.

According to the T&E study, preventing the EU importation of wheat for biofuels will allow around 20% of Ukraine’s wheat supply to be exported for food production to countries such as Egypt.

The NGO also slammed what they say are industry attempts to bolster their position off the back of the conflict, arguing that industry has put biofuels forward to replace Russian fossil fuels.

“The biofuels industry is stepping up its lobbying efforts to push for more grains like wheat and corn to replace Russian oil. In doing so, it is cynically taking advantage of people’s concerns over fuel prices, putting profit over food security,” said Marahrens.

Not ‘food versus fuel’ but ‘food and fuel’

The industry has come out strongly against the T&E-backed study, arguing that the NGO is purposefully ignoring that biofuel production creates food and animal feed in addition to fuel.

“[Our industry] is an important domestic source of high-protein animal feed and other products that reduce the need for EU feed and food imports. Each tonne of renewable ethanol produced automatically generates 1 tonne of such animal feed, and in 2019, European ethanol producers supplied overall more than 4.5 Mt of it,” said Vackeová.

Both ePURE and fellow trade association the European Biodiesel Board (EBB) emphatically rejected the narrative that biofuels producers have pushed for fossil fuels to be replaced outright with biofuels. Neither organisation has argued for biofuel targets to be increased in response to the crisis, they said.

Xavier Noyon, secretary-general of EBB, told EURACTIV that the industry would not advocate that biofuels replace all fossil fuels as the position is unrealistic.

“We have a fundamentally different approach to fossil fuel substitution: we consider that biofuels will not be able to replace all fossil fuel in transport, but every per cent counts,” he said.

Instead, he said, the industry has highlighted biofuels’ contribution to energy independence, urging member states not to unilaterally cut biofuel production in response to concerns about rising food and petrol prices.

“The European biofuel producers have not requested to increase the blending of biofuels because of the crisis. They have simply reiterated the need to not reduce our efforts,” said Noyon.

The EBB head also questioned the link between biofuels and food prices, arguing that other issues are more significant in determining cost.

“While it’s obvious that during this crisis, as well as before it, we have seen high food prices, no significant relationship between biofuels and global food prices has been observed in the last years. Many other factors, such as the oil price, have a much more significant impact on food prices,” he said.

Noyon further stressed that curtailing biofuels would require more significant amounts of fossil fuels to make up the shortfall.

“European produced biodiesel is the main tool to decarbonise the road transport sector – which is still reliant on more than 90% fossil liquid fuels,” he said. “Today and for the foreseeable future, the only thing that would replace biodiesel would be fossil diesel.”