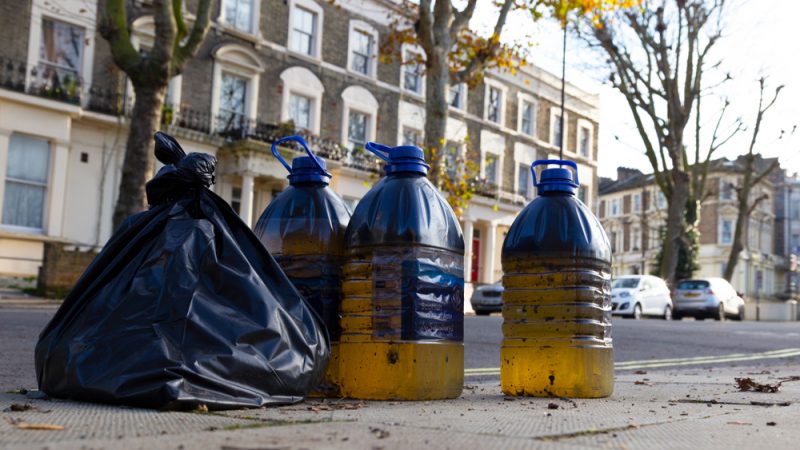 “The Commission will respond to the European Ombudsman within the deadline set by her, i.e. February 2022,” the spokesperson added. [Shutterstock/Kauka Jarvi]

“The Commission has taken note of the European Ombudsman’s recommendation in this case. The relevant Commission services are currently analysing the case,” an EU spokesperson told EURACTIV .com.

“The Commission will respond to the European Ombudsman within the deadline set, i.e. February 2022,” the spokesperson added.

But the current directive does not distinguish between domestically collected oils and those imported from third countries. Critics suggest some contain palm oil, which the EU decided to phase out to slow deforestation in tropical countries.

NGO Transport & Environment (T&E) published a report in July 2020, which found that more than half the UCO used in Europe for biodiesel in 2019 was imported (1.5 million tonnes out of 2.8 million tonnes). The most significant share came from China (34%), and about 20% came from Malaysia and Indonesia, the world’s biggest palm oil producers.

The case opened in September 2020 after a complainant requested access to a list of all countries of origin of UCO from 2016 to 2019, together with the volumes of UCO feedstock collected for each country for each year.

After a long delay, the Commission replied, saying it did not hold any document corresponding to the complainant’s request. But the Ombudsman found that the executive did have the requested information on the countries of origin and the volumes of UCO collected.

However, the Commission did not accept the EU Ombudsman’s solution, which the Ombudsman described as “inexplicable”.

EURACTIV had contacted the European Commission in June 2020 and asked the same question. The executive had then replied that it did not have a “complete overview” of UCO’s origins.

Commission relies on a new database.

EURACTIV was informed that currently, the executive receives only data from the voluntary schemes that the Commission has recognised. But these schemes, do not cover the entire market, and it is not certain that all biofuels certified by the schemes are consumed in the EU (UCO-based biofuels are also promoted in third countries).

However, in a report, the European Court of Auditors questioned the reliability of the voluntary schemes, emphasising the risk of fraud, especially when it comes to biofuels such as UCO.

The EU executive believes that things will change as the revised Renewable Energy Directive (RED II) has put in place an EU-wide database to centrally trace all biofuels consumed in the EU. The database development started in 2020, and a pilot phase is planned to be finalised by the end of 2021.

Sources close to the issue said that after a period of testing and populating the database with data, it is expected to be operational by the end of 2022.

Critics suggest that even this database won’t bring transparency in the biofuel sector, and it comes too late, allowing fraud to continue in the following years.

According to Eurostat figures, in 2019 – when the 1.7% cap on feedstocks such as UCO and animal fats did not apply – the use of UCO in transport increased significantly. The Netherlands, Italy, Portugal, Ireland and Hungary exceeded the 1.7% usage.

The 1.7% cap applies as of 2021, and estimations suggest that they continue a rising trend. EURACTIV was informed that several member states have already asked the Commission for derogations from the 1.7% cap, however, the executive has rejected their request. 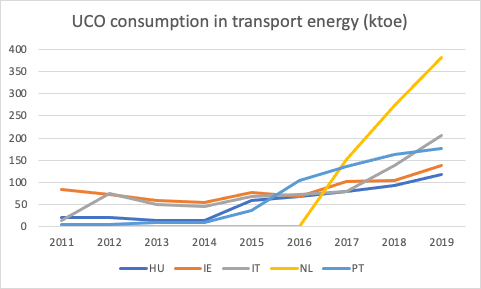 According to Eurostat figures, in 2019 – when the 1.7% cap on feedstocks such as UCO and animal fats did not apply – the use of UCO in transport increased significantly. [Source: Eurostat]