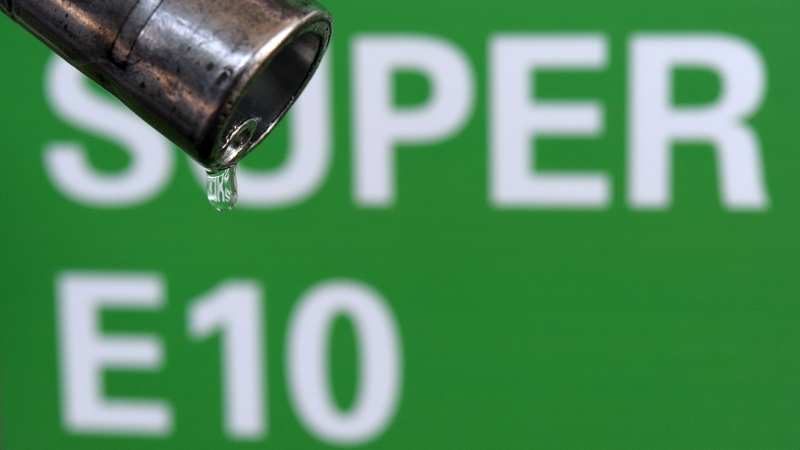 A drop of biofuel E10 slips from a fuel nozzle at a petrol station in Bamberg, Germany. [EPA/DAVID EBENER]

Favouring electrification while ignoring low-carbon liquid fuels will hinder the bloc’s efforts to decarbonise road transport, a prominent industry body has said ahead of the release of the EU’s climate law package.

“Just as there is no single type of car, there is no single way to decarbonise road transport. In the fight against climate change, the EU needs every sustainable solution it can muster – and that includes renewable and low-carbon liquid fuels,” the group said in a statement.

The EU should “adopt a technology-neutral approach that makes the best use of available options with proven emissions-reduction credentials, including biofuels from crops that meet stringent sustainability criteria,” according to the lobby group.

The statement, signed off by 10 trade organisations, positions low-carbon liquid fuels as a necessary complement to electromobility that is capable of reducing the emissions of the current fleet of internal combustion engine vehicles.

Environmental groups have pushed back against the statement, however, arguing that a focus on biofuels will delay the switch to zero-emission vehicles.

“The fuels lobby is pushing fake climate solutions when emissions-free vehicles are a real option for many Europeans,” Laura Buffet, energy director at clean mobility NGO Transport & Environment (T&E), told EURACTIV. “This is a last-ditch attempt to prolong their current business models, instead of reforming for the future.”

“Taking the whole life-cycle into account, the majority of EU biofuels – crop biodiesel like palm and soy – are actually worse for the climate than fossil diesel,” she said.

“When the biofuel lobby refer to ‘proven emissions-reduction credentials’ they mean the emissions criteria in the EU Renewable Energy Directive. But those only cover emissions from processing and transport – not the emissions from burning the fuels or the carbon costs of using land for biofuel crops,” he told EURACTIV.

“Sustainable in every sense”

But claims that biofuels are more damaging than fossil fuels are strongly disputed by the industry.

“The biofuels we produce are sustainable in every sense of the term,” Xavier Noyon, secretary general of the European Biodiesel Board (EBB), told EURACTIV.

Noyon emphasised the sustainability framework that EU biofuel producers must adhere to, which he said “encompasses traceability along the value chain, as well as third party certification”.

Noyon also accused green groups of choosing attention-grabbing statements over a more nuanced and realistic presentation of biofuels, particularly in their depiction of indirect land use change (ILUC).

ILUC refers to how biofuel demand may influence producers in the developing world to expand croplands, either to grow biofuels or to grow food crops to replace any shortfall caused by a switch to biofuels. This expansion can lead to the release of more carbon emissions as a result of the land-use change. Industry has questioned the complex formula behind ILUC measurement.

“If you include an updated ILUC impacts estimation based on the newest GLOBIOM insights and the actual development of biofuels and not on the scenario elaborated 10 years ago, every tonne still saves over 2 tonnes of CO2 emissions”, he said.

The criticism from green groups also overlooks the biofuels industry’s contribution to the circular economy, said Noyon, highlighting that the industry provides a means to productively reuse waste and residues from agriculture.

“Our biofuels are affordable, which facilitates inclusive climate policies. They also have the benefit of being available immediately for use in all transport modes,” he added.

The EU is set to unveil the so-called “Fit for 55” climate package on Wednesday (14 July), which will set out a legislative path to reducing emissions across the bloc by 55% by 2030.

The package, which comprises over a dozen laws, is part of the EU’s push to achieve carbon neutrality by 2050.

A leaked draft of the EU’s renewable energy law, seen by EURACTIV, reveals plans to increase the target for renewables to 38% – 40% by the end of the decade, with a planned increase in renewables in the transport sector from 14% to 26%. A sub-target has been set to boost the use of advanced biofuels from 3.5% to 5.5%.

Biofuel producers are anxiously awaiting the final version of the directive, which will strongly influence the future of the industry in Europe.

The industry is also waiting to see the updated CO2 standards for new cars and vans, which are expected to require vehicles to be almost emissions-free.

An early draft of the regulation includes a target of a 60% to 90% reduction in emissions from new vehicles by 2030.

Critics, such as the liquid fuels industry, say the move violates the European Commission’s commitment to “technology neutrality”, as it penalises combustion engines in favour of a shift towards e-vehicles.