The European Union is heavily reliant on feed imports: 70% of its protein feed comes from the Americas, mainly from Argentina and Brazil. [Martin LaBar/Flickr]

The use of emotionally misleading terms needs to be avoided if we are to have efficient policies, writes Zoltán Szabó.

Dr Zoltán Szabó is a sustainability consultant in the bioenergy industry.

Traditionally, European farmers produce grains such as corn and wheat and most of them are used as feed. In the modern bioeconomy that chain is replaced by a value-added process based on the concept of biorefineries. A biorefinery based on corn or wheat may be viewed as an animal feed production facility co-producing bioethanol. These products are produced in roughly equal quantities. Importantly, the valuable components of the grain, the proteins, fats, fibres, vitamins, minerals are captured in an animal feed called DDGS (Dried Distillers Grains with Solubles), and the less valuable components, the starches are used to produce bioethanol.

The European Union is heavily reliant on feed imports. 70% of its protein feed comes from the Americas, mainly from Argentina and Brazil. These imports are GM soybeans and soy meals, which according to environmental organisations such as the WWF contribute to deforestation and other environmental impacts. If the EU is to advance its GMO-free policy and refrain from putting an additional burden on the forests and cerrado in the Americas, it should increasingly meet its domestic animal feed demand from European production. European produced soy is one such alternative but is not available in sufficient quantities. The European ethanol industry produces 5 million tonnes of DDGS each year and that has a substantial impact on replacing soy imports, currently amounting to 35 million tons.

It is often argued however that food-based biofuels should be phased out because of food security concerns. This is, however, an ideological perspective, and reality is different. Firstly, there is overwhelming evidence that European bioethanol has not contributed to price increases in foodstuffs, and the prices of cereals in real terms are as low today as in the ‘80s. Secondly, while global food security is indeed a concern, the problem relates to distribution rather than quantity; the world has never produced this much cereals, global grain stocks are forecast for the first time, to top 500 million tonnes by the end of the 2016/17 season, according to the International Grains Council, up from 300 million in 2008/09. Most importantly, however, no food is used in bioethanol production. Moreover, no real feed is used either and no valuable feed component is taken out of the system. How is this possible?

Price developments in feed grains and DDGS show that DDGS commands a price premium over corn. Animal farmers have in the past two years been prepared to pay 20-50% more for a tonne of DDGS than for feed corn (see chart), its primary feedstock. Why would anyone pay more for a product that has had a component, starch, removed from it?  Farmers are rational and they are real experts in animal husbandry indicating that there is something in DDGS that brings value to farming. The short answer is that it is the protein that animal farmers are really after, and DDGS is rich in protein. The longer answer is that starch is only energy and given that animal rations are long in that component, it is no real loss to get rid of it from the feed. As long as Europe is short of plant protein, a feed rich in protein, such as DDGS, is particularly valuable. Nothing of value in the feed is lost when DDGS is produced, a fact that is confirmed by the market giving it a higher value than the corn/wheat from which it is made. Markets show that no real feed component is lost when DDGS and bioethanol are produced. 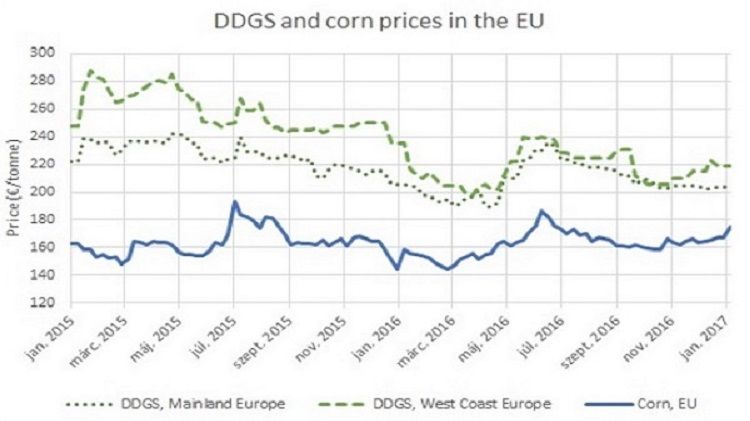 The efficient processes of a biorefinery contribute substantially to the bioeconomy. A modern conventional ethanol biorefinery produces a growing array of products. In addition to animal feed and renewable fuel, these include corn oil, wheat gluten, and other bio-based products. New uses for CO2 are also being developed. All these products add value to the simple value chain of producing feed grain traditionally used as animal feed. Given the innovative nature of the bioeconomy, the added value is poised to increase with the emergence of newer and newer products coming onto the market. In the near future, the value created by biorefineries is expected to double the value produced by growing feed corn in the first place. Of course, climate and rural development benefits come on top of all that.

A key EU objective is to increasingly tap the potential in its bioeconomy thereby creating economic value, contributing to climate change mitigation, providing additional income streams for farmers and creating jobs in disadvantaged rural communities around Europe. However, that is not happening. The European Commission is proposing in its recent winter energy package to reduce the share of conventional biofuels, including bioethanol, halving it between 2020 and 2030.

If bioethanol consumption is reduced, so will DDGS production, on a one to one basis. GM soy imports, with deforestation in their wake will inevitably increase. Economic value and jobs will be lost in the bioeconomy, further pressuring vulnerable rural communities in decline in Europe. More greenhouse gases will be emitted as bioethanol use will be replaced by petrol.

The battle for adopting a revised Renewable Energy Directive has just started. It is up to Parliamentarians and the member states to change the course the Commission has embarked on. More bioeconomy is needed, not less. The first step is to get rid of all the loaded terms and let evidence based science reign.