This article is part of our special report Connecting Central Asia.

Kazakh political analyst Zhumabek Sarabekov discusses the Skripal poisoning case, the war in Syria, and the geopolitics of Central Asia, including the role of the EU.

Zhumabek Sarabekov is a senior expert at the Institute of World Economics and Politics of Kazakhstan.

I have been to Kazakhstan three times over the last year. Amazing things have been happening in the world in the meantime, the latest being the risk of a major trade war between the US and the EU, and the tensions with Russia around the Skripal case. What does the world look like seen from Kazakhstan?

I agree that there is less and less security, including strategic security, because major players are unable to have a dialogue. We can interpret the recent statements of the Russian President at the Federal Assembly [On 1 March Putin staged an unusual display of military might and warned that Russia has new high-technology nuclear weapons that he said could overcome any defences] as a call on the West to recognise Russia as a world might and to re-format relations. However, we also see that Western states have no intention to strike a compromise with Russia. This puts in jeopardy basic agreements such as the Intermediary-Range and Shorter-Range Missiles treaty, the Strategic Arms Limitation treaties – their terms expire shortly and we see no interest from the US to prolong those treaties.

So an arms race is beginning. We see that cyber-warfare is actively developing, which also represents a threat for the whole world, and I can agree with experts who say we are already witnessing a large-scale hybrid war in the information sphere, in the sphere of economics in terms of sanctions and in cyberspace.

Who is to blame? Putin’s testosterone?

No, we should not blame only Russia, as often happens in a family conflict, it’s not the fault of only one side. We are witnessing the incapacity of the world’s major countries to work towards a compromise between themselves. From the perspective of Kazakhstan, there is a growing risk that an incidental conflict can escalate into a full-scale conflict.

In its capacity of President of the United Nations Security Council last January, Kazakhstan has called for reinforcing the strategic dialogue between states, for strengthening the regime of nuclear non-proliferation, to jointly fight terrorism, because the threat of terrorism is taking very big proportions, we see that its nature is changing.

There are more and more “lone wolves” which are very hard to be detected. For Central Asia, from where many foreign fighters have originated, and have fought alongside Daesh in Iraq and Syria, there is a risk with some of them who are returning.  At the same time, some of those who return should be rehabilitated, there are women, children, and it would be a mistake to treat them as terrorists.

Kazakhstan has good expertise on Russia, would you share your thoughts about the Skripal case?

It’s very difficult to comment at this stage because there is too little information. Nevertheless, I think what is important is to conduct a thorough investigation with the participation of the Russian side. It is clear, however, that at this stage this is not happening. It is important for the UK and Russia to find a mutually acceptable format to regulate this problem because the downside is already more than enough. It’s in nobody’s interest to increase the confrontation.

Kazakhstan succeeds in having good relations with the USA, your president Nursultan Nazarbayev was received by Donald Trump in the White House last January, also with Russia and China. How do you succeed in these crazy times?

It’s not easy and it’s becoming more and more complicated, with contradictions among big players accumulating. Nevertheless, the multi-vector policy has proven to be optimal for Kazakhstan. It has enabled a stable and sustainable development of our economy and of our state. We succeed as you say because our country has resources.

In the region, others too profess the multi-vector policy, but unfortunately, they don’t have the resources to conduct such a policy. Kazakhstan has accumulated such resources thanks to its economic potential, thanks to its very active work on the foreign policy stage, including at the UN Security Council, with its participation in various regional organisations. This is a terrain for manoeuvre, which allows keeping equal distance with the key global players.

Your country has been active in the framework of the Astana process, in the context of the Syrian tragedy. But the situation on the ground is hardly improving. What is your comment?

Regrettably, this is so, but it would be wrong to say that the efforts to regulate the situation brought no results. In the framework of the Astana process, four de-escalation zones have been created…

But one of them is precisely Eastern Ghouta…

What is your analysis of the meeting of the leaders of the Central Asian countries on 15 March?

The key factor is, of course, Uzbekistan, the new President, the new leadership of the country are in favour of an open dialogue with their neighbours. In the beginning, there was a lot of scepticism as to how long this could last, but now it’s clear that Tashkent is serious about this new policy.

I am told that personalities play too much role in Central Asia. How long will it be like that? 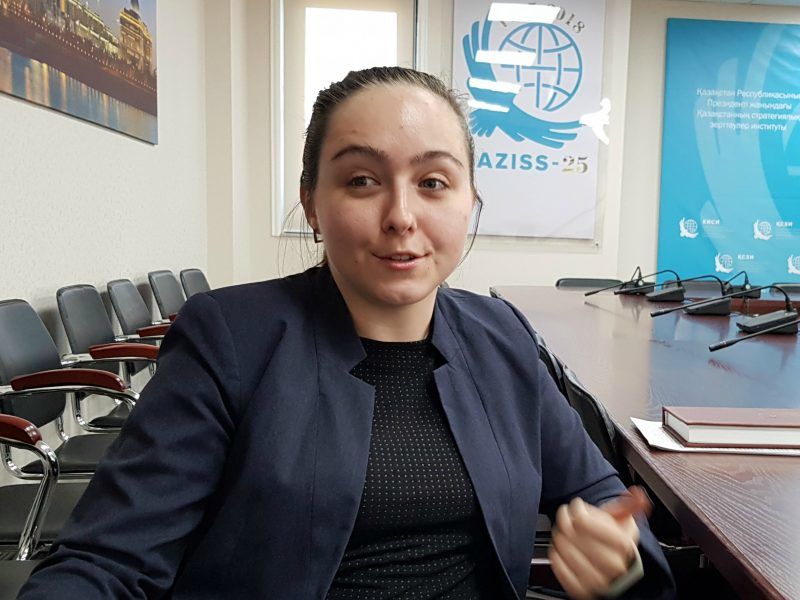 A change at the helm of Uzbekistan 18 months ago became a game-changer and greatly improved relations in Central Asia, where the personality factor remains very important. In an interview, researcher Anastassiya Reshetnyak assesses the geopolitical situation, relations in the region and with the EU.

For the situation to change, institutions are needed. However, with regard to the Central Asia cooperation, the institutional side, the creation of a supranational union is a matter for the more distant future. We will live and we will see.

Turkmenistan’s policy of neutrality seems to be an obstacle for regional structures?

We observe that Turkmenistan’s foreign policy is also changing. Faced with difficulties in the economy, in the security sphere, Turkmenistan is becoming more active in regional cooperation.

What is the importance of the Chinese One Belt One Road initiative for your country and Central Asia?

The importance is huge because at this time few would be ready to offer investment, fresh money for infrastructure projects. On the other side, One Belt One Road doesn’t have as an objective to reinforce Central Asian cooperation. Nevertheless, the result will be the improved transport connectivity in the region, leading to better trade opportunities, and lifting barriers, also in the field of investments, of administration, customs etc. One of the multiplication effects of One Belt One Road could be precisely the improved connectivity of the region, which will lay the ground for better economic relations. But we are also aware that the project entails geopolitical risks.

One of the greatest risks for Central Asian integration is related precisely to the external factors. It’s difficult to say that the region is geopolitically autonomous. There are countries which geopolitical players can influence. And their influence can also put brakes on the process. In the leaders’ statements, it was said that their meeting is not directed against anyone. These are realities we should take into account.

What does the EU look like from your perspective? A sick body?

I guess I’m a Euro-optimist. I wrote my thesis on the EU. Many speak of the crisis of European integration, but I think the crisis creates the conditions for the Union to emerge stronger from it. Which probably means moving from an economic union toward a political union. The Europeans will decide, but we would like to see a strong EU.

But the present-day problems influence negatively the EU’s capacity to conduct a foreign policy. The EU will adopt a new strategy for Central Asia in 2019 with a general objective to reinforce cooperation, but it’s difficult [for the EU] to enforce a common foreign policy because it requires consultations, coordination and is a lengthy process. This is the downside for the EU as a geopolitical player in the region.

The multi-vector policy needs a strong EU. And it should be reminded that the EU countries are for Kazakhstan the biggest trade partner, the biggest investor. We don’t want to make wrong geopolitical choices. We want to cooperate at the same time, as we are already doing it, with Europe, with Russia, with China, with the Islamic world, with the US. For us, the EU is necessary.

Do you believe the North Korean problem can be solved?

At least we can expect results from the meeting between Donald Trump and Kim Jong-un.

Will you propose to host the meeting?

In theory, everything is possible.