Fraser Cameron: I don’t think the EU is hostile to New Silk Road

As long as the principles of the OECD, the World Bank and the IMF on transparency, public procurement and sustainable development are observed, the European Union is not hostile to China’s New Silk Road project, Fraser Cameron told EURACTIV.

Fraser Cameron is the director of the EU-Asia Centre, a think tank dedicated to promoting closer relations between the EU and Asia, established in 2011. He is a former British diplomat and EU official, and a visiting professor at several universities in Asia.

I’m coming back from Kazakhstan, where I attended a series of events dedicated to the New Silk Road, or to the One Belt One Road initiative. I think there is a branding problem here…

… I know, I keep telling the Chinese, it’s a stupid thing to keep changing the name. They had a very good name, New Silk Road. Everyone in Europe and most of the world understood the Silk Road. And then they switched to One Belt One Road, and then switched again to Belt and Road initiative, which sounds like a road safety campaign. In terms of branding, as you say, there hasn’t been a good development.

“One Road” is very confusing because it’s not one road, the idea is to have many, many roads…

I don’t know. I think the reason they changed from Silk Road is they believed Hillary Clinton had mentioned it in a speech and they didn’t want it to be associated with her. It’s a bit crazy, but there you go.

But the initiative has potential?

Sure, but it’s a very long-term project. It was launched three or four years ago and hardly anything has been done. A lot of potential is there, lots of countries are involved, lots of memorandums of understanding were signed etc, but in terms of hard and concrete projects, there are very few, and most of them could have been done under any heading.

Well, at least there is a significant increase in container traffic between China and Western Europe by train, although it’s not going to replace the traditional way of the containers by sea, because railway transport is faster than sea, but it’s more expensive…

90% of the transport is by containers and the perishable freight goes by air freight, but rail transport is not likely to increase significantly, given those delays at borders. That’s the main problem, it’s not the physical infrastructure. So when you talk about connectivity, one thing is improving infrastructure, but also very important is the mentality of people occupying customs posts, who traditionally have seen this as the way to augment their income through bribery and corruption.

The EU doesn’t seem to be very enthusiastic about the Silk Road. Is it because some member countries don’t want a change of the status quo, they don’t want traffic to be diverted?

There isn’t much evidence of traffic being diverted. I don’t think the EU is hostile to it, it’s not particularly enthusiastic. It basically says, look, if this brings investment to countries that need it, and there is a desperate need of investment all over Asia, then that’s good, but it must be done under the principles of OECD, World Bank, IMF, on transparency, public procurement, sustainable development, all these things.

But it must be a matter of concern for the EU, seeing China increasing considerably its clout on some EU countries, like the Western Balkans?

Yes and no. It’s good that the countries have alternative sources of investment. The Chinese have put money on building infrastructure in Greece, Montenegro, Macedonia, taking over a plant in Serbia, a new railway between Budapest and Belgrade, that’s good, but as long as it stays within international standards. That’s the key point from the EU. Increasing China’s influence is like increasing economic might regardless of who you are, by investing, you are getting more political influence, that’s quite clear.

What do you think of the establishment of the Astana International Financial Centre (AIFC), in the context of the New Silk Road?

It was in the process of preparing for the opening when I was there last November. It’s difficult to say how it is going to have a big impact or take business away from any other financial centres. The Chinese have foreign exchange controls now that limit the export of foreign currency, including the renminbi [yuan]. Their plans for the internationalisation of the renminbi have been put on hold at the moment. So the Astana Financial Centre, fine, but I think its scope will be very limited.

How about the ideas of several things, not only transport, being boosted via the New Silk Road, like for example producing electricity in Central Asia and supplying Europe?

The energy aspect is, of course, one of the main motivations for China’s Belt and Road initiative, because they are obviously seeking swap deals with companies of energy-rich countries along the road. But this is a very international market, and countries will sell their energy usually to the highest bidder, unless there is a political reason not to do that. Look at how difficult it has been for China and Russia to agree on an energy deal, because fundamentally the two countries are suspicious of each other.

A summit in the 16+1 format was held in Sofia at the weekend. One of the decisions has reportedly been to establish a global centre in Sofia for Chinese economic penetration in the region… 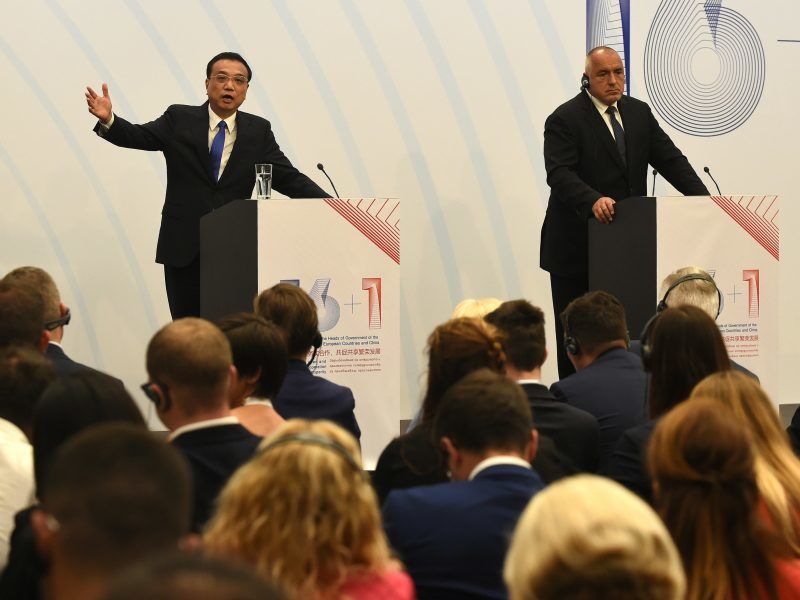 China remains open for trade with foreign partners and can only benefit from an economically strong Europe, its premier said on Saturday (7 July) as he pressed for expanded ties with the continent’s eastern wing while waging a tariff war with Washington.

All of the 16 countries [11 EU members: Bulgaria, Croatia, the Czech Republic, Estonia, Hungary, Latvia, Lithuania, Poland, Romania, Slovakia, Slovenia, and five EU hopefuls: Albania, Bosnia-Herzegovina, Macedonia, Montenegro and Serbia] have been trying to get something special from the Chinese and essentially failed. 16+1 has brought basically nothing to these countries, it has brought some minor political advantage to the Chinese, but the Chinese also see the weaknesses of the 16+1 makeup and are trying to drop it. It was very much at the insistence of the Bulgarians that they went ahead and had this summit at the weekend, because Li Keqiang was going to Germany anyway. For the Chinese, the German market is more important than all the 16 put together.

16+1 is going nowhere. In terms of Belt and Road, it’s different, it will run for a long time because it has been associated with President Xi Jinping and it has been put in the constitution. But the Chinese clearly haven’t done their political risk assessment.