Kazakhstan ambassador: 2021 has been a ‘special year’ in Kazakh-EU relations 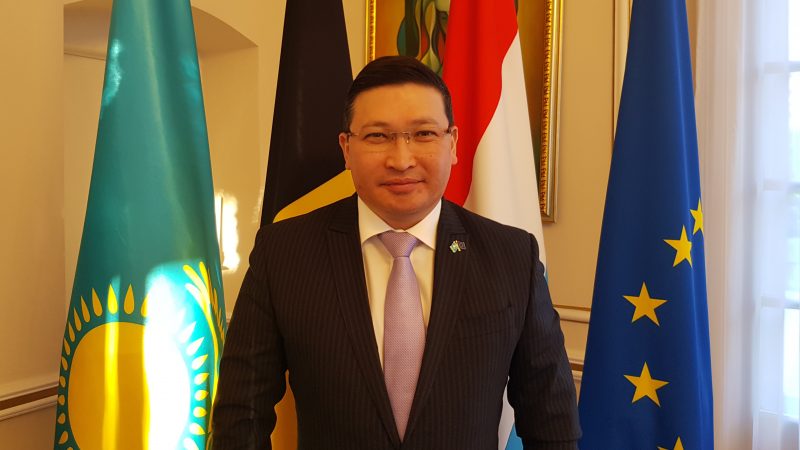 In an exclusive interview, Margulan Baimukhan, Ambassador of Kazakhstan to the EU, discussed tensions between major geopolitical players, Central Asian cooperation, and his country’s traditions in promoting international understanding.

Margulan Baimukhan was appointed Ambassador of Kazakhstan to the EU in 2021. Having started his career at Daewoo Electronics, he has served as Deputy Foreign Minister and  Ambassador to Poland.

We are speaking close to the year’s end, which is a good opportunity to take stock. Would you say the highest point was last month’s the visit of President Kassym-Jomart Tokayev to Brussels?

This year was very active, especially in the second half, which was illustrated by the many high-level visits. Indeed, the high point was the first visit of our President Kassym-Jamart Tokayev to Belgium, his meetings with the EU leaders, Council President Charles Michel and Commission President Ursula von der Leyen, and with the leaders of Belgium, His Majesty King Philippe, and the Prime Minister Alexander De Croo.

So despite the ongoing COVID pandemic, there has been no slowdown in relations?

Although the COVID period has reduced the number of in-person contacts between politicians, parliamentarians, businessmen, scientists, the year 2021 was special. This is the year when we marked the 30th anniversary of our independence, and had many manifestations in various forms to highlight the importance of Kazakhstan-EU relations.

A direct expression of this is the increase of our turnover with the EU by 15% during 2021, despite the pandemic. This means that the dynamic of our relations is strong, which is attested by statistics: despite the pandemic, EU foreign direct investment in Kazakhstan in 2020 made a solid sum of $8 billion, just a little less that in 2019, but we expect better results for 2021. The trade turnover I mentioned reached the volume of €20 billion and counting. For us, the EU will remain the largest economic partner and investor. A couple of figures to illustrate this trend: 27,000 European companies have long-term economic operations with the Kazakh market, and conversely, 3,700 Kazakhs have similar activity with the EU.

For us the implementation of EPCA, the Enhanced Partnership and Cooperation Agreement which entered into force on 1 March 2020 is key. By the way we are speaking on an anniversary date as on 21 December, six years ago, EPCA was signed.

This is a voluminous document covering 29 areas of cooperation. On our side we adopted a roadmap for the EPCA implementation, it’s our internal document, but it is transparent to our European partners and they can see in detail how we implement our agreement.

There is also the high-level political dialogue, on a wide range of issues including regional and global security, there is also the trade and economic cooperation with accent on green economy, digital, and transport. Kazakhstan aims at achieving carbon neutrality by 2060. We have objectives that coincide with the EU Green Deal, or the EU connectivity strategy, and transport is also very important too. Kazakhstan being the largest landlocked country in the world, we aim to develop transit of goods under the highest standards, which includes digitalisation.

The EU policies are not something surprising for us. In 2010 our then President Nursultan Nazarbayev launched our national initiative ‘Green bridge’ as our country’s answer to the climate change challenge. The motto of 2017 Astana Expo in Kazakhstan was ‘Energy Future’ because although we are a country rich in fossil fuels, we already knew what the global challenges are.

The priority is to introduce the best European technologies in Kazakhstan. In addition, we want to encourage contacts between scientists, scholars, students under various programs, such as Erasmus+. We are reaching the end of the Multiannual Financial Framework, which provides for specific funding, and the new MFF 2021-2027 is starting. It doesn’t mean that Kazakhstan wants this EU money, we have our own funds, but we are really interested in common projects in the areas I already mentioned.

Can you also touch upon the regional aspect, as far as Central Asia is concerned?

I am sure it has become obvious that the five Central Asian countries [Kazakhstan, Uzbekistan, Tajikistan, Kyrgyzstan and Turkmenistan] are cooperating well. They have formulated common goals, common objectives. The EU is financing joint projects to the tune of €1 billion and Kazakhstan’s ambition is to play an active role in them.

Being the largest economic player, I think my country produces 60% of the region’s GDP, we can be a gate for the EU in these projects. A few days ago, the EU presented its Global Gateway initiative. We are looking into it and looking forward to play our part. We also propose our own projects with the other countries of Central Asia and we are very grateful for the attention by the EU Representative for Central Asia Terhi Hakala as well as to her predecessor Peter Burian, who are deeply engaged in the process. You also realise that the situation in Afghanistan is worrying and Kazakhstan and its Central Asian partners want to play a positive role in the international community’s response to this challenge.

What does the wisdom of Kazakhstan’s diplomacy, which has maintained good relations with geopolitical players, some of which are also your direct neighbours, suggest? I am asking this question, because the tensions between the big geopolitical players is increasing…

Indeed, Kazakhstan is a neighbour with Russia and with China. Ever since our country gained its independence in 1991, our leadership’s first step was the delimitation of borders. This has greatly helped.

Secondly, we have pursued a so-called multi-vector foreign policy. It was easier in the earlier stages because lately the relations between the US, China, and Russia have become more tense. But we maintain our multi-vector policy and have no plans to change it. There is a concept of “strategic partnership”, and we have such with the Russian Federation, we have such with the People’s Republic of China, and we have a strategic partnership with the EU and its member states.

Our initiatives have always been of good faith, of peace, an example is the Astana Process [concerning Syria], of promoting nuclear disarmament and non-proliferation, and the entire area of Central Asia is a nuclear-weapons-free zone. We will continue our work in this direction.

We held the chairmanship of OSCE in 2010, we were a non-permanent member of the UN Security Council [in 2017-2018], Kazakhstan has been elected a member of the United Nations Human Rights Council [for 2022-2024], there are various platforms where Kazakhstan is promoting its multi-vector policy. The bottom line is not only to consolidate our independence, but to make it stronger. This strengthening is based on communication, dialogue, good-neighbourly relations, and non-interference in the internal affairs, not forgetting our role on the geopolitical map.

I have attended two rounds of the Astana Process as a journalist,  and I would describe Kazakh diplomacy as discrete and modest, being useful at the same time. Is this a correct description?

We are partisans of good faith and pragmatism. Any diplomatic activity requires a certain level of confidence. When we offer a platform, such as for the Astana Process on Syria, this suggests that our partners have the necessary confidence that they can discuss complex issues in our capital. Diplomacy is not static, it evolves, and we learn from our experience. Some call our diplomacy “the diplomacy of steppes”, others call it “the Nomad diplomacy”. It was not easy to preserve a huge territory like ours. Our ancestors have been in favour of constructivism, the same is very important for us: peace, understanding, constructivism.

It’s common understanding that foreign policy succeeds only when internal policy is successful. The reforms we are conducting in Kazakhstan, under the concept of “listening state”, are taking flesh step by step. We cannot change everything overnight, or as fast as some of our European partners would imagine, but by building confidence internally we will also be stronger on the global scene.