Kazakhstan will stop using coal from 2050 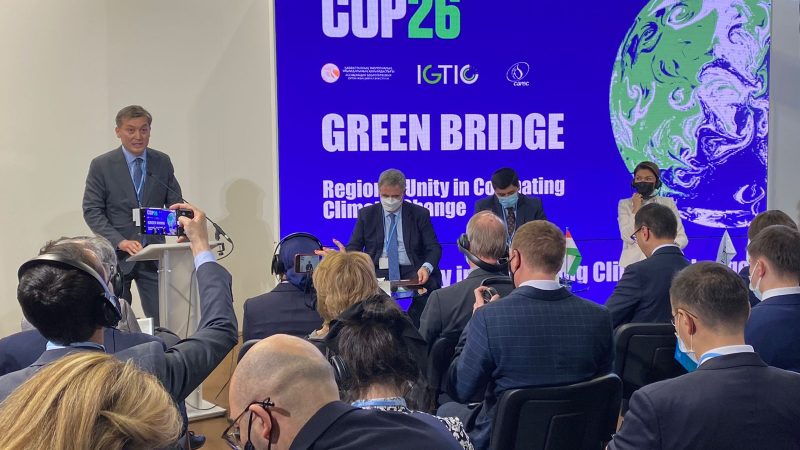 Serikkali Brekeshev, vice minister of ecology, geology and natural resources of the Republic of Kazakhstan, speaks at COP26 in Glasgow. [Handout photo]

Kazakhstan aims to achieve carbon neutrality by 2060, which means expanding the share of renewables to 83% and halting heat generation from coal after 2050, Serikkali Brekeshev told EURACTIV in an interview.

Serikkali Brekeshev is minister of ecology, geology and natural resources of the Republic of Kazakhstan.

As COP26 in Glasgow is ongoing, I would like to ask you about the goals and features of “green” policy in the Republic of Kazakhstan.

In 2020, our Head of State announced the plans for carbon neutrality of the Republic of Kazakhstan by 2060. To implement this goal, a long-term Doctrine is being developed, which describes the vision for the development of the low-carbon economy of Kazakhstan by 2060 and determines the paths for the energy transition, attracting investment and phasing out coal.

As part of a long-term goal, from 2040, we plan to actively use low-carbon technologies, such as carbon capture and storage to expand the share of renewable energy sources to 83% by 2060 and stop generating heat from coal generation after 2050. Also, in the agriculture and land-use sector, we plan to move to 100% sustainable agriculture and produce completely organic products.

As part of our medium and short term goals, we are working to improve the carbon market, particularly the emissions trading system and the introduction of a carbon tax. By 2030, we plan to increase the share of renewable energy sources to 24% instead of the previously planned 10% and reduce the share of coal generation from the current 69% to 40% by 2030. By 2025, 2 billion trees will be planted, which will absorb more than 20 million tons of CO2 emissions by 2030. These measures will allow to gradually achieve the goals of the Paris Agreement and make Kazakhstan’s contribution to the global fight against climate change.

How can you describe the synergies between Kazakhstan and the EU in terms of environmental protection policies?

We work closely with EU countries in the field of environmental protection, in particular on the regulation of greenhouse gas emissions and the convergence of the two emission trading systems. Kazakhstan cooperates with the EU in the framework of two projects of the European Commission – TAIEX and Twining. The projects provide technical and expert support to Kazakhstan to harmonize the two systems, establish an equal carbon price, and improve the quality of the verification institution.

What is the opinion in Kazakhstan regarding the EU’s Green Deal?

The EU Green Deal package includes introducing a border carbon tax on imported products of steel, iron, aluminium, fertilizers and electricity. The main objective of this mechanism is to reduce greenhouse gas emissions in the most carbon-intensive sectors of the economy. In this regard, Kazakhstan will introduce a systematic policy to reduce emissions at the level of the European Union and regulate carbon prices.

A three-year transition period is envisaged as part of the introduction of the border carbon tax, which aims to collect reporting data on greenhouse gas emissions from exporters. We are currently working to improve the transparency and quality of validation and verification, inventory and reporting of emissions within the framework of the developed Rules of the new Environmental Code and international cooperation with IRENA, the European Bank for Reconstruction and Development and other institutions.

What is Kazakhstan expecting from the COP-26 meeting in Glasgow?

At COP-26, the Prime Minister of the Republic of Kazakhstan, Aksar Mamin, took part. The goal of achieving carbon neutrality by Kazakhstan was confirmed, a reduction in coal generation by 30% by 2030 and the creation of a Regional Climate Hub were announced.

We are planning to host national and regional events at the Central Asia Pavilion. This will make it possible to more effectively participate in global climate negotiations and show the world community the readiness of the Central Asian countries to contribute and voice the necessary needs and further development plans.

We also plan to deliver a regional statement on behalf of the Central Asian countries. The Regional Statement will reflect our commitment to achieving the goal of the Paris Agreement, addressing vulnerability to climate change and the need for cooperation to adapt to it.