Kazakhstan is investing in human capital and plans to become one of the world’s 30 most advanced nations by 2050. At a recent conference in the capital Nur-Sultan, leaders and economists offered advice, valid also for other countries as well: to focus on education.

The ‘Astana Economic Forum ” (AEF), now in its 12th edition,  is sometimes called ‘the Davos of Central Asia’. On 16 May, the first President of Kazakhstan, Nursultan Nazarbayev provided explanations for his recent decision to step down and give a chance to a younger generation to pursue the ambitious goals. 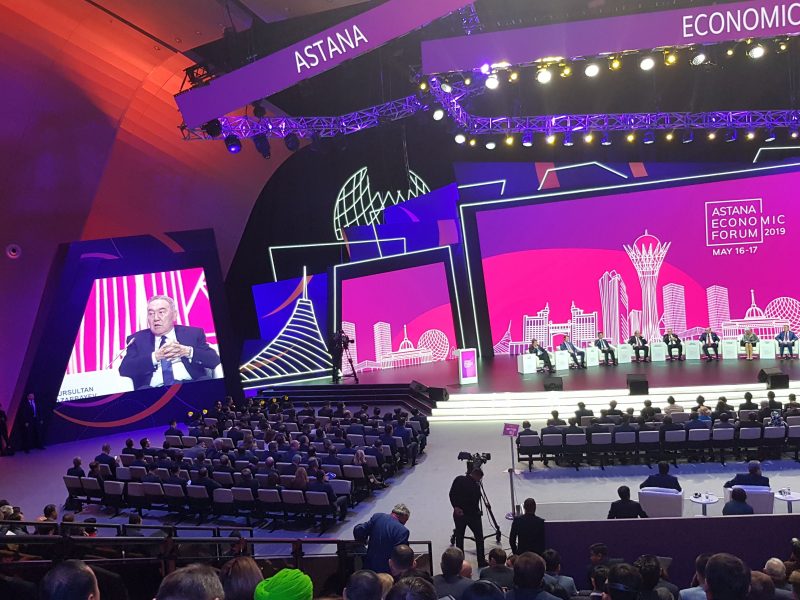 The first President of Kazakhstan, Nursultan Nazarbayev, was the main speaker and the centre of attention at the 12th edition of the Astana Economic Forum on Thursday (16 May). To a wide international audience, he provided explanations for his recent …

This year’s AEF was unprecedented. In two days (16-17 May), more than 50 sessions and events took place – record numbers in its 12-year history. For the first time, students and youth had the opportunity to take part in AEF.

Nazarbayev announced that digital transformation is changing the face of the country’s economy, and mobile creative human capital is becoming the main driver of growth. “By 2030, about 375 million people around the world will need to undergo training and change their profession,” said the first president of Kazakhstan.

The Managing Director of the International Monetary Fund, Christine Lagarde, was the only female speaker at the opening panel. She made the audience laugh and applaud when the moderator told her to use a rostrum situated at the right side of the scene, while all previous speakers had used the left one.

“Thank you very much Mr Moderator, and I hope that this particular podium is not exclusively reserved for women, because it will not be very well used today,” she said.

Further on in her speech, Lagarde returned to the role of women in society, commending Kazakhstan for being a leader in the region.

“I’m pleased to say that through the hard work of the government and private companies, female labour force participation in Kazakhstan is now at 65% which is the highest in the region and a benchmark for every country in Central Asia,” she said.

Lagarde said the IMF had published on the occasion of this forum the report “Promoting inclusive growth in the Caucasus and Central Asia”, which she said would be “formidable reading” for those interested in this prospect.

In addition to the policy of increasing the role of women, the IMF chief focused on three more areas.

She insisted that fiscal policy should balance debt concerns with critical initiatives in health, education and infrastructure, all three conducive to increase productivity. Here, she said the IMF would continue its support to the region through technical assistance and capacity development programmes with the proposal to actually set up a training centre in this region.

Lagarde said the IMF believes that corruption needs to be addressed head-on in the region, her words triggering another round of applause.

IMF chief Lagarde: Corruption in the region of Caucasus and Central Asia "must be addressed heads-on". Gets applause. Smiles. Says "I agree with you". More applause pic.twitter.com/pivyRkFzWv

Further, Lagarde said that more efforts were needed so that the financial sector would be sound and its services widely accessible. She said that only 45% of adults in the Caucasus and Central Asia countries had a banking account, which is almost 20% lower than the average in other emerging markets.

“If Central Asia can harness the power of Fintech as emerging economies in other regions have done, the potential gains for women, for young people and for the poor are significant”, the IMF chief stressed.

It was a pleasure to meet President #KassymJomartTokayev. #Kazakhstan is an important IMF partner in the #CentralAsia region, we discussed the need to move ahead with reforms including adopting more inclusive growth policies. pic.twitter.com/ftB9LsGxP0

The President of Armenia, Armen Sarkissian, a computer scientist by background, focused on education in his speech. Speaking about the acceleration of events, he gave as an example the capital of Kazakhstan, now called Nur-Sultan, which was built very fast in the steppes, at what is the heart of Eurasia.

He built on the notion of a “globally integrated world”, which in his words hasn’t started now, but at the historic period of the Silk Road, and on preparing today’s children for the 21st century, as the locomotive of progress in his words would be the human being, “the creative man”.

“There is going to be another revolution. It will not be the Fourth Industrial Revolution to be followed by a fifth one, but we’re entering a phase of rapid revolutionary evolution”, in which “the world will be changing every day”, he said. The challenge, he said, was to prepare for that.

The Prime Minister of Georgia, Mamuka Bakhtadze gave as an example the experience of his country ‘s comprehensive education reform. He said that this had been “the bravest step” since Georgia gained independence.

Heard some very interesting and visionary speeches at the opening panel of @Forum_Astana. Touched on topics such as #HumanCapital devt., #Connectivity, #Trade, #Investments & #Innovations. Discussed our on-going #EducationReform & reflected on our recent successes. 🇬🇪🇰🇿

“This new education reform is, I would say, revolutionary, a real game-changing undertaking for our people and for our future generations,” he said.

“We have to understand that in our competitive world only the ones who have open, prolific minds, information and the ability to think out of the box, will be the ones to create the added value for our economies,” he said.

Herman Gref, CEO of Sberbank, a Russian bank which is the second on the Kazakh market, also focused on education and human capital. He said education wasn’t able to provide competent personnel, especially soft and digital skills. He quoted research according to which almost 90% of pupils and students don’t like their textbooks, and a vast majority of teachers don’t like their job.

This is why his bank was providing training to its employees, and life-long learning was not an empty word. 36,000 IT specialist work with Sberbank, and every day the company is recruiting 5,000 people, he said.

Risto Siilasmma, CEO of Nokia, agreed and said that along those same lines, Nokia, decided to train not just their engineers or management in machine learning but every single one of their 100,000 employees: “every single receptionist, janitor, secretary up to the CEO. And there is a level of urgency in all of this”.

Joined a round table discussion with President Tokayev in the Kazakhstan White House.

There is a lot of positive energy in Kazakhstan! pic.twitter.com/yI58MlaLOG