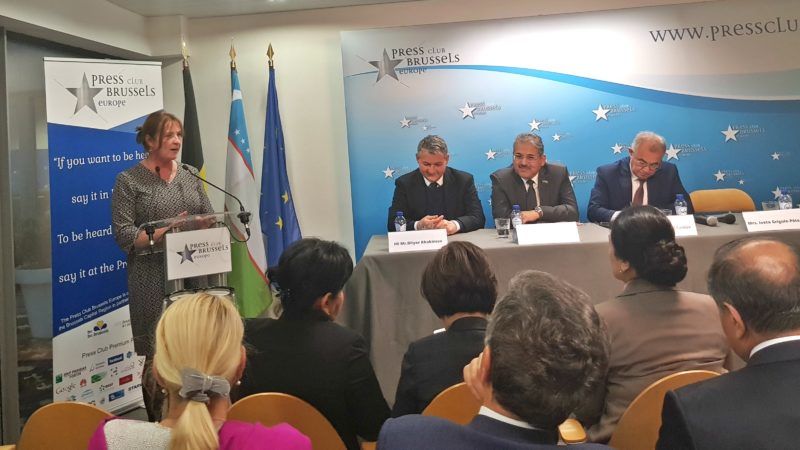 A leading MEP said on Tuesday (28 November) that regional cooperation in Central Asia was benefitting from “a new beginning” thanks to the democratisation in Uzbekistan flowing the death of its first leader Islam Karimov in 2016.

After Karimov’s death, his successor Shavkat Mirziyoyev has been pursuing a less autocratic path, seeking to reform and liberalise the country. Difficult regional relations are improving as a result.

Addressing a public event dedicated to the 25th anniversary of the Constitution of Uzbekistan, MEP Iveta Grigule Pēterse (ALDE, Latvia) made many compliments about the way the new leadership was reforming the country and improving regional relations.

She said she had attended the International Conference on Security and Development in Samarkand on 10-11 November, and that she was in contact with Peter Burian, the EU Special Representative for Central Asia, both agreeing that the Samarkand event was “very special, high-level, very constructive, very dynamic and with great results”.

Uzbekistan has shown that the country has the capacity and skills to organise such high-level events and Grigule Pēterse said she expected there would be more such forums.

As a Latvian, she said she had lived in the same “empire” with Uzbekistan, and that she realised how much the country had recently changed.

“This last year everyone in the European Parliament, in my delegation, in the Commission, speaks about the Central Asia Spring, because it’s actually incredible what Uzbekistan did in this one year”, the MEP said.

She also gave as an example the spectacular way in which Uzbekistan stopped the forced convertibility of currencies, which has been a huge problem for EU companies.

Reportedly, until recently foreign businessmen in Uzbekistan were obliged to sell all their foreign currency revenues at central bank rates — which are markedly lower than those on the black market.

Grigule Pēterse said that on previous visits to Uzbekistan she used to ask the taxi driver to take her to the market where she exchanged her euros at twice the price offered by banks.

But during her last visit, she was pleasantly surprised when the taxi driver told her that there were no more black market rates and that she should change her euros in a bank.

Alisher Kurmanov, Chairman of the Senate Committee on International Relations, spoke of the changed media landscape in Uzbekistan in the recent months.

“If you ask me what’s the most eye-popping change that took place in Uzbekistan in the last year, I would say it’s the awakening of media. It’s a very interesting process and today the irony is that our mass media are probably much harsher than the international outlets that have been criticising us over the last 20 years, they are just lagging behind our own guys”, he said.

Alberto Turkstra from the European Institute for Asian Studies also spoke highly of the growing geopolitical importance of the region during the last year.

“Under Mirziyoyev, Central Asia has become the core priority of Uzbekistan’s foreign policy, laying the foundations for successful regional cooperation to take advantage of all the unrealised potential that the region has”, he said.

He added that high-level bilateral contacts between the countries’ leaders had led to greater political trust, and regional trade had grown up, up to 70% year-on-year between certain countries. Among many other things, he mentioned the resumption of direct flights between the region’s capitals and the simplification of visa restrictions.

Turkstra said that with the Samarkand conference, the EU was beginning to give the region the attention it deserves, also with the publication of the EU-Central Asia strategy earlier this year.

Uzbekistan’s renewed engagement with the EBRD and the EIB is opening new possibilities for the country to bridge the infrastructure gaps. One of the recent announcements was an approval of a $5 billion loan package to the Central Asia regional economic cooperation programme, which would also be used for railway developments, he said.

Turkstra quoted the World Bank which said that the integration of the Eurasian continent could become one of the main defining features of the 21st century, with Central Asia as its central pillar.