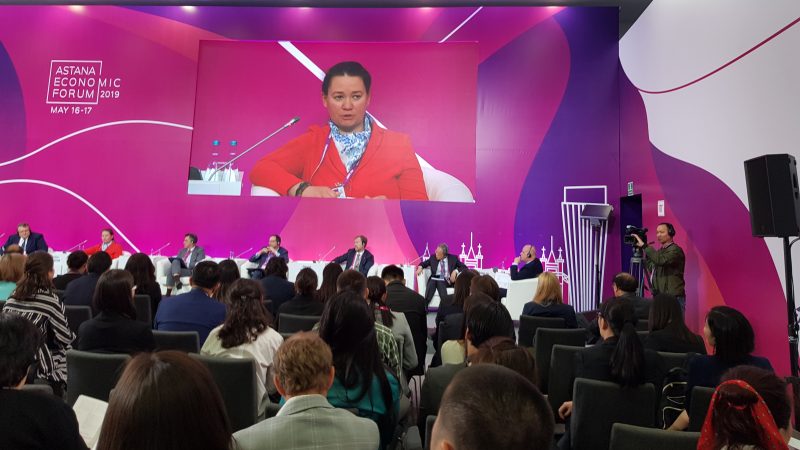 Ekaterina Mayorova on the screen. Luc Devigne is the fourth panelist from the right. [Georgi Gotev]

At the Astana Economic Forum, a representative of the EU hinted that the host country, Kazakhstan, could play a role in helping to bridge differences over the reform of the World Trade Organisation.

US President Donald Trump’s administration says the WTO is dysfunctional because it has failed to hold China to account for not opening up its economy as envisaged when Beijing joined the body in 2001.

To force reform at the WTO, Trump’s team has blocked new appointments to its trade court, which is now rapidly running out of judges, meaning it will be unable to issue binding rulings in trade disputes. Trump has even threatened to withdraw the United States from the Geneva-based WTO.

The European Union has published proposals for reform in different areas of the WTO that it has agreed with China, India and other countries, hoping to overcome U.S. objections that have thrown the WTO into crisis. The US is, however, unmoved by the EU’s efforts.

Speaking in Astana on 16 May, Luc Devigne, deputy managing director Europe and Central Asia in the European External Action Service (EEAS), made clear that the issues were serious, as in his words, there is “no Plan B”.

“From an EU perspective, in 20 years international trade has changed more than the WTO itself. But there is no need to throw away the system because there is no plan B. There is no alternative to the WTO, there is nothing similar in terms of effectiveness and we should be really cautious here”, he said.

He further said the EU was “extremely worried” by the aggravated tensions “and a shift by certain members, or a certain member”, to go to unilateral measures. “Only concerted measures can prevent the system from collapse,” said Devigne.

“We are engaged in WTO reform, we want success, there is no alternative, there is no second trading system”, Devigne repeated. “Kazakhstan will have a great responsibility in this regard. Building bridges is important, President Nazarbayev reminded us of the big ambitions of the country in this regard, and we support them”, he said.

Indeed, the first President of Kazakhstan, Nursultan Nazarbayev, has offered his country’s capital as a platform where the US, China and Russia could solve their disputes.

Moreover, WTO members have agreed that the organisation’s next ministerial conference will take place from 8 to 11 June 2020 in Astana. The dates were endorsed at an 18 October meeting of the WTO’s General Council. This may be interpreted as a major success for Kazakhstan, a country that gained its independence in the early 1990s and became the 162nd member of WTO on 30 November 2015.

Mark Linscott, a Senior Fellow at Atlantic Council, who has spent most of his career as a US trade representative, with the last two years in Central Asia, offered insight into Washington’s position.

“At this point in time, I think the Trump Administrations has definitely urged some soul searching at the WTO,” he said.

Linscott recalled that the organisation had undergone other crises in the past. He also argued that the core rules of the system put in place by 1995 remain sound. However, in his words, these rules had not been substantially extended and updated since then, with a few exceptions.

“By assessing what might work and what might not, I think it should be reassuring to note that the multilateral trading system has faced crises in the past. And it has proven flexible enough to respond when driven by forces of creativity”, the former US trade official said.

Ekaterina Mayorova, director of the department for trade negotiations of the Russian ministry of economy, said her country had joined the World Trade Organisation with the hope that it could participate in the elaboration of new rules. Russia joined WTO in 2011 after a record-long accession process.

“We regret that reality doesn’t really correspond to our expectations,” she said.

“Instead of stability of our access to international markets, we were faced with more protectionism,” Mayorova said, adding that, furthermore, Russia itself was faced with sanctions and that a “key partner” used measures from the time of the Cold War.

“We paid an entry ticket, but what did we get in exchange?” she asked.