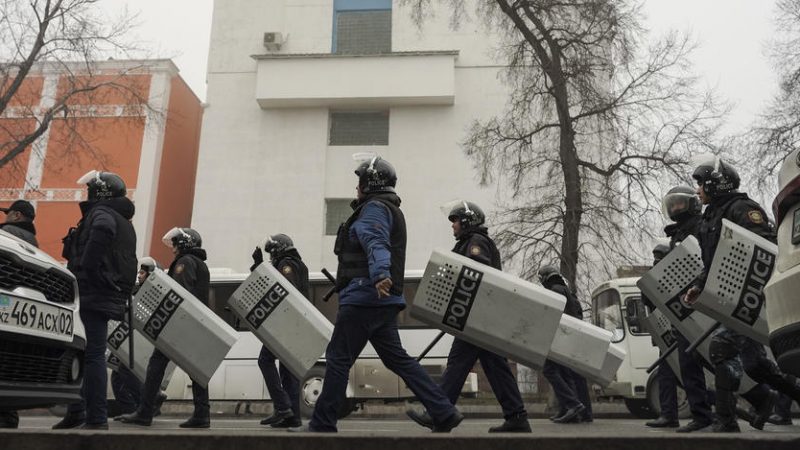 Riot police officers patrol in a street during rally over a hike in energy prices in Almaty, Kazakhstan, 5 January 2022. Protesters stormed the mayor's office in Almaty, as Kazakh President Kassym-Jomart Tokayev declared a state of emergency in the capital until 19 January 2022. [Stringer/EPA/EFE]

Authorities in Kazakhstan declared a nationwide state of emergency and promised a tough crackdown on Wednesday (5 January) as mass unrest plunged the country into chaos.

Kazakh President Kassym-Jomart Tokayev accepted the government’s resignation on Wednesday, his office said, after a fuel price increase in the oil-rich Central Asian country triggered protests in which nearly 100 police were injured.

Tokayev also stripped his powerful predecessor Nursultan Nazarbayev of a role as head of the country’s security council after demonstrators stormed and torched public buildings in the republic’s worst unrest for more than a decade. 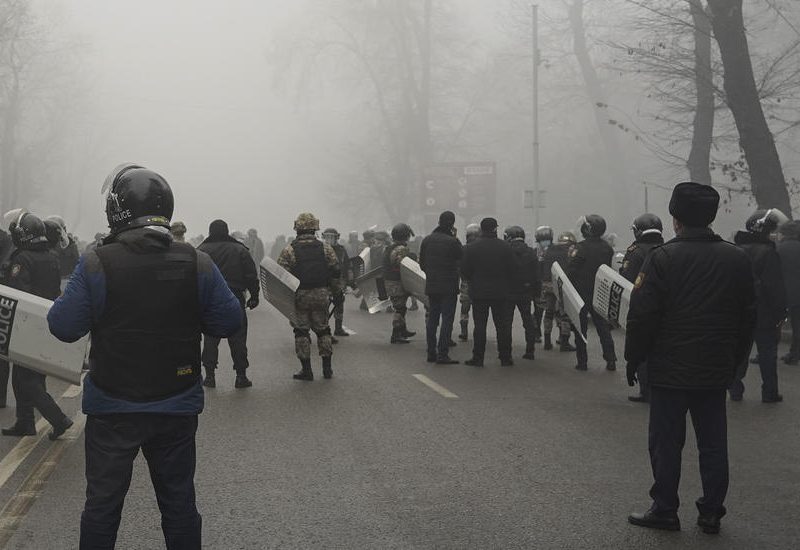 Kazakhstan’s president stripped his powerful predecessor Nursultan Nazarbayev of a role as head of the country’s security council on Wednesday (5 December) after demonstrators stormed and torched public buildings in the republic’s worst unrest for more than a decade.

In a statement, the EU External Action Service (EEAS) said it was following closely the ongoing protests in Kazakhstan “linked primarily to the recent doubling in price of liquefied petroleum gas”, and encouraged “a peaceful resolution of the situation through inclusive dialogue with all stakeholders and respect for the fundamental rights of citizens”.

“We call on all concerned to act with responsibility and restraint and to refrain from actions that could lead to further escalation of violence. While recognising the right to peaceful demonstration, the European Union expects that they remain non-violent and avoid any incitement to violence. The European Union also calls upon authorities to respect the fundamental right to peaceful protest and proportionality in the use of force when defending its legitimate security interests, and to uphold its international commitments”, the statement reads.

The EEAS reminds that Kazakhstan is an important partner for the European Union. “In the framework of the European Union-Kazakhstan Enhanced Partnership and Cooperation Agreement, we count on Kazakhstan to uphold its commitments, including freedom of the press and access to information online and offline.

The chairman in office of the Organization for Security and Co-operation in Europe (OSCE), Polish lawyer Zbigniew Rau, sated that “violence is never an appropriate response for resolving tensions”.

“This is why I call for a peaceful return to order and respect for democratic processes, while rights and freedoms, including freedom of assembly and freedom of expression, must be protected”, Rau stated, calling for “de-escalation of the situation and engaging in dialogue by all sides”.

The Kazkh authorities also appealed for calm but also shut down the internet and warned that lawlessness would not be tolerated.

Tokayev accused the protesters of “massive attacks on law enforcement” that left several dead and wounded.

“I intend to act as tough as possible… Together we will overcome this black period in the history of Kazakhstan,” he said.

Police fired stun grenades and tear gas at the crowd, some armed with batons and shields seized from police, but were unable to prevent them from entering the building, an AFP correspondent at the scene said.

Local media said protesters then set their sights on the presidential residence in Almaty. Both it and the mayor’s office were reported to be in flames.

There were reports of widespread unrest throughout the country and unconfirmed claims that protesters had seized control of the airport in Almaty.

Several flights from Moscow to cities in Kazakhstan were cancelled or postponed on Wednesday night.

But the full picture was unclear after major disruptions to communications, including a nationwide shutdown of the internet, the blocking of online messengers and cuts to mobile phone services.