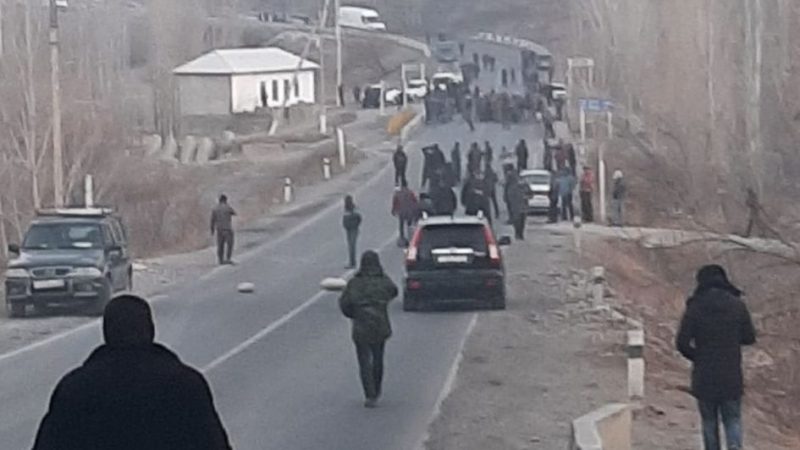 Kyrgyz authorities said Tajik citizens had blocked a road between the provincial centre Batken and the Kyrgyz village of Isfana. Border guards on both sides managed to get the road unblocked, but then fighting broke out. [Photo: Social media]

Kyrgyz and Tajik border guards exchanged fire on Thursday (27 January) amid a standoff over a blocked road, in the latest clash between the former Soviet neighbours following a similar violent incident last year that killed dozens.

The border between the two countries, both of which host Russian military bases and are closely allied with Moscow, is poorly demarcated.

It said Zas has held phone talks with senior security officials from Kyrgyzstan and Tajikistan.

“The armed confrontation at the Tajik-Kyrgyz border should be immediately stopped,” he was quoted as saying by the news agency.

He also said that the CSTO, of which both countries are members, stood ready to help resolve the conflict.

Kyrgyz authorities said Tajik citizens had blocked a road between the provincial centre Batken and the Kyrgyz village of Isfana. Border guards on both sides managed to get the road unblocked, but then fighting broke out.

Border troops from Kyrgyzstan and Tajikistan engaged in a prolonged gun battle in a clash alleged to have been triggered by Tajik troops blocking a strategic Kyrgyz highway https://t.co/7nG6IzBYcN

The Kyrgyz authorities said later in a separate statement that the two sides agreed a ceasefire around midnight but fighting resumed 10 minutes later.

Tajikistan’s border guard service said its servicemen defended Tajik civilians and it was the Kyrgyz side that opened fire first.

The Batken provincial government in Kyrgyzstan said four servicemen have been wounded, according to local news website 24.kg. Tajikistan said there were casualties among its civilians and border guards, but provided no figures. A Tajik security source said one person has been killed and eleven wounded.

At least 49 people were killed in fighting between the two predominantly Muslim nations last April which escalated from a similar border clash.