Convened by Kazakhstan in its capacity as the president of the United Nations Security Council (UNSC) for the month of January, the ministerial-level debate was chaired by the country’s Foreign Minister Kairat Abdrakhmanov.

A flagship event was held on 18 January with the participation of the Kazakhstan President Nursultan Nazarbayev. 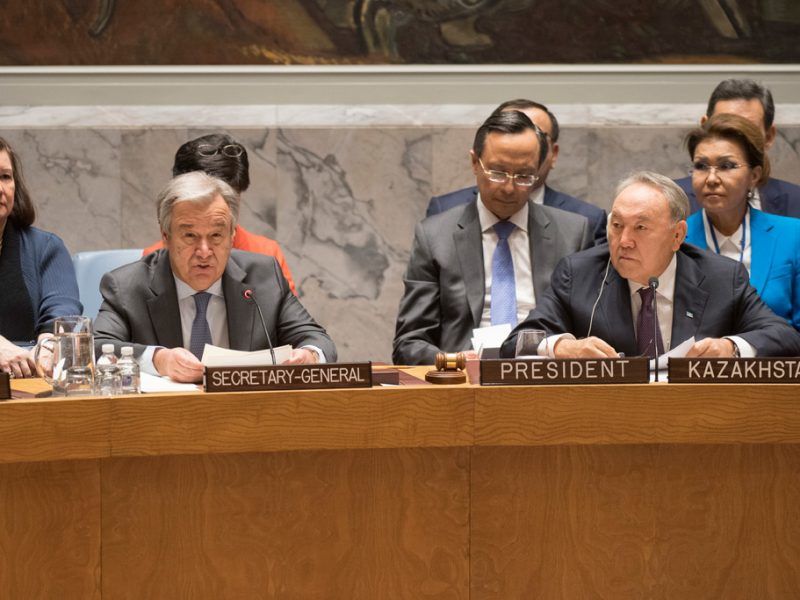 One of the major highlights of Kazakhstan President Nursultan Nazarayev’s visit to the US was an exchange of remarks with Donald Trump that suggested the Minsk talks on Ukraine may be moved to the Kazakh capital, Astana.

Despite an increase in activities of well-known terrorist groups in Afghanistan, Kazakhstan states that all Central Asia countries believe Afghanistan should not be viewed as a threat. Instead, Kazakhstan, on behalf of its neighbours, considers it crucial to integrate the economy of Afghanistan with its regional group, by implementing regional infrastructure, trade, investment, transit and transportation projects.

Kazakhstan tabled a 3-page “Concept note” for addressing the challenges posed by the fragile and volatile situation in Afghanistan, by building a partnership between this country and Central Asia as “a model for the security-development nexus”. Central Asia comprises Kazakhstan and its neighbours Uzbekistan, Turkmenistan, Kyrgyzstan and Tajikistan.

Guterres spoke highly of the regional initiatives of the countries of Central Asia and Afghanistan, including in the field of water management, energy, infrastructure and education, noting the willingness of the United Nations to encourage such cooperation.

In particular, the UN Secretary-General singled out the initiative of Nazarbayev, implemented in Kazakhstan, for providing free training in the educational institutions of Kazakhstan to 1,000 young Afghans. He also commended the joint efforts of the countries of the region in combatting cross-border crime, human and drug trafficking, as well as countering terrorism.

Russian Foreign Minister Sergei Lavrov welcomed Kazakhstan’s “responsible and consistent approach” to promote the interests of the Central Asian region on the Security Council platform. At the same time, he underscored the international community’s concern about the unprecedented increase in drug production in Afghanistan and called for urgent measures to curb this threat. He said the situation in this country required a comprehensive approach by regional states and the international community.

US First Deputy Secretary of State John Sullivan stressed that the international community should help start negotiations between the Afghan government and the Taliban, who have so far ignored calls for such talks. In his opinion, it is necessary to work together to deprive the Taliban of resources and convince them that the only place where they can achieve their goals is the negotiating table.

The heads of delegations of Kyrgyzstan, Uzbekistan, Tajikistan and Turkmenistan, who spoke in the Security Council, confirmed the importance of economic assistance to Afghanistan while simultaneously addressing security issues in order to achieve long-term peace and stability in that country.  Hekanat Khalil Karzai, Afghanistan’s deputy minister for foreign affairs, also took the floor.