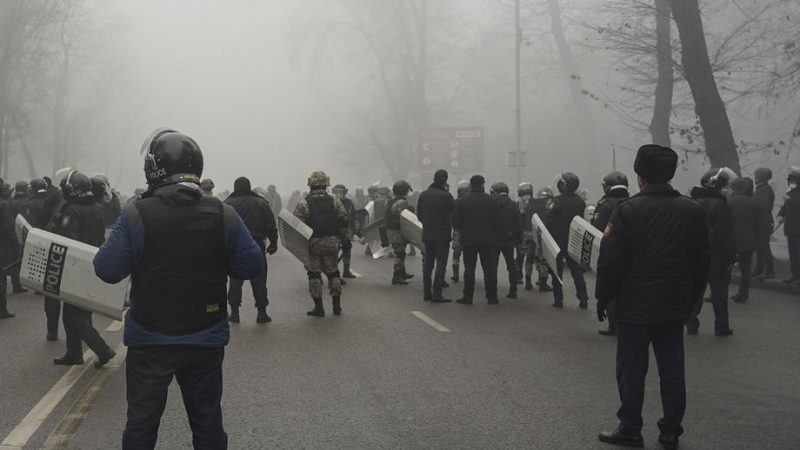 Riot police officers patrol in a street during rally over a hike in energy prices in Almaty, Kazakhstan, 5 January 2022. Protesters stormed the mayor's office in Almaty, as Kazakh President Kassym-Jomart Tokayev declared a state of emergency in the capital until 19 January 2022. [Stringer/EPA/EFE]

Kazakhstan’s president stripped his powerful predecessor Nursultan Nazarbayev of a role as head of the country’s security council on Wednesday (5 December) after demonstrators stormed and torched public buildings in the republic’s worst unrest for more than a decade.

The cabinet resigned, but that failed to quell the demonstrators’ anger after days of unrest triggered by a fuel price rise in the oil-producing Central Asian country.

Kazakh President Kassym-Jomart Tokayev accepted the government’s resignation on Wednesday (5 January), his office said, after a fuel price increase in the oil-rich Central Asian country triggered protests in which nearly 100 police were injured.

Some protesters chanted slogans against Nazarbayev, 81, who has retained wide authority since stepping down in 2019 as the longest-serving ruler of an ex-Soviet state.

Nazarbayev’s hand-chosen successor, President Kassym-Jomart Tokayev, said he had taken over as head of the powerful Security Council, a post that had been retained by Nazarbayev.

The former president has still been widely seen as the main political force in Nur-Sultan, the purpose-built capital which bears his name. His family is believed to control much of the economy.

In a televised address, Tokayev did not mention Nazarbayev by name. The former president has not been seen or heard from in public since the start of the protests.

With the internet shut down across Kazakhstan after the unrest, it was not possible to determine whether removing Nazarbayev from the Security Council post would satisfy the protesters. Tokayev also removed Nazarbayev’s nephew from a post as number two at the State Security Committee, the successor to the Soviet-era KGB.

An Instagram live stream by a Kazakh blogger showed a fire blazing in the office of the mayor of the main city, Almaty, with apparent gunshots audible nearby. Videos posted online also showed the nearby prosecutor’s office burning.

BREAKING 🚨 The prosecutor’s office in Almaty, the largest city of Kazakhstan is on fire in the wake of protests that broke out due to rising fuel prices in the oil-rich countrypic.twitter.com/Sru1JqlpmC

Earlier on Wednesday, Reuters journalists saw thousands of protesters pressing towards Almaty city centre, some of them on a large truck. Security forces, ranked in helmets and riot shields, fired tear gas and flash-bang grenades.

The city’s police chief said Almaty was under attack by “extremists and radicals”, who had beaten up 500 civilians and ransacked hundreds of businesses.

States of emergency were declared in Nur-Sultan, Almaty, and westerly Mangistau province where protests first broke out.

Reuters journalists reported the internet had been shut down as the unrest spread. Netblocks, a site that monitors global internet connectivity, said Kazakhstan was “in the midst of a nation-scale internet blackout”.

Though the unrest was triggered by a fuel price rise, there were signs of broader political demands.

Footage showed police and security officials in civilian clothes breaking up a small group of protesters in the city of Shymkent, hauling away men and pushing them into a police car and a white van as some chanted “Nazarbayev, go away!”

In the city of Aqtobe, what appeared to be several hundred protesters gathered on a square shouting: “Old Man, go away!”. A video posted online showed police using water cannon and stun grenades against protesters near the mayor’s office there.

After accepting the Cabinet’s resignation, Tokayev ordered acting ministers to reverse the fuel price rise, which doubled the cost of liquefied petroleum gas from the start of the year. The gas is widely used to power vehicles in Kazakhstan because official prices made it much cheaper than gasoline.

Kazakhstan’s reputation for political stability under Nazarbayev has helped it attract hundreds of billions of dollars of foreign investment in its oil and metals industries.

The unrest saw the price of Kazakhstan’s dollar bonds plunge by nearly 6 cents, the worst showing since the height of the market collapse of 2020 after the start of the COVID-19 pandemic.  Kazakhstan has been grappling with rising price pressures. Inflation was closing in on 9% year-on-year late last year – its highest level in more than five years – forcing the central bank to raise interest rates to 9.75%

Political analysts said the veneer of stability has masked anger among a younger generation denied the liberalisation seen in other former Soviet states.

“I think there is an underlying undercurrent of frustrations in Kazakhstan over the lack of democracy,” said Tim Ash, emerging market strategist at BlueBay Asset Management.

“Young, internet savvy Kazakhs, especially in Almaty, likely want similar freedoms as Ukrainians, Georgians, Moldovans, Kyrgyz and Armenians, who have also vented their frustrations over the years with authoritarian regimes.”

Kazakhstan is a close ally of Russia. The Kremlin said it expected the country to quickly resolve its internal problems, warning other countries against interfering.

Marie Dumoulin, Director of the Wider Europe programme in the European Council on Foreign Relations (ECFR), took a more cautious view. She told EURACTIV in written comments that despite some Russian media outlets already portraying the protests as a “colour revolution” manufactured by the West, Western countries should be careful not to fall into the trap of a geopolitical reading of these events and pay more attention to local dynamics, which are key to understanding what is going on.

Dumoulin says that by dismissing the government, Tokayev is trying to take back control of the situation, and to blame the outgoing government for the ill-advised decisions that triggered the protests.

In her view, the slogan ‘Old man, go away!’ is mainly targeting Nazarbayev, while Tokayev continues to be seen as a transitional figure, lacking his own political capital. By taking over the leadership in the Security Council, Tokayev will also have to impose himself as the new leader of the country.

Kazakhstan: Statue of former President Nazarbayev reportedly being pulled down in the capital of the Almaty region, Taldykorganpic.twitter.com/hGTzSmXDh2

Dumoulin considers that the new interim head of government, Alikhan Smayilov, as well as the new State Secretary, Erlan Karin, are representative of a new generation of well-educated technocrats, with little connection to the Soviet past. In her opinion, their appointment has been widely interpreted as a conciliatory signal, though it may not be enough to appease the situation on the streets.

“Europe should watch closely these developments, as Kazakhstan is a key partner for its Central Asian strategy. Instability in Kazakhstan would have a tremendous impact on the regional setup”, Dumoulin stresses.