President Nursultan Nazarbaev, who had been this vast land’s ruler even before Kazakhstan emerged from the Soviet Union as an independent state, received the King of Jordan with full honours, including a presidential guard of some 100 elite soldiers who sang the national anthem. 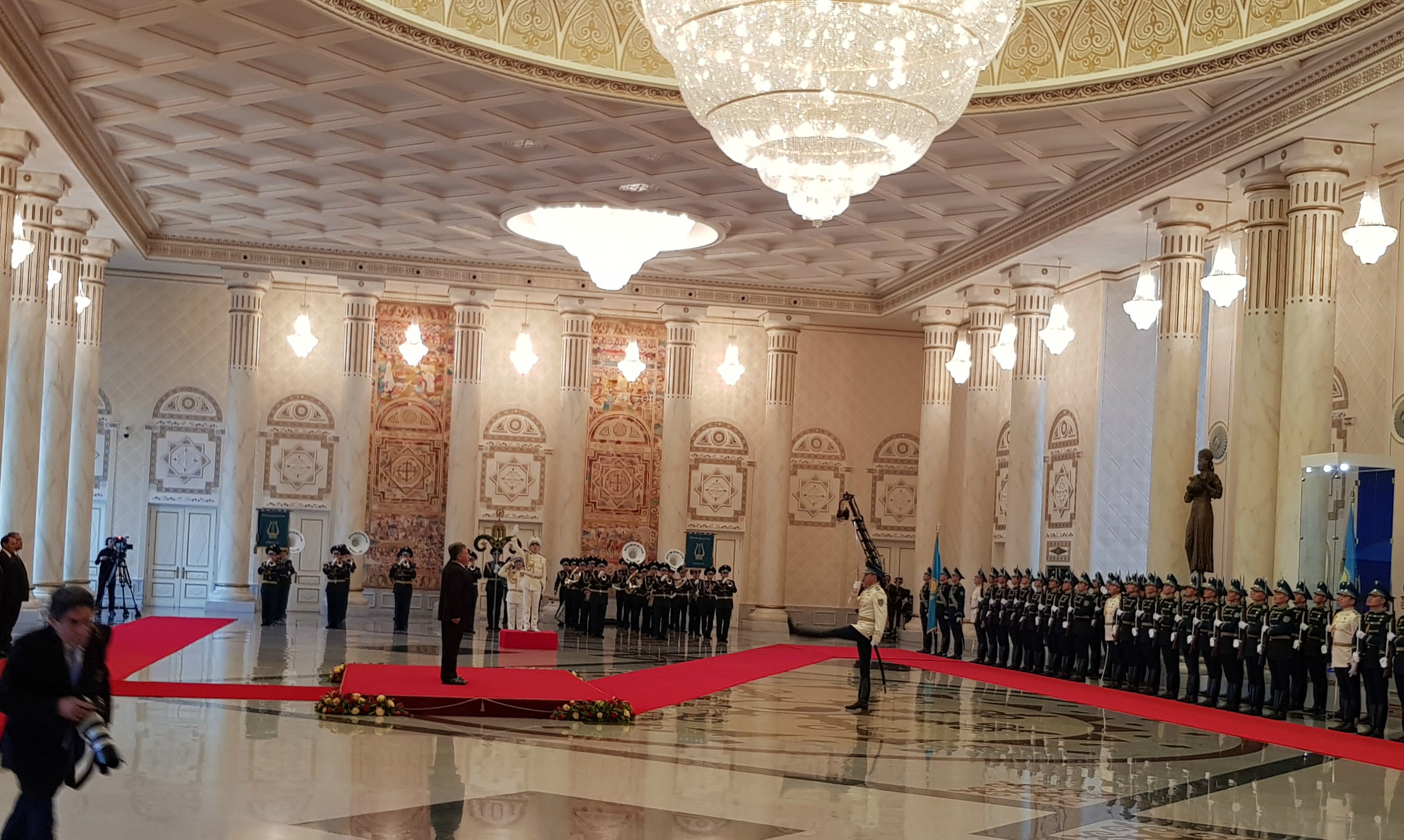 As Nazarbayev and Abdullah II went into a meeting room for their talks, the press watched and listened to the protocol statements via a video channel. Nazarbayev praised his guest for having continued the role of his late father King Hussein (deceased in 1999), with whom Nazarbayev had held friendly relations.

“You continued the role of your father as an ambassador of peace to the world. Kazakhstan tries to play the same role”, Nazarbayev said. He reminded that Kazakhstan was “one of the leaders of the anti-nuclear movement”, and that he himself closed the Semipalatinsk nuclear test site as the country gave up nuclear weapons inherited from the Soviet period.

Indeed, on 29 August 1991, Kazakhstan closed the Semipalatinsk site as the country banned nuclear weapons on its territory (the Soviet weapons positioned there could have made it the world’s fourth largest nuclear power, after Russia, the US and France).

The nuclear tests in Semipalatinsk caused a huge environmental disaster. After its closure, other nations also stopped nuclear tests.

Kazakhstan holds an annual anti-nuclear conference and Nazarbayev said he had established a prize to be awarded to those leaders who distinguished themselves in the fight against nuclear proliferation.

“You are the first to receive this prize. We hope you will continue to play an important peacekeeping role in the region”, Nazabayev told King Abdullah, reminding that Jordan plays an important part in the Astana Process, the Syria peace talks taking place in the capital of Kazakhstan.

“The fact that your country hosted a million of Syrian refugees and your government spends so much money for that must be appreciated by the entire world”, he added.

The King of Jordan repeatedly called Nazarbayev “my dear brother” and paid tribute to the family friendship. The international community appreciates the role Kazakhstan plays in international affairs, he said, adding: “If it wasn’t for your leadership, I think the world would have been a much more difficult place”.

Presser of King of Jordan Abdullah ll and President of Kazakhstan Nursultan Nazarbayev to begin pic.twitter.com/AX7FtsK5Zo

King Abdullah received the inaugural Nazarbayev Prize for a Nuclear-Weapons-Free World and Global Security. The Jordanian monarch was decorated for his input into “regional stability, global security and steadfast stance against war and the proliferation of weapons of mass destruction”.

Later on Wednesday, the two leaders made statements to the press but did not take any questions. Nazarbayev said that the issue of Qatar had been discussed as well.

Saudi Arabia led a six-nation effort to cut ties with Qatar on 5 June. The nations in question – Saudi Arabia, the United Arab Emirates, Bahrain, Egypt, Yemen and the Maldives – also banned all travel to and from Qatar and, with the exception of Egypt, ordered their citizens living in the country to leave.

Speculation is rife as to whether Kazakhstan, a Muslim nation, would be willing to mediate in the Qatar dossier.

In the corridors of the Presidential palace, journalists spoke to Kazakhstan’s Foreign Minister Kairat Abrakhmanov, who had announced the results of the Astana talks the night before. Kazakhstan only provides the framework for the talks, without being one of the official stakeholders (the Astana talks are centred around the “guarantor states” – Russia, Iran and Turkey).

Asked if Kazakhstan was becoming a universal mediator for different hotbeds of tension, Abdrakhmanov said:

“We are. We mediate in any of the post-Soviet [frozen conflicts]: Karabakh, Transnistria, Georgia. In any of them, we play some role. Sometimes we are approached.”

EURACTIV asked if the Ukraine peacemaking effort needed some fresh initiatives. The process has stalled despite the Minsk I and II agreements signed in September 2014 and February 2015 in the capital of Belarus. In his answer, the Kazakh diplomat emphasised that these agreements have no alternative.

A couple of hours later, journalists met with the Chairman of the Senate of the parliament in Kazakhstan Kassym Jomart Tokayev.

Asked about Ukraine, Tokayev, who previously served as director general of the United Nations Office in Geneva from March 2011 to October 2013, said:

“Ukraine is difficult. I’m personally not optimistic about the possibility of solving this issue very soon”, the politician said.

He added that parliamentary diplomacy was playing an increasingly important role. “We will be assisting to make this whole situation healthier and safer”, he said.

Kazakhstan, home to 4.5 million ethnic Russians and about 300,000 Ukrainians, was shocked by the Ukraine crisis. Nazarbayev was keen to mediate and helped arrange the first meeting in Minsk in August 2014, and then “Minsk II” in February 2015.

EURACTIV asked Tokayev about his country’s relations with the EU. But he stressed that Kazakhstan’s assessment of the EU was “quite positive”. Asked what he thought about the many problems the EU is facing, he briefly replied: “We don’t think the EU will collapse”.

EURACTIV also asked Tokayev about Kazakhstan’s ideas for reforming the UN and in particular the Security Council (UNSC), where the USA, Russia, China, France and the UK have a permanent seat. He said his country  supported the idea of reform by introducing a rotation in the UNSC, so that Kazakhstan can also sit at the table. “But we acknowledge this is a very difficult matter”, he added.