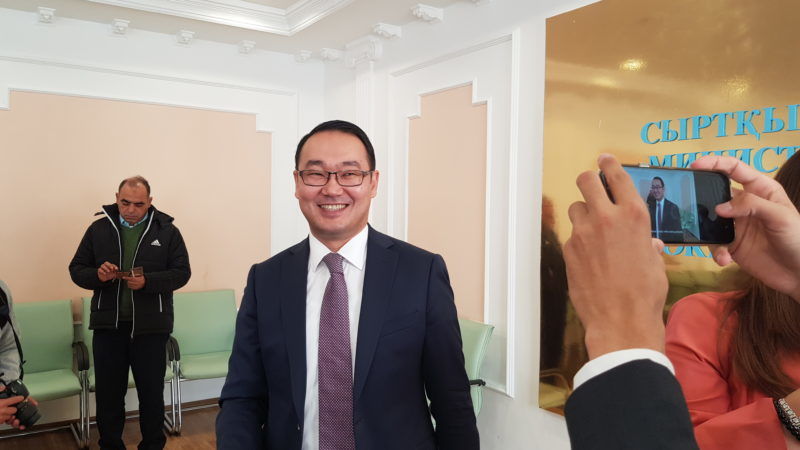 “We really believe in the power of dialogue,” the diplomat said, recalling that his landlocked country with such powerful neighbours as Russia and China was deeply committed to this form of foreign policy.

“If countries, if conflicting parties feel better here, in the windy climate of Astana, they are welcome to come […]. If Kazakhstan can be of any practical assistance to achieving this noble goal, we are ready,” Ashikbayer said.

As Ashikbayev met with journalists in the country’s foreign ministry, a nearby hotel in Astana hosted the seventh round of talks in the so-called “Astana process”, which supplements the Syria talks in Geneva with a more focused humanitarian dimension.

The talks have in the past few months focused on establishing “de-escalation zones” in Syria. The meeting was organised by the so-called “guarantors”: Russia and Iran, who support Syrian President Bashar al-Assad’s regime, and Turkey, which backs the opposition. The present talks are aimed at finalising a plan for four de-escalation zones across eight of Syria’s 14 provinces. 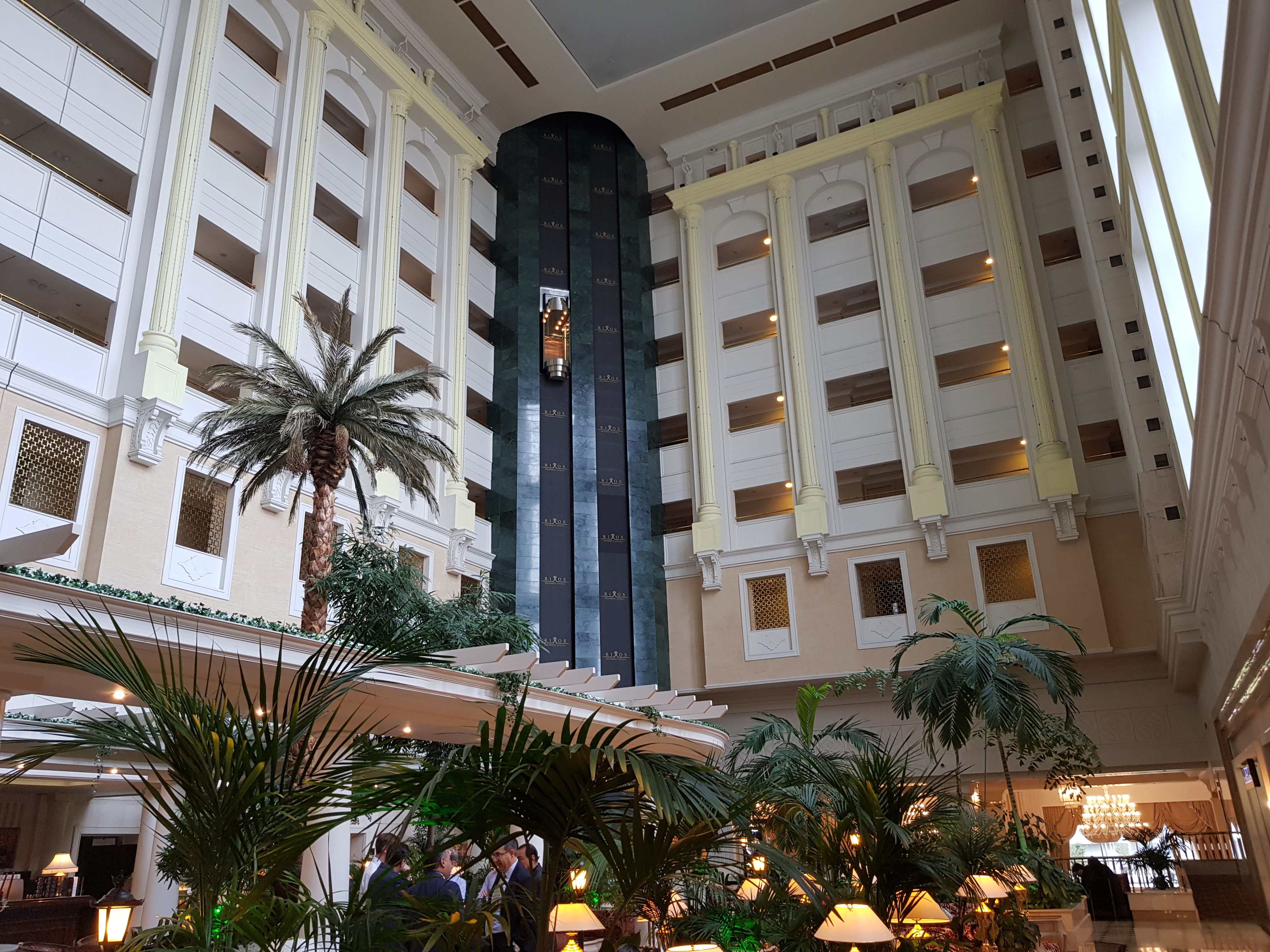 EURACTIV.com will report separately from the Syria talks in Astana after a press conference expected later on Tuesday.

Asked about the Syria talks, Ashikbayev said his country had no particular economic interest in that region and had accepted the mediation for humanitarian reasons.

“Our principal position when we accepted this proposal from the guarantor states was to ease the suffering of civilians on the ground, and so far the Astana process has been successful in easing this suffering. We reiterated from the very beginning that the Astana platform is a supplement to the Geneva peace talks.

“We really are concerned about the security situation. We are ready to continue our efforts along those lines,” he said.

Asked by a journalist who voiced the frustrations of the Syrian opposition, Ashikbayev recalled the saying that “bad peace is better than any conflict”.

“What the Astana process did achieve is de-escalation zones, alleviating the suffering of thousands and thousands of civilians, paving the way for humanitarian access, and gradually moving the country to a peaceful settlement, preparing the ground for future discussions at the Geneva platform.”

He added that with 25 opposition groups present at the talks “you cannot expect everyone to be happy”.

He also mentioned the Kurdish issue and many other dividing lines, adding: “But the situation on the ground drastically changed. The humanitarian situation has improved. This is a major outcome.”

The diplomat was assailed with questions about whether his country was prepared to mediate also in the North Korea nuclear programme and perhaps host nuclear material from that country as part of a deal.

Kazakhstan inaugurated a Low Enriched Uranium Bank on 29 August, backed by the IAEA. Although diplomats avoid commenting about its possible purpose, the idea for such a facility was born during the crisis with the Iranian nuclear programme. 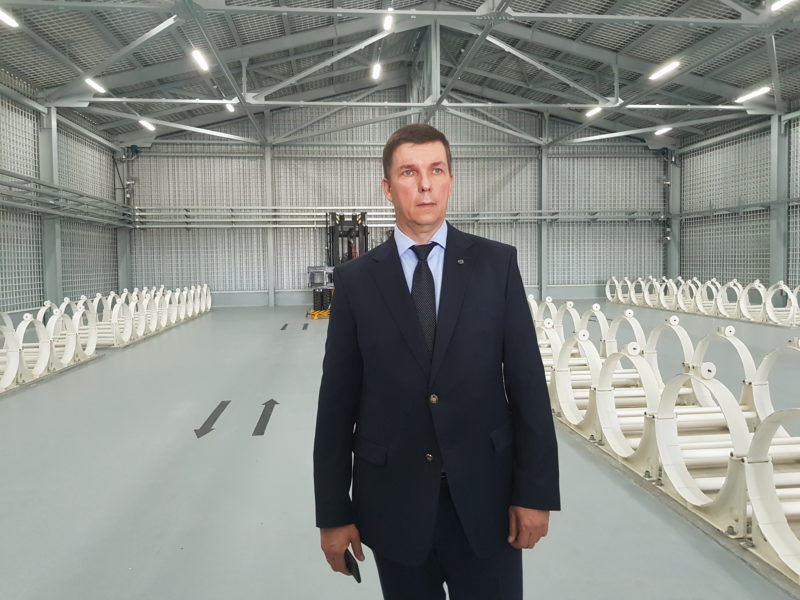 Ashikbayev said the real question should be whether the international community was ready for such talks, adding that as far as Kazakhstan was concerned, it would be “theoretically” ready to provide a platform for negotiations.

“But a lot of conditions should be met before we can even think of having those talks. There are so many parties involved, and it’s first and foremost up to them, to neighbouring states, to those parties concerned, if they think that uranium placed in Kazakhstan is suitable, comfortable for such a dialogue, I think my government would be positive,” he said.

EURACTIV asked about Kazakhstan’s position on the Iran nuclear deal, which is now challenged by US President Donald Trump. The diplomat took the opportunity to recall his country’s past mediation efforts in the case of the Iranian nuclear programme crisis.

“Kazakhstan invested a lot in the normalisation of the situation with Iran,” he said. After a crisis in the talks, Kazakhstan hosted two rounds of talks in 2013.

“Kazakhstan was also contributing at the very latest stage, by supplying 60 tonnes of natural uranium to Iran, in the very last days before the agreement was implemented,” he said, adding that his country believed in the “great benefits” of the deal. With regard to the US, he only stated that “each country has its own views”.

“Iran is our partner, Iran is our neighbour across the Caspian Sea, any instability across our border could affect us,” he said.

Iran is not a direct neighbour but Ashikbayev jokingly said his country used the old Soviet terminology of “near neighbourhood”. However, he warned against stereotypes which suggest that Astana’s foreign policy is doing Moscow’s bidding.

Asked by EURACTIV about Kazakhstan’s mediation in the case of eastern Ukraine, Ashikbayev explained that this case was sentimentally different, as it was a “family affair” that was of major concern for his countrymen.

“Our mediation capacity is growing. You asked about Ukraine: it’s not only a conflict in proximity to our borders but it’s also a conflict that has some domestic repercussions for Kazakhstan because our country is home to some four million ethnic Russians and 300,000 ethnic Ukrainians. And of course, the deterioration of relations between these two brotherly nations is not a desirable scenario for Kazakhstan,” he said.