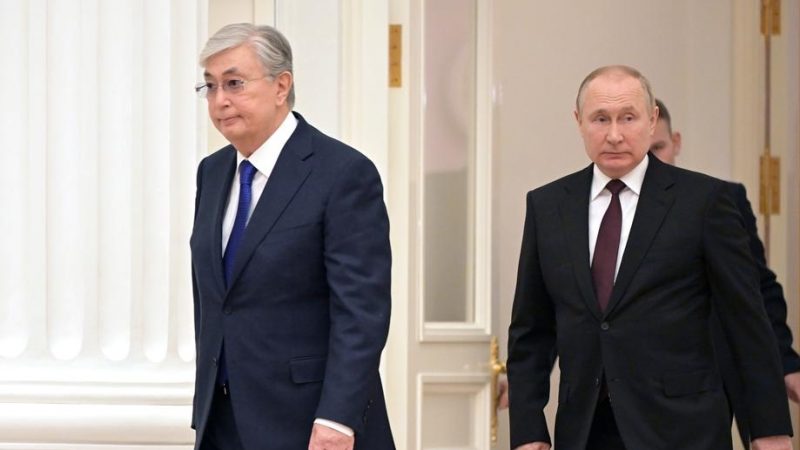 Russian President Vladimir Putin (R) and Kazakh President Kassym-Jomart Tokayev (L) arrive for a joint press conference following their talks at the Kremlin in Moscow, Russia, 10 February 2022. The Kazakh President is on a working visit to Moscow. [Kremlin pool/EPA/EFE]

Kazakhstan, one of Russia’s closest allies, has denied a request for its troops to join the offensive in Ukraine and will not recognise the so-called republics of Donetsk and Lugansk. Instead, an aeroplane carrying humanitarian assistance will leave Kazakhstan for Ukraine on 3 March.

A former Soviet republic, Kazakhstan has close relations with its northern neighbour Russia. Both countries are members of the Eurasian economy and the Collective Security Treaty Organisation (CSTO), under which Russia sent its army to deal with the January unrest in Kazakhstan.

However, Kazakhstan said it does not recognise the Russia-created breakaway republics upheld by Russia’s president, Vladimir Putin, as a pretext for its aggression in Ukraine.

The surprising development from a traditional ally of Russia has the support of the United States.

In the past, Kazakhstan has refused to recognise the annexation of Crimea and the so-called republics of Abkhazia and South Ossetia, Georgian territories occupied by Russian troops following the August 2008 war between Russia and Georgia.

On Tuesday (1 March), the President of Kazakhstan, Kassym-Jomart Tokayev, speaking at a ruling party congress, said his country’s position “should proceed from the critical need to ensure the security sovereignty and territorial integrity of our state”.

“As the country that hosted the OSCE summit in 2010, we insist on the principle of the indivisibility of Eurasian security. […] The principle of indivisibility and common security stipulates mutual understanding based on mutual trust. Unfortunately, this has not happened. The Minsk agreements remained only on paper, which led to the military operations on the territory of Ukraine”, Tokayev said.

The Kazakh president called for a negotiated solution.

“There is no other way. A bad peace is better than a good war. Without peace, there will be no development. Kazakhstan, for its part, is ready to provide all possible assistance, including intermediary services, if, of course, they are required”, Tokayev said.

On many occasions, Kazakhstan has made available its capital for negotiations, the best-known example being the “Astana Process”, which provides humanitarian relief in the Syria conflict.

At the congress, delegates voted to change the name of the ruling party from “Nur Otan” (Light of the Fatherland) to “Amanat” (Legacy). Reportedly, the change underscores the ongoing trend of taking distance from former president Nursultan Nazarbayev, who has fallen from grace after the January unrest.

Tokayev was in Moscow on 10 February, where he thanked his Russian counterpart for helping end violent unrest in the Central Asian nation last month, which both leaders blamed on international “bandits” and “terrorists”.

Kazakhstan has organised humanitarian assistance to Ukraine from the population, and the first aeroplane will bring such aid to the war-torn country on Thursday.