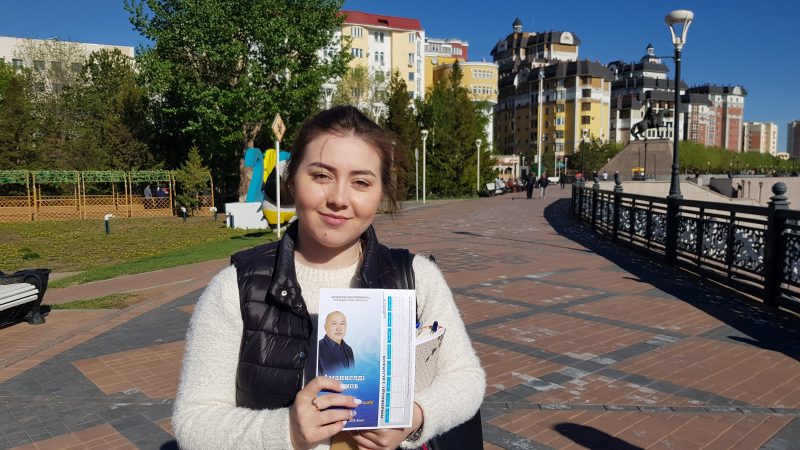 Kazakhs will vote for a new President on 9 June and, for the first time since the country’s independence, Nursultan Nazarbayev is not running. Diplomats say the winner will certainly be Kassym-Jomart Tokayev, but six other candidates have joined the race.

Speaking at the Astana Economic Forum, Nazarbayev said he could have run again and won by a large majority.

“I participated in five elections, and never obtained results under 85%,” he said and continued:

“Although my mandate had not expired, and I could be a candidate again, being sure 100% that I would be elected in the same way, changes are needed. A new approach, a new generation is needed. I am sure that the new team, the new generation, will bring in innovation”.

He said Kazakhstan was rich in natural resources, which is why under Soviet time it only extracted them and there was no processing. After independence, an industrial programme was put in place and a special reserve fund was created, to the present amount of $90 billion, which he said was a “solid amount” for the 18-million strong nation.

The second programme of independent Kazakhstan, in Nazarbayev’s words, was on infrastructure.

In Soviet times, all roads and railroads were heading North, to Russia, while in present days the country is part of the Silk Road and a lot of transport infrastructure in the direction East-West. $30 billion were spent on such infrastructure, including 14.000 km of roads, 2,500 km of railroads, two seaports on the Caspian and the dry port of Khorgos at the border with China, he said.

This project is already bringing good dividends, the first President of Kazakhstan said.

“Next – this work has to continue”, he said, adding that the next leadership must continue, focusing on improving the living standards.

“We have finances, we have managers, and this should be, in my view, the goal of the future leaders”, he said, before cracking a joke about a certain confusion in having “the first President, then the President”. “

There will be no duplication, There is one President, and he is the leader”, he said to big applause.

Tokayev was present but did not take the floor.

Tokayev took over as head of state after Nazarbayev surprisingly resigned on 19 March. Born in 1953, Tokayev is a career diplomat and a polyglot: He is fluent in Kazakh, Russian, English and Chinese and has knowledge of French.

He has served, among other positions, as director general of the United Nations Office in Geneva, and as a personal representative of the UN Secretary-General to the Conference on Disarmament. Nazarbayev described him as “the best prepared” among the candidates.

Six other candidates are running and apparently, all are running campaigns, with billboards on boulevards and distribution of leaflets.

The Astana Times announced on Friday (24 May) that the Central Electoral Commission (CEC) has accredited 125 international observers, including 22 long-term observers from the Election Observation Mission of the Office for Democratic Institutions and Human Rights (ODIHR) of the Organisation for Security and Cooperation in Europe (OSCE) for the elections.

The ODIHR mission is led by Ambassador Urszula Gacek and consists of a core team of 12 experts based in Nur-Sultan (as the capital was re-named after Nazarbayev stepped down). ODIHR has requested OSCE participating states to send 24 long-term observers and 300 short-term observers.

The Bulgarian ambassador to Kazakhstan, Vassil Petkov, told EURACTIV that the Bulgarian MPs who will come as observers will also use the opportunity to meet with their Kazakhs colleagues.

The accreditation of observers from other countries and international organisations will be open until 3 June.