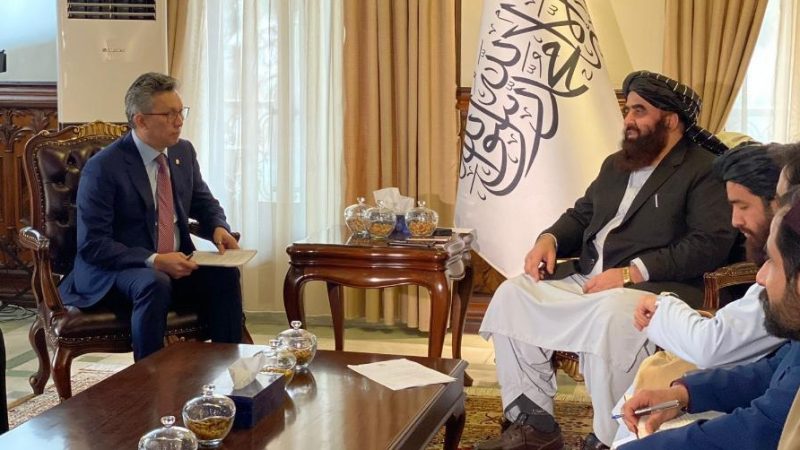 The minister of trade of Kazakhstan, Bakhyt Sultanov, visited Kabul over the weekend, this being the second such high-level visit recently, after Erzhan Kazykhan, the special representative of Kazakhstan’s president, also called held talks with the Taliban leadership.

Sultanov headed a Kazakh trade and economic mission to Afghanistan on 25 December. According to diplomats, the visit illustrates Kazakhstan’s effort to help Afghanistan avoid a humanitarian catastrophe and mass migration which would affect the wider region, including Europe.

The delegation included officials from ministries and QazTrade, the national export operator, and representatives from several Kazakh companies.

According to the website of the Kazakh embassy to Belgium, during the visit, Sultanov held talks with representatives of the self-appointed Afghan administration, including Deputy Prime Minister Abdula Salam Hanafi, Foreign Minister Amir Khan Muttaki, and Minister of Trade and Industry, Nuriddin Azizi.

Sultanov reportedly stated that Kazakhstan has always adhered to and will continue to adhere to the policy of non-interference in the domestic affairs of Afghanistan.

After the hectic withdrawal of the US last August, Afghanistan is under the control of the Taliban, and Western embassies were evacuated from Kabul. Having designated the Taliban as a terrorist group for years, the US keeps tight control over economic and financial relations, which creates the risk of a major humanitarian catastrophe in the country.

“We traditionally stand for a peaceful, united, independent, and prosperous Afghanistan, free from terrorism and drug-related crime. The Afghan people have the right to determine their own future in search of lasting peace and development,” he is quoted as saying.

He reportedly reminded that, as instructed by President of Kazakhstan Kassym-Jomart Tokayev, the Kazakh government had allocated humanitarian aid to Afghanistan in the form of 5,000 tons of flour.

“Today, we brought with us 1.5 tons of cargo (medicines). In addition, a humanitarian cargo with food and medicines in the amount of about 155 tons equal to $1.9 million will soon arrive in Afghanistan,” he added.

Minister Sultanov also informed the representatives of the Afghan government that Kazakhstan fully supported and actively participated in the UN efforts to tackle the humanitarian crisis in Afghanistan. According to him, the World Food Program recently purchased 20,000 tons of Kazakh flour.

“Our country, like other international partners, expresses hope that the active phase of the conflict is over and the time has come for the country’s reconstruction in the post-conflict period,” he added.

The Kazakh delegation assured that Kazakhstan is interested in maintaining and increasing the scope of bilateral trade, both in volumes and by a range of goods.

Kazakhstan is a major supplier of flour and grain to Afghanistan. Lately, the Afghan market has consumed more than half of all exports of Kazakh flour and more than 10% of grain exports.

Minister Sultanov drew attention to opportunities for expanding the range of goods turnover. The parties reportedly noted that including these goods in the bilateral trade turnover could be beneficial to both Kazakhstan and Afghanistan and contribute to an increase in bilateral trade turnover. At the same time, the Kazakh representatives expressed readiness to purchase more fruits and vegetables from Afghan suppliers.

The Kazakh side also focused on enhancing the trade balance between the countries. One of the tools can be industrial cooperation of Kazakhstani and Afghan business on the territory of the centres of cross-border cooperation created by Kazakhstan, including the International Center for Industrial Cooperation “Central Asia”.

In the course of the visit, Minister Sultanov took part in the Kazakh-Afghan business forum. From the Kazakh side, 16 companies working in food production, manufacturing of furniture, and textile products participated.

Following B2B meetings and a business forum, memorandums were signed regarding the supply of pasta, flour, and other products to Afghanistan.