File photo. Kazakh President Kassym-Jomart Tokayev speaks next to German Chancellor Angela Merkel (not pictured) during a joint press conference after their meeting in the Chancellery in Berlin, Germany, 5 December 2019. [Felipe Trueba/EPA/EFE]

The Central Asian country is rich in resources, with a relatively small population and a huge territory, and keen to attract foreign investment. The EU as a whole is the number one investor in Kazakhstan.

From the early stage of its post-Soviet transition, Kazakhstan has consolidated strong state power to avoid chaos. Today, as the country is considered successful at home and internationally, this centralisation is being reduced. 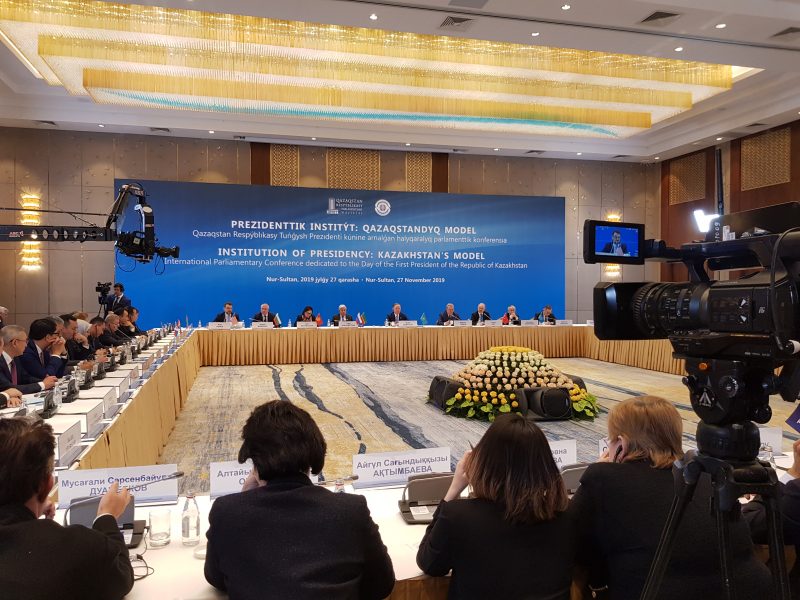 Tokayev won the presidential election on 9 June 2019 with 70% of the votes, running against six other candidates – a novelty in terms of pluralism for the former Soviet republic.

In his first state-of-the-nation address delivered in September, he promised to oppose ‘unsystematic political liberalisation’ and instead carry reforms ‘without running ahead’.

Speaking on Friday to the Council of Public Trust, an institution he created in July to tackle some of the country’s most acute issues, Tokayev said the country was “overcoming the fear of alternative opinion”.

“My formula of ‘different opinions – one nation’ found its direct embodiment in the National Council of Public Trust”, he said, adding that this was not just a slogan or idea, but real action. He further stressed that the government did not believe that disagreement is a destructive or socially dangerous phenomenon.

“We know that there is a demand for further political transformations in our society,” said Tokayev, specifying, however, that “democracy should serve the purpose of development and creation, not disunity and disintegration”.

“We must strengthen the creative basis of the political process so that pluralism becomes an important element in enhancing economic well-being and human capital”, the president said, adding that for this purpose, it was very important to find “the most reasonable path, the so-called ‘golden means’, which will ensure the progressive development of our nation”

“This, after all, is the demand of our society”, he said, elaborating that, based on this, “the first package of political initiatives” had been worked out, comprising the following measures:

First Kazakhstan will introduce the notification principle of organising public rallies, which he said was consistent with the country’s Constitution.

“All public protest is permitted if it does not violate the law and public order and does not interfere with the peace of citizens,” Tokayev said. The government should submit the respective draft law to Parliament, he added.

The second measure, Tokayev said, was halving the registration threshold for the creation of a new political party from the current 40,000 members to 20,000 members, which in his words would allow for increased civic engagement.

“In general, we must gradually change all laws related to political parties and elections,” he said.

Third, a mandatory 30% quota for women and young people should be included in the electoral party lists, the president said. “We must encourage active participation of women in politics, especially in the legislative process”, he said.

“We need to create not only social elevators for young people, but also political ones, to pass the torch of independence to new generations of patriots,” said Tokayev.

The next step in the democratic process in Kazakhstan is likely to be parliamentary elections in 2020. The date has not yet been set though the likely time is April.

“We need to establish the institution of parliamentary opposition”, Tokayev said, adding that “we need to understand the main condition for a new social paradigm – the presence of alternative views and opinions”.

Tokayev also instructed the ministry of foreign affairs to start procedures to join the Second Optional Protocol to the International Covenant on Civil and Political Rights, aimed at abolishing the death penalty. Kazakhstan has maintained a moratorium on capital punishment since December 2003.

Capital punishment in Kazakhstan has been abolished for ordinary crimes but is still permitted for crimes occurring in special circumstances (such as war crimes or terrorism). In 2008 and 2016, Kazakhstan voted in favour of the UN Moratorium on the Death Penalty.