People in Azerbaijan ‘have a desire to be active’, says newly-elected MP 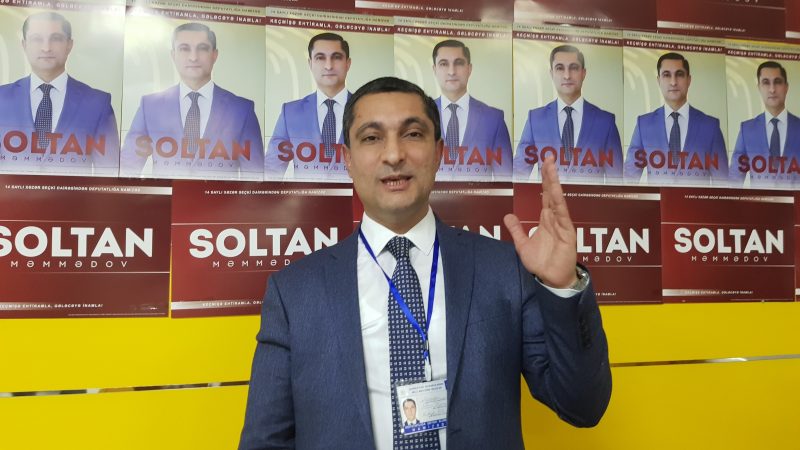 Azeri people were excited about the elections and have a desire for change, assures Soltan Mammadov, an independent candidate for the 125-seat parliament of Azerbaijan who spoke to EURACTIV as the polling sections were closing on Sunday (9 February).

According to preliminary results released on Monday, Mammadov became a member of the country’s parliament – the Milli Majlis – with 47.2% of the votes.

With his election, Mammadov becomes the representative of a region that was until now led by the country’s vice president and first lady, Mehriban Aliyeva.

Mammadov has more than 20 years of experience in social policy and public health, much of it gained at international level. He was chairman of the finance committee of the Global Fund to Fight AIDS, Tuberculosis and Malaria between 2014-2015 and served on the fund’s board as an Eastern Europe & Central Asia Constituency representative.

Since then, he was the director of the international relations department of the Heydar Aliyev Foundation, the country’s fund that carries out a mix of cultural, political and charitable projects.

“My desire [to serve] mainly comes from the fact that I’m relying on my experience of working with the population,” says Mammadov. However, this time is different, he adds, because he will represent people directly. “For more than 20 years, I have liked working with the citizens, working with people, implementing many social projects,” he said, speaking to EURACTIV’s Senior Editor Georgi Gotev.

Mammadov explained that he ran as an independent candidate because he is used to unaffiliated service in foundations and refrains from directly criticising the Azeri leadership.

“You know what, even in my personal life I like to first be critical of myself. There are many problems that are not the issue of the country’s policies,” said Mammadov, who prefers focusing on implementation.

He hopes to continue his work on social and health policy as an MP but also help fix his country’s infrastructural issues, lack of secure access to potable water, and lagging connectivity between villages.

However, healthcare and education remain his top priority, which in his opinion require urgent solutions within 6-8 months. After building a new school, he also intends to open new medical centres in his constituency.

“What do people want from a member of parliament?” asked Mammadov in a rhetorical question. “As our president always says, an MP must be of the people, he must work and live with them.”

Following this philosophy, the newly-elected parliamentarian plans to meet with his constituents regularly and in different formats. Mammadov thinks that the feeling is reciprocated by citizens, who are excited about taking a more active role in the electoral process.

“People have a desire to be active, because now they have completely different expectations,” said Mammadov, recounting his interactions with voters.

Overall, he is satisfied with the election turnout despite harsh weather conditions. And although he acknowledges pressures were sometimes exerted by local election observers affiliated to political parties, he does not think the problem was systemic.

In a preliminary assessment published on Monday (10 February), the Organisation for Security and Cooperation in Europe (OSCE) criticised the elections for lacking a “meaningful choice” despite the larger number of candidates. 1,314 candidates were registered.

The OSCE also found issues with counting and tabulation of votes on election day and expressed disappointment at the lack of female candidates. None of the 55 registered parties are led by a woman, and only about a fifth of the candidates were female.

“There were cases when one of the observers was demanding, asking or doing more” than what is permitted by law, Mammadov said, admitting that “such issues did arise”.

“But this is routine because other observers or electoral commission members explain the rules right away.”

Asked about how he expect his life to change after the election, Mammadov said he was unsure. “That’s a good question. I’m not a pessimist, but I always try to think of the bad, thinking of good things would be too easy.”

His main concern is the family time he will miss with his two daughters, but he hopes that his budding political career will inspire them.

“What we are doing for our country, it’s precisely the future of our children.”