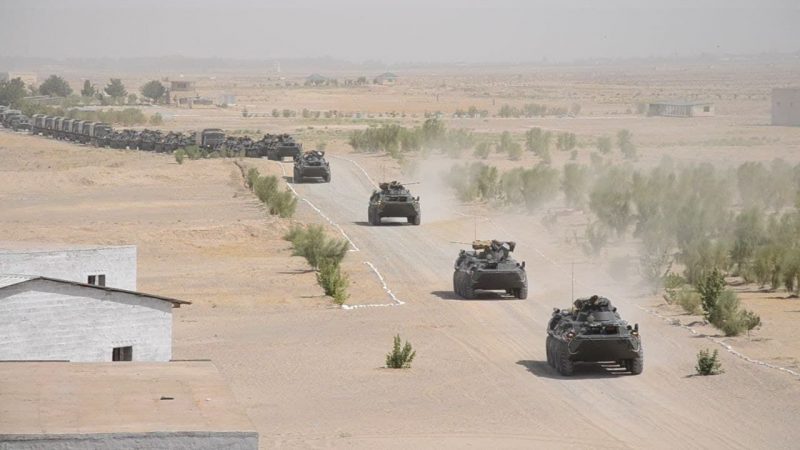 Uzbekistan and Russia carry out joint exercises near the Afghan border. [Twitter @Eldruso]

Troops from Russia and Uzbekistan began joint military drills on Monday (2 August) near the Afghan border, amid fears in both countries that a worsening security situation in Afghanistan could spill over into Central Asia.

Russia said 1,500 Russian and Uzbek troops would take part in the five-day exercises that began at the Termez military site in Uzbekistan, the TASS news agency reported.

The joint Russian-Uzbek exercise started at the Termez mountain range in the Surkhandarya region of the Republic of Uzbekistan.

The exercise, will last 5 days, will be attended by about 1.5 thousand servicemen of the Armed Forces of the #RF and the Republic of #Uzbekistan. pic.twitter.com/MRerQks9hH

In a sign of how seriously Moscow views the potential threat from Afghanistan, it said it would send a much bigger military contingent to Tajikistan for separate trilateral exercises.

Those separate drills are expected to take place on 5-10 August and involve Russian, Tajik and Uzbek forces. Uzbekistan said on Monday its unit had arrived in Tajikistan.

Security has rapidly deteriorated in Afghanistan as the United States withdraws troops. Moscow fears that could destabilise its southern defensive flank and push refugees into its Central Asian backyard.

On Monday, Russia’s defence ministry said that 1,800 of its soldiers would take part in the Tajik drills, instead of 1,000 as initially planned. More than 2,500 troops would be involved in total, it said.

Moscow will also use 420 units of military hardware for the drills, double the quantity originally planned, it said.

Tajikistan’s defence ministry said in its statement that the drills would involve more than 300 armoured vehicles, 25 combat and transport helicopters and an undisclosed number of fighter and bomber jets as well as artillery.

“The aim of the drills is to effectively test the combat ability of military units in the event of the situation being destabilised on the state border,” it said.