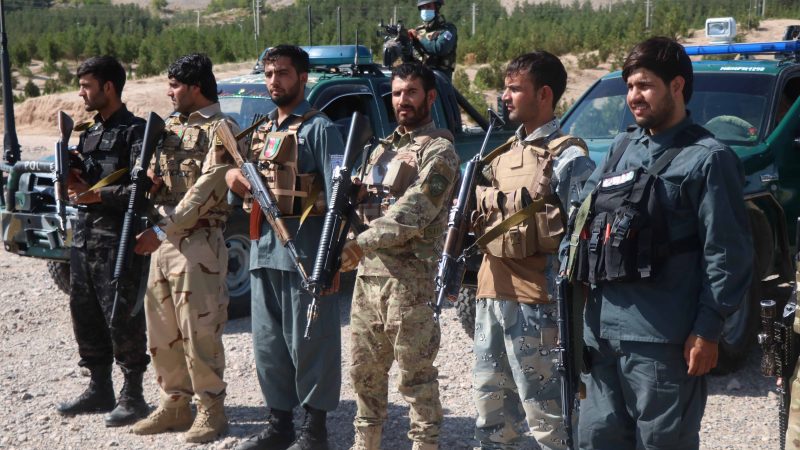 Afghan security officials stand guard during a ceremony in which people belonging to different political parties distributed gifts and souvenirs to Afghan forces to encourage their fighting for the country, in Herat, Afghanistan, 5 July 2021. Nearly 60 of Afghanistan's 370 districts have fallen to the Taliban since May 2021, marking the first time in two decades of war that the insurgents have taken control of so many districts in such a short period of time. [EPA-EFE/JALIL REZAYEE]

The crossings on Sunday underscored the rapidly deteriorating situation in Afghanistan, where foreign troops near a complete withdrawal after 20 years of war and with peace negotiations stalled. 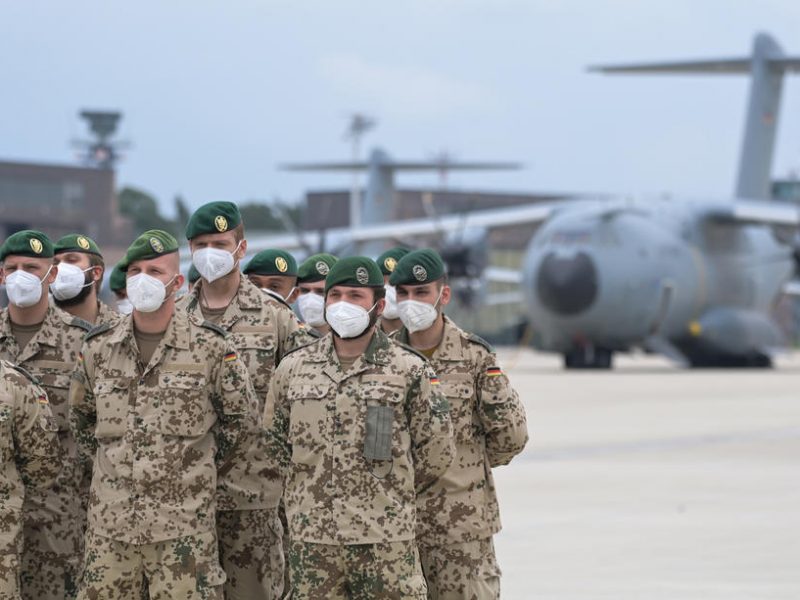 “A historic chapter comes to an end, an intensive deployment that challenged and shaped the Bundeswehr, in which the Bundeswehr …

Tajik President Emomali Rakhmon made a flurry of international calls to discuss the situation with allies in the region, including Russian counterpart Vladimir Putin whose country has a big military presence in Tajikistan.

Putin assured Rakhmon that Moscow would support the former Soviet republic to stabilise its border with Afghanistan if needed, both directly and through a regional security bloc, the Kremlin said in a statement.

Russia operates its largest military base abroad in the impoverished Central Asian country, where it stations tanks, helicopters and ground attack aircraft.

Tajikistan is looking into setting up camps for potential refugees from Afghanistan, government sources told Reuters earlier on Monday.

Hundreds of Afghan security force members have fled swift Islamist Taliban advances in the north. But Sunday’s retreats were the largest confirmed, coming just two days after the United States officially vacated its main Bagram air base in Afghanistan as part of a plan to withdraw all foreign troops by 11 September.

The Taliban took over six key districts in the northern province of Badakhshan, which borders both Tajikistan and China, following which 1,037 Afghan servicemen fled across the border with Tajikistan’s permission, its border guard service said.

On Sunday, Afghan President Ashraf Ghani spoke to Rakhmon by phone to discuss the developments.

“Special attention was paid to the escalation of the situation in Afghanistan’s northern areas adjacent to Tajikistan,” the Tajik president’s office said in a statement.

It added that Rakhmon expressed concern about “forced crossings” by members of the Afghan security forces.

A senior Afghan official confirmed there had been hundreds of crossings into Tajikistan but did not know the exact number.

“The Taliban cut off all the roads and these people had nowhere to go but to cross the border,” he told Reuters.

Last week, US forces vacated Bagram, bringing an effective end to the longest war in US history, as part of an understanding with the Taliban, against whom it has fought since ousting them from power after the 11 September 2001 al Qaeda attacks on the United States.

The air base was a vital military hub for the Soviet Union after it invaded Afghanistan in 1979. The Soviets withdrew in 1989.

The Taliban have ceased attacks on Western forces but continue to target Afghan government and security installations as they make rapid territorial gains across the country.

Zabihullah Atiq, a parliamentarian from Badakhshan, told Reuters that the Taliban had captured 26 of the border province’s 28 districts – three of which were handed over to the insurgents without a fight.

Afghan security force members used various routes to flee, he said, but added that the Taliban captured dozens of personnel in Ishkashem district where Tajik border forces had blocked any crossing.

Tajik officials said they let in 152 people from Ishkashem, but did not comment on whether anyone was denied entry.

Afghan National Security Adviser Hamdullah Mohib, in Moscow on Monday for security talks, said government forces had not anticipated the Taliban offensive but would counterattack.