By Dilshat Zhussupova | The Astana Times 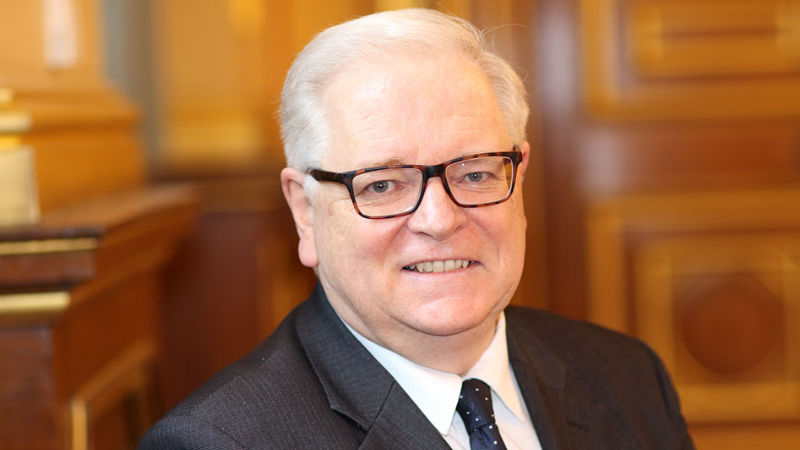 Michael Gifford is the United Kingdom's Ambassador to Kazakhstan. [britishchamber.kz]

As Kazakhstan enters a new period in its history, the United Kingdom seeks to continue supporting the country’s development and maintaining and strengthening relations, British Ambassador to Kazakhstan Michael Gifford told The Astana Times.

Former Kazakh President Nursultan Nazarbayev resigned March 19 and President Kassym-Jomart Tokayev, who stepped in to serve the remainder of his term, recently called for an early election on June 9.

“This is an important moment of change for Kazakhstan. The leadership transition that we are witnessing is being closely watched around the world, including in the United Kingdom. The resignation of Nursultan Nazarbayev was a momentous event in the history of Kazakhstan and Central Asia. We should acknowledge his role as having been central to the establishment of the country and the development of the sovereignty and economy of Kazakhstan,” said Gifford.

Strengthening relations throughout Kazakhstan’s period of political change began this month when U.K. Minister of State for Europe and the Americas Sir Alan Duncan visited to the capital to consolidate the ties between the British and Kazakh governments, which have enjoyed diplomatic relations since 1992. Baroness Emma Nicholson of Winterbourne, U.K. Prime Ministerial Trade Envoy to Kazakhstan, also visited Atyrau, Almaty, and the capital in late April and early May to deepen bilateral trade, which, according to the British statistics, reached approximately $3.65 billion last year. The level is unsurprising, as the U.K. is Kazakhstan’s sixth largest investor and among its largest trade partners in terms of trade turnover.

“Our relations are continually evolving and cover a wide range of sectors, not just trade and industry but also culture, education, defence, political cooperation, legal, security and energy,” said Gifford, noting the annual U.K.-Kazakhstan military exercise Steppe Eagle that in June will include additional partners.

The facts that 4,000 Kazakh students are currently studying in the U.K. and that more visas are issued to Kazakhstan’s students than those from Australia or Brazil are indicative of the value of a U.K. education. The United Kingdom is the most popular destination for Bolashak programme students completing postgraduate studies and the British government has also funded Chevening Scholarships for more than 200 Kazakh students to study at the postgraduate level, after which many return home to work in leadership positions.

“This is a way of ensuring strong links between the United Kingdom and Kazakhstan in the future,” said Gifford. “We also have many institutional links. The London School of Economics and the University of London have a partnership with the Kazakh-British Technical University; the University of Cambridge partners with the Nazarbayev Intellectual Schools while Coventry University, Loughborough University and many others are also active here. I have been very impressed by the willingness of British institutions to look toward Kazakhstan for establishing partnerships.”

“We are increasingly active in cultural cooperation through the British Council,” he added. “The Cambridge University Press is cooperating with Kazakhstan’s National Translation Bureau to produce an English-language anthology of Kazakh literature, which will be an important cultural milestone. The British Council is also helping Kazakhstan develop its own creative industries because, in the United Kingdom, the creative economy is a very important part of our national economy. We have been running the Creative Central Asia forum in the region for several years. Last year, creative economy leaders from Central Asia and the United Kingdom came together in Nur-Sultan to talk about ideas and how to develop creative industries on a more solid foundation.”

The July 5 launch of the Astana International Financial Centre (AIFC) set a new level for the countries’ legal and financial services cooperation. The April 10 English Law Summit gathered leading Kazakh and U.K. legal professionals in the capital to discuss developments in English law and its benefit for businesses.

“At the AIFC, you have a combination of world-class legal and financial experts and an arbitration court based on English law,” said Gifford. “We also have very talented individuals involved with the AIFC, including Lord Woolf, who is the Chief Justice of the AIFC Court and one of the most influential and well-known figures in the U.K. legal sector, and many other justices who have deep experience in commercial arbitration law.”

Gifford, who began his post in January 2018, aims to ensure his nation will continue playing a central role in developing and diversifying Kazakhstan’s economy, engaging with the government to ensure the country’s sovereignty and working closely in important areas such as China’s Belt and Road Initiative. The ambassador, who has become recognisable from his video blogs on Facebook (BritishEmbassyKazakhstan) and Twitter (@MikeGiffordFCO), also hopes to continue learning Kazakh and Russian and travelling more in Kazakhstan.