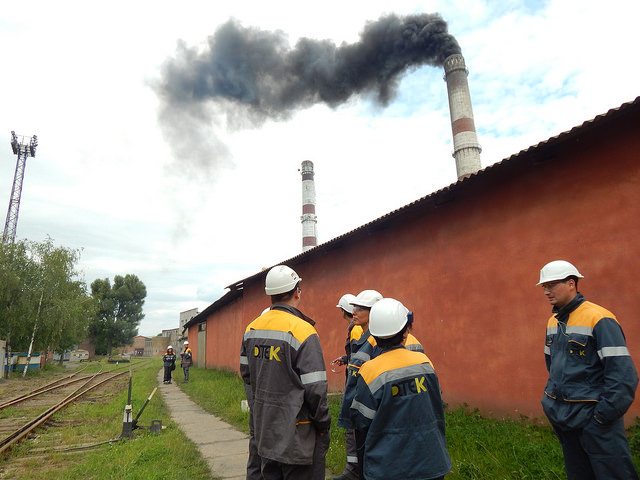 Ukraine's coal industry was devastated by fighting in the Donbass region. Pictured is the Dobrotvir plant in west Ukraine. [CEE Bankwatch/Flickr]

Ukraine faces an unprecedented energy crisis after the loss of coal mines and shale gas fields in war-torn regions, and Russia’s push to bypass it as a transit country for natural gas to Europe, the International Energy Agency (IEA) has warned.

Russia’s annexation of Crimea further hit domestic energy production in Ukraine, according to an IEA report, which was published yesterday, as a Gazprom boss cautioned against any European Union attempts to block new pipelines.

Also on Monday, Russia’s energy minister said his country would not renew transit contracts with Ukraine, and there were reports of fresh fighting in separatist-held territory.

“Ukraine is confronted with unprecedented challenges as it faces geopolitical, economic, financial, humanitarian and energy crises at the same time,” the IEA report on Eastern Europe, the Caucasus and Central Asia said.

Since it erupted last year, the Ukraine crisis has hit energy imports and denied Ukraine revenue from transit costs, according to the IEA.

It warned that new pipelines bypassing Ukraine, such as the mooted Turkish Stream through Turkey and Greece, could ultimately strand “severely ageing” Ukrainian gas infrastructure. That infrastructure will need huge investment to handle future lower volumes of gas transit, the IEA said.

Ukraine is currently the largest transit country for natural gas in the world. About 40% of Russian gas supplies to Europe go through Ukraine, which has needed two international bailouts since 2008, most recently last year.

Ukraine’s stability was important for the EU’s energy security, the IEA said. In 2014, as relations worsened after the ousting of Kremlin-backed Ukranian President Viktor Yanukovych, Russia turned off the taps.

The resulting shortages in the EU gave political impetus to the Energy Union project, which aims to bolster the bloc’s resilience to such shocks.

Alexei Miller, the head of Russia’s top gas producer Gazprom, warned the EU on Monday against moves to block Moscow’s plans to transit gas to Europe through other routes.

Russia and Ukraine signed a gas contract in 2009, which expires in 2019. Russia does not plan to extend its gas transit contract with Ukraine after the existing deal expires, Russian Energy Minister Alexander Novak said yesterday.

This was because of state monopoly Gazprom’s strategy to diversify export routes, the IEA report said.

Gazprom has reduced Ukraine’s transit from over 65% of total Russian gas exports to Europe by 2007, to below 50% in 2014. Supplies to Germany, France and Belgium are being routed away from Ukraine via Nord Stream. The Belorussian Yamal, or Northern Lights routes, could also offer lower transportation costs in the future.

Ukraine has large coal resources, but most of its 300 mines are located in the war-torn Donbass region. “Damage caused by military action to the coal mining and energy-intensive industries in this region is immense,” the report said.

More than 6,000 have been killed since the conflict erupted a year ago, when rebels declared independence from Kyiv. Ukraine and the West say they have evidence that Russia has sent men and weapons to support the rebels, a charge Moscow denies.

Coal supplies from the Donbass to power plants and central Ukraine stopped almost entirely in the middle of 2014 because of destroyed transport links. This poses a “major level of irreversible damage for the coal and industry sectors”.

Ironically, coal and electricity imports from Russia are among the options the Ukrainian government is looking at to mitigate the problem.

Ukraine has scope to develop its domestic gas production. Estimates for natural gas production are 27-30 bcm by 2025, the IEA said.

But the price of domestically produced gas will need to increase to raise the investment needed. Household gas bills are subsidised by the state in Ukraine.

The price for consumers is set to increase by nearly four times to 1,590 Ukrainian hryvnia (about €64) per thousand cubic metres (kcm) from UAH 419/kcm.

Ukraine has considerable unconventional gas potential, the IEA said, but future shale gas developments led by Shell in the east, and Chevron in the west, were now uncertain.

The projects were halted in 2014 because some of the shale concessions were close to the conflict zones.

The Minsk ceasefire between separatist and government forces, struck in February, remains in place. But yesterday, military sources in Kyiv told Reuters that one Ukrainian serviceman was killed and six were wounded in separatist territories.

It accused rebels of using heavy weapons that were meant to have been withdrawn under the ceasefire deal. The truce, brokered in the Belarussian capital, is still technically in force, though both sides accuse each other of intensifying attacks in the past few days.

The foreign ministers of Ukraine, Russia, France and Germany met in Berlin later on Monday (13 April) to discuss the next steps in implementing the ceasefire agreement.

Before 2012, Ukraine got all of its natural gas imports from Russia. All energy imports to Ukraine decreased in 2014, the IEA report said.

About 92% of gas imports were from Russia, with the remainder coming mainly from Germany, Hungary, Austria and Poland.

Since April 2014, Ukraine has ramped up reverse flow gas imports from the EU. They reached 0.9 bcm per month by the end of the year. Reverse gas flows is when customers of Russian gas in the EU sell the gas to Ukraine.

“2014 marked a fundamental turning point in Ukraine’s foreign gas trade,” the report said, “For the first time ever, the share of imports in total gas consumption was below 50%.”

Ukraine’s government needs to substantially revise its 2030 energy strategy to bring it up to date, the IEA said. It was written before the crisis escalated and makes no mention of measures to boost energy supply security and efficiency.

Efficiency had multiple advantages, including job creation and health benefits, said IEA executive director Maria van der Hoeven at the launch of the report in Brussels.

The new strategy would need to promote a substantial increase in domestic gas production and other domestic energy sources, and improve conditions to attract private investment, the report said. More suppliers would also need to be found.

Ukraine brought in emergency measures to manage shortfalls during the 2014-2015 winter.

“But more robust policies and measures will be required to address possible gas, coal and electricity supply disruption risks in the short to medium term,” the report said, before calling on Ukraine to fundamentally reform its energy sector to encourage competiton and investment.

The European Commission was asked to comment specifically on Ukraine but did not want to add to those below, made in the press release accompanying the report.

The annexation of Crimea, and the shooting down of a Malaysia Airlines flight by Russian-backed rebels, lead to EU sanctions, which still hold.

Over 6,000 have been killed since the conflict erupted a year ago, when rebels declared independence from Kyiv. Ukraine and the West say they have evidence that Russia has sent men and weapons to support the rebels, a charge Moscow denies.