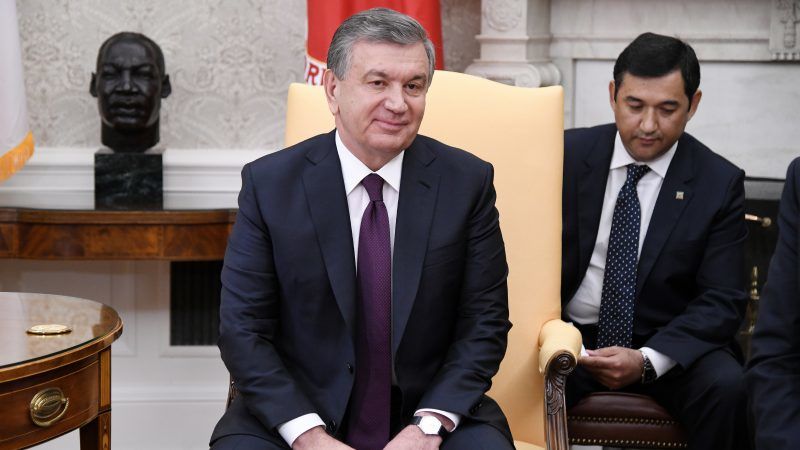 President of the Republic of Uzbekistan Shavkat Mirziyoyev looks on during a meeting with US President Donald J. Trump in the Oval Office of the White House in Washington, DC, USA 16 May 2018. [Pool/EPA/EFE]

A weak currency could have negative implications for Uzbekistan’s still struggling economy, such as reversing some of the progress made by the reforms, writes Ekaterina Zolotova for Geopolitical Futures.

Geopolitical Futures is a global analysis company founded and led by George Friedman, an American political scientist, author, and businessman.

It’s been a tough year for some of the world’s major currencies. The Turkish lira, the Russian ruble, the Chinese yuan and many others have declined steadily, with some dropping quite dramatically in August. Some have recovered slightly, but the overall trend remains the same. And now, we can add Uzbekistan to the list. The Uzbek currency, the som, has been declining since early August. On 2 October, it was valued at 8,179 soms to the dollar. This could mean new challenges for the country’s economy, which has been undergoing liberalization reforms since Shavkat Mirziyoyev took over as president in late 2016.

Reforms include the liberalization of prices, the restructuring of state-owned enterprises and the empowerment of the central bank. The reform most relevant to the decline of the som, however, was the deregulation of foreign currency exchanges in September 2017. The day after the government announced the reform, the value of the currency fell by 50%, from 4,210 soms on the dollar to 8,100.

Last February, the som hit its lowest point since the government first floated the currency, but buoyed by rising earnings from exports – which became cheaper for foreign customers as the som fell – the currency began to rebound somewhat. With a stronger som, the cost of imports declined and domestically produced products became less competitive, both at home and abroad. (Rising imports would only add to Uzbekistan’s existing trade deficit. Between January and June of this year, the country’s imports totaled $9.9 billion while its exports totaled $7.8 billion.)

But the currency’s modest recovery didn’t last. In August, the value of the som began to fall again, and by early September, it began a free fall. It’s now lower than it was the day the government announced its currency liberalization reform.

A weak currency could have several implications for Uzbekistan’s still struggling economy. It could reverse some of the progress made by the reforms. One of the motivations behind currency liberalization was to crack down on black market trading. But when the som starts to slide, official exchange offices can run low on dollars, leaving Uzbeks, who are worried that their savings will dwindle as the som declines, at the mercy of black market traders.

Another worry is inflation. The central bank’s projected inflation rate for 2018 has been raised to 16-17% from 11.5-13.5%, thanks largely to the deregulating the price of goods, another recently introduced reform. The central bank has said that adjustments would be needed to control inflation, including a rise in the refinancing rate this month from 14% to 16%.

The falling currency is also concerning because of the rising level of foreign debt. Since the beginning of the year, Uzbekistan’s external debt has grown to $15.8 billion in July, according to the central bank. Though the Ministry of Finance had previously said it would not use foreign debt to fund the liberalization program, the rapid fall of the som a year ago left the government with little choice but to do so. In July, it signed a deal with Deutsche Bank worth €500 million ($576 million) to fund various investment projects in energy, transport, agriculture, medicine, petrochemicals, infrastructure, metallurgy, aviation and other sectors. In June, the World Bank and the Asian Development Bank agreed to jointly provide $800 million to finance development projects and to help Uzbekistan implement its reforms. Uzbekistan’s external debt as a percent of gross domestic product isn’t as high as other Central Asian countries – Uzbek figures put it at about 20%, while the International Monetary Fund puts it at about 41% – but it’s growing. And paying down foreign debt becomes more difficult when the value of the currency used to pay it drops. The silver lining is Uzbekistan’s reserves, which exceed its total foreign debt.

Compounding these problems are the struggling currencies of Uzbekistan’s top sources for remittances. Remittances, particularly from Russia, are an important source of income and foreign exchange in Uzbekistan. In the first half 2018, the country received roughly $2.3 billion in remittances – 77% from Russia, 6% from Kazakhstan and 4% from Turkey, all countries with declining currencies. As the value of their currencies fell, so too did the value of remittances from Uzbek workers abroad.

Uzbekistan has one of the highest GDP growth rates of all post-Soviet states (5.3% in 2017). It owes its relative fortunes to government spending, capital investment and Russian remittances, which totaled $3.9 billion last year. But it has many challenges with which it must contend, including the wide use of the US dollar in economic transactions, high government lending, limited institutional development, corruption and high inflation. And it will need even more foreign currency to pay off its debts and purchase imports as its own currency slumps.

Uzbekistan’s currency problems have regional implications too. Other Central Asian countries will be watching Uzbekistan’s liberalization project as they, like Uzbekistan, transition to market economies. They will need to find ways to fund their own reforms. They are aware of the failings of foreign debt. They too are dependent on remittances and loans from international organizations. If Uzbekistan’s currency collapses or its economy buckles under the strain of reform, other countries may think twice before doing the same.