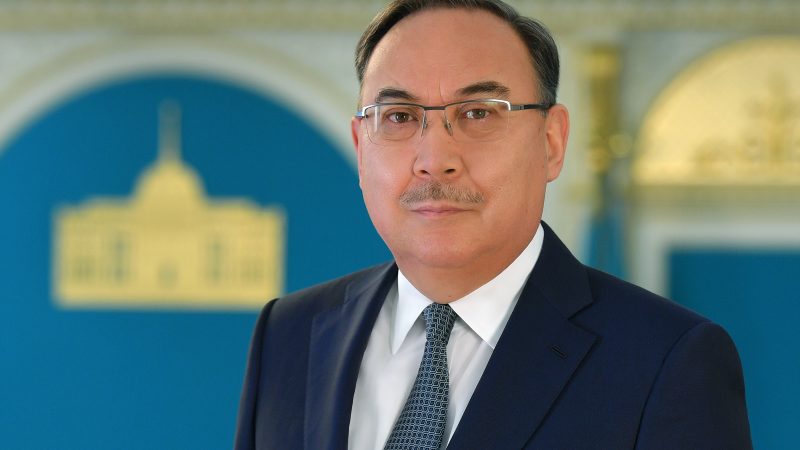 Yerzhan Kazykhan. [Mission of Kazakhstan to the EU]

It was deeply disappointing that the European Parliament adopted a resolution on the tragic events in Kazakhstan in the first days of January, which did not reflect the real situation on the ground, writes Erzhan Kazykhan.

The author is the deputy chief of staff of the president of Kazakhstan and special representative for international cooperation.

Last month, Kazakhstan – a country known for its stability and economic prosperity – had to face the darkest moment of its modern history. “Tragic January” events shocked my nation and the world.

Peaceful demonstrations in Kazakhstan, which the law enforcement did not interfere in, were hijacked by domestic and foreign perpetrators with intent on wreaking havoc and destabilizing our country.

As the investigation by Kazakhstan’s law enforcement unfolds, it appears that this may have been an orchestrated act of aggression. Violent mobs rejected attempts to engage in dialogue and ignored the fact that the government met the demands of the initial peaceful protesters. Instead, the well-organized criminals resorted to militant tactics in 11 regions of the country.

They attacked police officers, National Guard members, as well as first responders, including medical emergency teams and firefighters using firearms and Molotov cocktails. It was direct assault on our statehood and an attempt to undermine the constitutional order, which has been a mainstay of our country for over thirty years.

Horrifically, at least 227 people died during these tragic events. Some of them were armed bandits who participated in the attacks. 19 police officers and military personnel also perished.

Regretfully, civilians also became victims to these acts of terrorism. Currently, about 4,600 affected people have been identified of whom 4,353 were wounded, including 3,393 law enforcement personnel.

More than 1,400 businesses were destroyed, and more than 100 trade centers and banks were looted. Over 500 police vehicles were burned and 5,000 were hijacked. The economic damage amounts to approximately 2.5-3 billion US dollars.

It is crucial to differentiate peaceful protesters from bandits and terrorists. Those who committed serious crimes will be punished in accordance with the law. As for the others, President Kassym-Jomart Tokayev instructed the Prosecutor General’s Office to establish the nature and liability of their offences. Punishments will be mitigated if there are no aggravating circumstances.

Kazakhstan has repeatedly expressed its commitment to the rule of law. All our actions are in accordance with our Constitution, our laws and our international commitments.

We completely understand the concerns of some of our own citizens and the international community about holding a transparent and objective investigation of these tragic events. In his statements President made a clear assurance that the investigation is being held objectively and the results will be shared publicly.

In these difficult times, we hope that our European partners remain supportive, withhold from quick conclusions and wait for the results of the official investigation.

In this regard, it was deeply disappointing that the European Parliament adopted a resolution on the events in Kazakhstan, which did not reflect the real situation on the ground. The document diminished the existential threat that Kazakhstan faced and confused peaceful protesters with violent extremists.

Genuine protesters and demonstrators in a democratic society do not engage in violent attacks which result in severe destruction of properties and killings of law enforcement officers and civilians.

The perpetrators of the violence in Kazakhstan were not ordinary protestors – their actions, including targeted destruction, demonstrate the sophisticated level of coordination and long-term planning with the goal to assault our statehood, create a zone of controlled chaos and, ultimately, forcefully seize power.

The resolution of the European Parliament was therefore based on a lack of comprehension of the situation that Kazakhstan was facing. Perhaps international media is a culprit here, as several publications completely misinterpreted President Tokayev’s “shoot without warning” order. Kazakhstan’s authorities did not use and will never use lethal force against peaceful protesters.

The “shoot without warning” order was related only to armed terrorists. That is clear if you read his statement attentively enough, namely the sentence preceding the order’s announcement. Its aim was to enable law enforcement personnel to defend themselves and our citizens from armed militants, who were shooting and killing indiscriminately.

Prior to this order, our law enforcement did not use any lethal force against the protesters and the violent mob. Kazakhstan, like any other country, has the right to defend its state.

Realizing the scale of the unfolding attacks, on 7 January President Tokayev formally asked the Collective Security Treaty Organization to provide temporary assistance in protecting government and military sites, as per articles 2 and 4 of the CSTO Treaty, as well as article 51 of the UN charter.

Peacekeeping troops from all CSTO countries were deployed. Once the situation stabilized, the CSTO withdrew from Kazakhstan by 19 January.

Since taking office in 2019, President Tokayev initiated the implementation of four packages of political and economic reforms. Following the tragic events, he announced new initiatives to address the genuine grievances of the public and ensure long-term prosperity of our citizens.

Regarding our multi-vector foreign policy, President Tokayev recently declared that “Kazakhstan always remains open to multifaceted cooperation with the international community. We will continue to strengthen close ties with our European partners. Our investment policy of open doors also remains consistent”.

Ultimately, Kazakhstan remains committed to its international obligations and universal principles of human rights and the rule of law. As President Tokayev stated recently, “we will never deviate from the trajectory of further political modernisation”.

We have come a long way over the last thirty years to build our state from scratch. And we will do whatever it takes to protect our democracy and our people from any unlawful interference both at home and abroad.

[Text of the European Parliament resolution of 20 January]