Fallout from Kazakh unrest must not undermine decades of progress 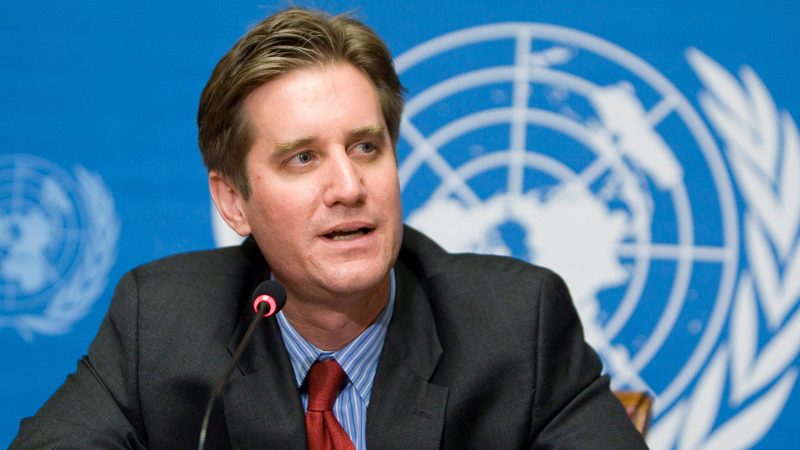 File photo of Matthew Bryza, at the time when he was US Deputy Assistant Secretary of State for European and Eurasian Affairs, at the European headquarters of the United Nations in Geneva, Switzerland, 19 May 2009. [EPA/SALVATORE DI NOLFI]

It is crucial that after the unrest, President Kassym-Jomart Tokayev prioritises the safeguarding of the country’s reputation as a stable country, responsible international partner, and attractive investment destination writes Matthew Bryza.

Matthew Bryza is a senior fellow at the Atlantic Council’s Global Energy Center, Eurasia Center, and Atlantic Council IN TURKEY program. He served as a US diplomat for more than two decades, including US ambassador to Azerbaijan, deputy assistant secretary of state for European and Eurasian affairs, and director for Europe and Eurasia on the National Security Council staff.

As the dust settles on the events of the last two weeks in Kazakhstan, the questions surrounding their causes, and more importantly, consequences, occupy the minds of Central Asia watchers everywhere. In all the uncertainty, however, at least one thing remains clear – in the Government’s efforts to make a break with the past and reform, it can ill afford to sacrifice decades of hard-won progress.

In the 30 years since it achieved independence, I have witnessed Kazakhstan’s transformation from a Soviet backwater to the third-richest landlocked country in the world. As the partner of choice for everyone from Washington to Beijing and in between, I saw its famed multi-vector diplomacy in action under the stewardship of first President Nazarbayev and a circle of visionary bureaucrats, which included surrendering what was the world’s fourth-largest arsenal of nuclear weapons when the Soviet Union collapsed in 1991.

By carefully balancing its relations with Beijing, Moscow, Washington and Brussels while prioritising its sovereignty and strategic interests, Kazakhstan cemented itself as an attractive destination for foreign investment in the Greater Caspian region, raking in over $380 billion over this period and emerging as an increasingly influential voice at the international level.

However, for all the progress on the economic front, domestic political reforms have not been as forthcoming. Kazakhstan remained tightly controlled under Nazarbayev, prioritising domestic stability over potentially risky experiments with multiparty democracy. This meant stifling independent voices within the media and civil society, especially among human rights defenders and democracy activists. As power and wealth accrued at the centre, a class of wealthy oligarchs emerged within and outside the country, while ordinary Kazakhstanis grew increasingly disillusioned. Local maladministration, rising inequality, environmental degradation, and rampant corruption fed growing grievances across society. Something eventually had to give.

The world thought it did in 2019, following the surprise resignation of Nazarbayev and the unexpected selection of a technocrat as his successor. Kassym-Jomart Tokayev, a gentile and erudite career diplomat, known more for his soft-spoken charm than his political chops, was handpicked by Nazarbayev to lead the country through a sensitive period of reform while sustaining the gains made in the previous decades.

On the surface, the transition appeared seamless, almost too good to be true. Tokayev followed up promises of change with clear steps in that direction, albeit beneath the remote shadow of ultimate power, Nazarbayev.

These included phasing in political reforms to enhance competitiveness and transparency in the political system, diversifying the economy away from its dependence on hydrocarbons towards renewables, enshrining greater rights for women in legislation, and abolishing the death penalty. When participating in meetings with Tokayev during my time in the foreign service, he always struck me as an intellectual and committed professional rather than a political operator, but his performance as president was looking more believable by the day.

That was until two weeks ago, when protests over the doubling of liquified petroleum gas prices in far western Kazakhstan almost instantly spread across this vast country, throwing the system and everyone in it, including Tokayev, into flux. Suddenly, I did not recognise the man.

From the announcement of a brutal crackdown on civilian protestors to the appeal to Russia and the CSTO it leads to intervene in Kazakhstan’s internal affairs, the president seemed to overreact, even panic, jeopardising the country’s reputation and record.

In particular, the illogical and ludicrous charges of treason against Karim Massimov, a two-time former prime minister, are a complete misnomer.

Massimov, until recently the head of the Kazakhstan’s intelligence services, was one of the country’s chief modernisers and a key transmission belt that facilitated Tokayev’s own transition into the presidency.

For anyone who knows Kazakhstan, Massimov is no traitor to the republic. A genuine advocate for scientific and social progress, he dedicated his career to the vision of Kazakhstan as a more progressive country and a balancing point among the world’s great powers.

As any Western official who has worked with him can testify, Massimov evidenced no higher political ambition and instead relished his role at the operational apex of Kazakhstan’s transition from the Nazarbayev system to something new with President Tokayev at the day-to-day helm.

Massimov, therefore, had no cause to risk it all in the name of revolution, which makes his arrest and accusation of treason feel like a move in an ominous direction.

So now what? As CSTO troops leave Kazakhstan and the dust settles on the sad events of the last two weeks, Kazakhstan’s friends hope that President Tokayev will pause and rethink his next steps.

It is crucial that Tokayev now prioritises the safeguarding of the country’s reputation as a stable country, responsible international partner, and attractive investment destination.

He can succeed by toning down the rhetoric of phantom external terrorist threats for the sake of national healing. Hopefully, he will now live up to his own record as a seasoned diplomat and man of principle leading a national reform effort to build a Kazakhstan that is independent, where basic human rights norms are honored, and where due process of the law provides for the sense of justice that is the foundation of stability in any country.

In Kazakhstan’s context, progress has been hard-won. Let us hope that the decisions to come do not mean it will be easily lost. The world watches and waits.