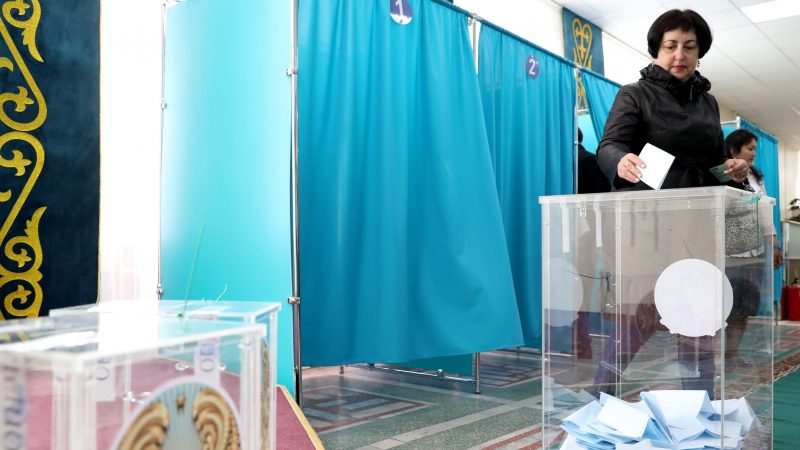 File photo. A Kazakh woman casts her vote at a polling station during the presidential elections in Nur-Sultan (formerly known as Astana), Kazakhstan, 9 June 2019. [Igor Kovalenko/EPA/EFE]

The Parliamentary Elections in Kazakhstan to be held on 10 January 2020 should be anticipated with confidence despite the Covid-19 concerns, writes Jeroen Jansen.

Jeroen Jansen is a former Dutch diplomat. He was previously posted to the Netherlands Mission to the OSCE in Vienna and in that capacity has been actively involved in election activities. Based in Brussels, he currently advises on international relations with focus on EU Law and Policy.

The preparations for the parliamentary elections in Kazakhstan are in full swing. On 10 January 2021, Kazakhstan will elect the members of the “Mazhilis”, the lower-house of the Kazakh Parliament. The current members of the parliament were elected in 2016 for a five-year term. Of the 107 members, 98 are up for election. Another 9 members will be nominated by the Assembly of People of Kazakhstan – a national body that ensures the multi-ethnic participation in Kazakh politics and civil society.

It is laudable – yet not without some challenges – to hold these elections as scheduled and in line with the Kazakh constitutional and legislative requirements. This will ensure democratic processes to continue and further develop.  At the same time, extra efforts will be necessary to ensure that the elections can be held in a safe environment, mindful of justified Covid-19 public health concerns at – and around – voting stations. Therefore, it is re-assuring that the government and administration will apply strict protective measures. Wearing face masks, ensuring social-distancing, issuing of personal protective equipment and regularly disinfecting polling stations, combined with monitoring and oversight will certainly help.

These parliamentary elections are the first elections since President Kassym Tokayev took office as President of Kazakhstan in May 2019, succeeding First President Nursultan Nazarbayev. In the past, international observers – including from the Organisation for Security and Co-operation in Europe (OCSE) – have made recommendations to further develop the democratic processes around elections. Beyond election processes, also other efforts to further develop democratic principles were considered opportune. The government recognised this and acted to further strengthen the democratic processes on institutions and procedures around the country. A range of reforms was considered and implemented.

As point of departure, President Tokayev introduced the concept of the “listening state”, aiming at activating public opinion as part of the policy-making process in Kazakhstan. As concrete measure, the “National Council of Public Trust” was established. The latter body operates as an advisory body under the President and facilitates an open societal dialogue to consider specific proposals and reforms of the public administration. It has an active and diverse agenda. During its 4th session in October 2020 the Council e.g. considered that the information on the work of the government authorities should become more transparent. Environmental issues were of special attention as well. Experts offered to develop the national program of sustainable growth, modernize the banking sector and apply more effort to solving housing and employment issues. These efforts should be supported and appreciated. Popular participation is of great importance in democratic societies. It cements the relationships between government and administration, and the citizens and society more generally. In Kazakhstan this is also of great importance in view of the rich multi-ethnic and religious make-up of its society. This diversity is cared for and protected by the Constitution of the country.

Additional reforms were also considered and implemented. Reforms that have a direct impact on the upcoming parliamentary elections.  A few are worth considering.

In a democratic society the electorate needs “choice” – different options to vote for. Therefore, a range of established political parties and candidates is required. This was recognised in Kazakhstan at multiple occasions and confirmed by the government, most recently in October 2020 during the State of the Nation address in which President Tokayev confirmed the commitment to encourage the development of a healthy multi-party system. He noted the importance of a competitive political environment in building a modern, effective and stable state.

In that context it is encouraging to see that the threshold for registering a political party has been reduced from 40,000 to 20,000 members, making it easier to establish a new party.

Another feature, that is both innovative and empowering for underrepresented segments of society in political processes, is the introduction of 30% quota for women and young people under the age of 29 in the political party registration lists.

And of course, freedom of expression and assembly are key ingredients of democratic processes. It will be interesting to see how the new Law on Peaceful Assemblies will be implemented. It allows public spaces around Kazakhstan to be used for peaceful assemblies and reduces the number of days for notification of an assembly from 15 to 5 days.

The countdown to the elections has started. The date of 10 January 2021 is approaching swiftly and 6 political parties have indicated to participate in the elections, including the leading Nur Otan party. It might take another term of legislature to see the benefit of ease of registering a new political party. The process of forming a party, consolidating political positions and consequently growing political diversity, takes time.

Election monitors will be present during the elections. Among others, the OSCE – following the invitation by Kazakhstan – has meanwhile deployed a “limited observation mission”. On election day, The OCSE team will join efforts with a delegation from the OSCE Parliamentary Assembly. There will be reports on the overall election process and the way in which the elections are conducted.  Taking into account the concept of the “state that listens” as propagated by President Tokayev and the Government of Kazakhstan, the elections should be anticipated with confidence in good and ever improving process.