The Brief – ‘Business as usual’ with Kazakhstan? 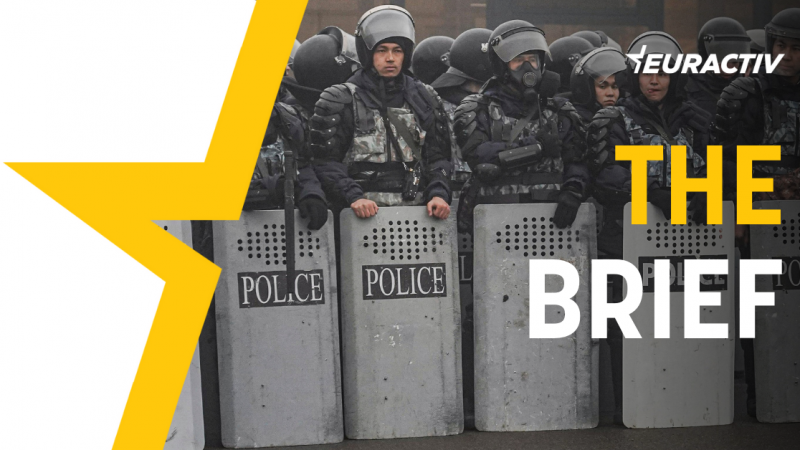 The new year started with unrest in Kazakhstan, which will likely impact the wider picture of world geopolitics.

The unrest was surprising because the Central Asian country had been a symbol of stability, and this image had helped attract hundreds of billions of foreign investments.

This stability was primarily the result of a foreign policy in which Kazakhstan built friendly relations with major players – and all countries in general.

Ten years ago, the country had problems with Islamic fundamentalism, which has reportedly been kept under control since. In terms of internal stability, the regime in Nursultan was experimenting with controlled democratisation, in which, it appears, there was more control than democratisation.

Living standards have improved during 30 years of independence from the Soviet Union, but evidently not enough. Corruption and cronyism exacerbated the situation. It is particularly difficult to accept a price hike from a company owned by the former president’s family.

For a country so rich in energy to be destabilised by energy prices sounds nothing short of crazy.

From the Western perspective, the protests were against authoritarian rule and low living standards.

The battered regime in Nursultan says the peaceful protests were hijacked by terrorist, extremist, and criminal groups trained abroad and with combat experience from Islamist groups. However, they fell short of spelling out who they are, where they are from, and who is financing them.

In following the developments, it is also helpful to remember that Kazakhstan’s regime has political opponents living in exile in France and Belgium.

Russia, for its part, was quick to send troops under the Collective Security Treaty Organization (CSTO) terms, of which Kazakhstan was a willing signatory.

To survive, the regime in Nursultan obviously needed Russian help. Internal dissent was evident at all levels, judging by the sackings of various high-level officials. Overall, Russia’s influence, which has been strong in Kazakhstan before, will now only increase.

However, this does not mean that Russia is happy about the development. The unrest occurs when the Kremlin is heavily focused on the crisis around Ukraine, and this distraction is not helpful.

Moreover, for the Russian public, developments in Kazakhstan can be interpreted as a signal that something similar may happen in Russia itself. The perceived stability of authoritarian countries is treacherous.

This is bad news for Vladimir Putin, who may have thought that the Nazarbayev way –  to step down from power but remain THE respected leader – is a model for him to follow.

China doesn’t like such unrest either. The stability of Kazakhstan, sometimes called “the buckle of the Belt-and-Road”, is vital for China.

The unrest in Kazakhstan has triggered low key reactions from Washington. At present, the US has no interest in being seen or accused of fomenting further colour revolutions in the former Soviet republic.

The EU, which collectively is the largest investor in Kazakhstan, made noises suggesting it may consider some measures in reaction to the violent crackdown on peaceful demonstrators.

But precisely because of the economic stakes, punitive measures are unlikely. The EU likes to mediate – but in this case, it’s not clear with whom, especially if the unrest will be used to put the regime’s opponents in jail.

The unrest in Kazakhstan will mainly impact the region, in which the country used to play a stabilising role and spearheaded regional cooperation.

Does Kazakhstan’s current leadership, which gave the shoot-to-kill order, still have the authority to play an international role?

Kazakhstan is also the buckle to Central Asia. No matter what will happen, the developments in Kazakhstan are likely to inspire the leaders of other Central Asian countries toward more control of their populations rather than toward democratisation.

Business with Kazakhstan will continue. Whether it will be “business as usual” is another matter.

Brexit minister Liz Truss on Sunday (9 January) resumed the UK government’s sabre rattling with Brussels, warning that she was prepared to suspend the Northern Ireland protocol, and potentially collapse the UK’s trade pact with the EU. “I want a negotiated solution, but if we have to use legitimate provisions including Article 16, I am willing to do that,” Truss wrote in the right-wing Daily Telegraph.

The EU’s green finance taxonomy is about more than climate finance, it’s also an opportunity to improve our health and well-being by phasing out polluting chemicals, write Timothy Suljada and Charlotte Wagner.

The European Union will need to invest €500 billion in new generation nuclear power stations from now until 2050, the bloc’s internal market commissioner said in an interview published at the weekend. “Existing nuclear plants alone will need €50 billion of investment from now until 2030. And new generation ones will need €500 billion!” Thierry Breton told the Journal du Dimanche newspaper.

Europe’s healthcare systems are being strained once again by the rapid spread of the Omicron variant of the coronavirus over the holiday period, with large numbers of key staff ill or self-isolating and experts predicting the peak of infections is yet to come. Despite early studies showing a lower risk of severe disease or hospitalisation from Omicron compared to the previously-dominant Delta variant, healthcare networks across Spain, Britain, Italy and beyond have found themselves in increasingly desperate circumstances.

Cypriot Foreign Minister Nikos Christodoulides said on Sunday (9 January) he had tendered his resignation, in an internal power struggle within the ruling right-wing conservatives on their candidate for presidential elections in 2023. Christodoulides, appointed in March 2018, has long been viewed as harbouring presidential ambitions, causing friction within his own Democratic Rally party. On Friday party leader Averof Neohytou, who is seeking his party’s nomination in the presidential race, urged Christodoulides to clarify his intentions.

Germany-led G7 can boost decarbonisation together with climate justice, write Andreas Goldthau and Simone Tagliapietra. Science has made abundantly clear that to avoid the most dramatic consequences of climate change, humanity needs to keep the global temperature increase within 1.5°C. But while COP26 has raised climate ambition, the world remains on track for a 2.4°C increase.

Several thousand protesters marched in Brussels on Sunday (9 January) to oppose anti-coronavirus regulations, as European governments mull tighter rules in the face of the omicron wave. There was no repeat of the violence that had marred previous, larger demonstrations in the Belgian capital, although police intervened to surround a small group that approached the EU headquarters.

The Conference on the Future of Europe (CoFoE), involving citizens in EU policy-making, is in the middle of its journey. It is already possible to assess the successes and limits of such deliberative democracy experiments and to question whether it can be a replicable exercise for the future.