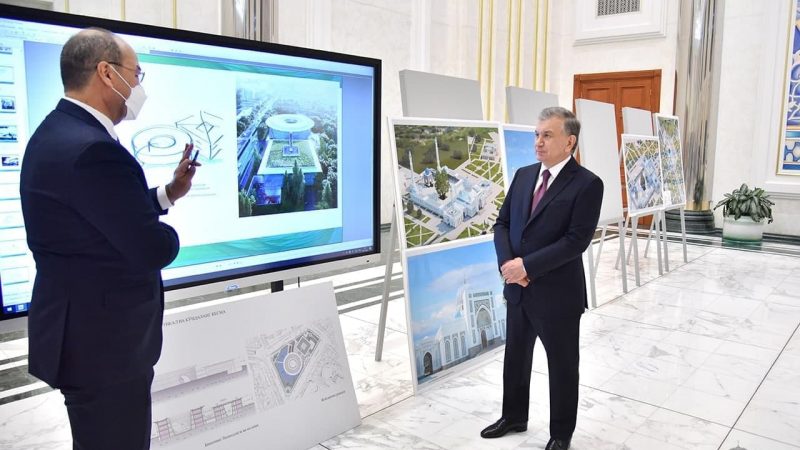 At a presentation, the President of Uzbekistan [C] discusses with executives a range of construction projects due in capital Tashkent, in Samarkand and Surkhandarya regions. [Twitter account of President Shavkat Mirziyoyev]

A recent deal stands out because it is the first fully privately financed project in the Uzbek energy sector and also the largest EU private sector investment in Uzbekistan, writes Alberto Turkstra.

Alberto Turkstra is a project manager at Diplomatic World Institute.

The recent announcement of a $1.2 billion deal between Uzbekistan’s Ministry of Energy and Dutch-registered company Stone City Energy for the construction of a Thermal Power Plant (TPP) in the Surkhandarya Region in South-East Uzbekistan, is significant in many ways.

Stone City Energy will be responsible for designing, financing, building, commissioning, operating and managing the 1,560 MW power plant for a period of 25 years and employ the latest technologies manufactured by Siemens Energy. This power plant will increase the stability, reliability and robustness of the national grid and create over 2,000 jobs.

This deal stands is an important milestone for the foreign investment community and living proof of the economic opening in Uzbekistan and the resulting stable and reliable investment climate, with energy as one of the most attractive sectors.

Statistics speak for themselves: Uzbekistan is radically climbing up in the statistical indexes on investment climate.

From being ranked 87th in 2016 in the World Bank’s Doing Business Report, Uzbekistan has improved to position 69th by 2020, ranking particularly well in sub-categories such as “starting a business”, “protecting minority investors”, and “contract enforcement” – all areas that investors carefully look at before deciding to enter a market, in addition to political stability and strong rule of law.

Uzbekistan is the largest electricity producer in Central Asia – with total installed capacity exceeding 12 GW – and energy consumption is expected to double in the next decade, requiring $26 billion in investments and an additional 17 GW of generation capacity to meet this goal.

However, the electricity generation infrastructure is ageing and inefficient and almost exclusively based on natural gas. The ageing power grid results in high transmission and distribution losses. Uzbekistan is one of the most energy-intensive economies, as measured by energy intensity per unit of GDP.

The average efficiency of thermal power plants is in the range of 28 – 33%. A significant part of the distribution lines and power plants was built during the Soviet era, and these are now in urgent need of upgrading and replacement.

In this context, the Uzbek government has, since 2019, implemented a large-scale transformation and liberalization of its energy sector with the overarching objectives being the dismantling of monopolistic practices, creating a conducive environment for private sector participation and a more favourable regulatory framework for foreign investors.

One of the key institutional innovations worth highlighting in the overhaul of the energy sector is the development of the country’s first Public-Private Partnership (PPP) Law, including the setting up of a dedicated PPP agency. In 2019, the IFC assisted the Government of Uzbekistan to structure and implement the first-ever PPP project in the energy sector.

The project was awarded to UAE-based Masdar Clean Energy for the construction of a photovoltaic (PV) farm near Navoi City.

In 2019, the Uzbek government furthermore decided on the unbundling of Uzbekenergo, the state-owned power utility providing electricity for Uzbekistan with a legally endowed monopoly in charge of electricity generation, transmission, and distribution.

Uzbekenergo had struggled to meet the fast-growing power demands and in 2017 made losses worth USD 840 million (absorbed by the government). In the framework of the restructuring of the energy sector, in 2019 the Ministry of Energy was formed to “develop and implement a single state policy in the Oil & Gas and Power industry aimed to ensure the country’s energy security”.

The establishment of an independent energy regulator (in charge of electricity and natural gas) is also expected in the near future, which will be subordinate to the President and the Parliament.

To this end, several frameworks, decrees and strategies have been implemented including (1) Strategy for the Transition to a Green Economy for the 2019-2030 Period, (2) The concept note for the supply of electric power 2020-2030, (3) A Low-Carbon Road Map for the Power Sector in the Republic of Uzbekistan until 2050, developed with the support of the EBRD and the Government of Japan exploring the feasibility of a carbon neutral electricity generation sector in Uzbekistan by 2050.

Common themes in these documents are the need to increase Uzbekistan’s power generation capacity; increase the efficiency of power generating assets; and the overall greening of the sector through the expansion of renewable sources of energy.

According to the roadmap’s key performance indicators, until 2030 Uzbekistan needs to build 8 GW of new renewables capacities and modernise 10 GW of existing natural gas capacities.

By 2030, it is envisaged a general reduction of greenhouse gas emissions per unit of GDP of 10% from the levels of 2010 (as outlined in the country’s Nationally Determined Contribution dating from 2017) and a twofold increase in energy efficiency.

By 2030, the country’s reliance on natural gas should reduce from 76 to 50% and renewable energy sources should by then account for at least 25 per cent of the total volume of electricity generation in Uzbekistan.

Gradually, regulatory and institutional reforms will enable the development of renewable energy sources in Uzbekistan, mobilizing investments from domestic and international players and taking advantage of the fact that the cost of wind and solar technologies has reduced sharply during the last decade.

At this point, it is worth mentioning the country’s new investment law of 2019 which retains several of the guarantees and incentives provided by previous law dating from 1998, such as non-discrimination, non-interference from state bodies, transfer and repatriation of funds, protection against nationalisation and against adverse changes in legislation.

On top of this, it also introduces new investor support mechanisms such as investment tax credit and subsidies. The law assigns the Ministry of Investment and Foreign Trade the role of “one-stop-shop” for foreign investors in order to reduce communication channels with multiple state bodies.

In conclusion, a reliable and affordable electricity supply is fundamental for driving forward economic growth and pushing Uzbekistan to the next stage of its development.

The announcement of the TPP in the Surkhandarya Region as the first fully private investment in Uzbekistan’s energy sector is evidence that comprehensive reforms initiated by President Shavkat Mirziyoyev are starting to bear fruits.

This project, in short, shows the way forward for the Uzbek energy sector.