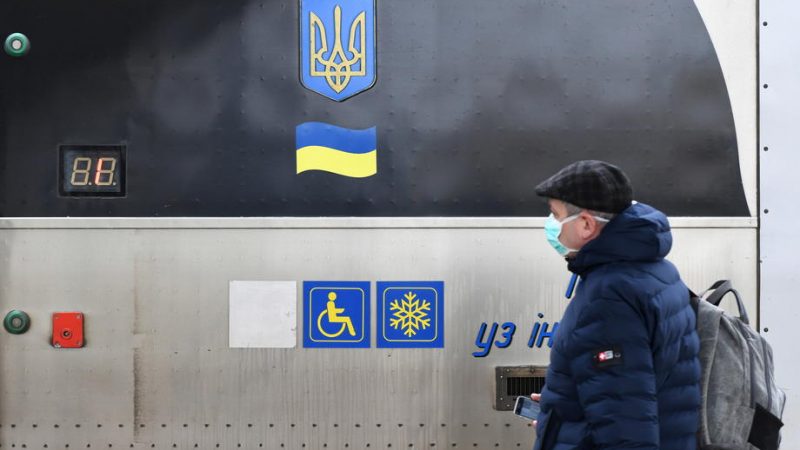 A man wearing a protective face mask is about to board a Ukrainian train at the railway station in Przemysl, Poland, 20 March 2020. [EPA-EFE/DAREK DELMANOWICZ]

One of the reasons behind the recent rapprochement between Ukraine and China is related to the transformation of Ukraine into one of the gate countries of the Belt and Road Initiative, writes Yunis Sharifli.

Yunis Sharifli graduated with a Bachelor of Arts degree in International Relations from the Azerbaijan State University of Economics in 2020. At the moment, he is studying at the University of Bologna for his Master’s Degree.

In July, China and Ukraine signed an agreement to strengthen their cooperation towards building their respective infrastructure sectors. In the same month, the President of Ukraine, Volodymyr Zelenskyy, had a phone conversation with the President of the People’s Republic of China, Xi Jinping.

In this conservation, Zelensky said that Ukraine might become a “bridge to Europe” for Chinese investments. A direct container train from China to Ukraine via Mongolia and Russia first started in June 2020 and the first Ukraine export train to China started on 7 October 2021.

Main Motivations of China and Ukraine

Both China and Ukraine have a wide range of interests related to strengthened infrastructure and China-EU connectivity through Ukraine. In terms of China’s interests, two main factors are dominant. First is the recent crisis in Belarus, a gate country for China-EU connectivity, which prompted China to find an alternative route for the northern corridor of the Belt and Road Initiative (BRI).

EU sanctions against Belarus due to the aircraft crisis have strengthened doubts about the future stability of the northern corridor of the BRI.

Finally, because of the migration crisis between Belarus and Poland, the latter declared a state of emergency along the Belarus border. This situation caused further deterioration of Belarus’ transit capabilities because of lengthy customs procedures, security checks and the need to meet different rail gauge standards all causing a massive waste of time.

As the result of both cases of Belarus and Lithuania, China is interested in diversifying the northern corridor of BRI through Ukraine for saving future the stability and sustainability of this corridor. Furthermore, by the way of the Ukrainian route, China has a chance to improve its trade and economic relations, not just in western European countries but also central European countries.

In terms of Ukraine’s interest, firstly, promoting connectivity between China and the EU may help Ukraine strengthen its position vis-à-vis Russia and the EU and help to follow a balanced and multi-vector foreign policy. Secondly, becoming a major transit country and exporting goods to China would contribute to the Ukrainian economy.

Finally, Ukraine has a chance to securitize its land against Russia by the way of becoming a major transit country between China and the EU.

Despite Zelensky’s willingness to transform the country to bridge between China and the EU, there are both political and technical problems that create challenges for Ukraine.

Secondly, strained relations between Russia and Ukraine also create doubts about the stability of Ukrainian routes. For example, after 2016 the Russian government’s decision to block rail transit from Ukraine to Central Asia shows how volatile and unstable relations between two countries are.

Thirdly, due to the strategic partnership between China and Russia, China has limited opportunities to improve its relations with Ukraine in terms of economic and infrastructure development cooperation.

Finally, the strengthening perception of the “China Threat” in both western and eastern European countries, and the crisis in the 17+1 platform may create a range of problems for Ukraine in managing its relations with China and may result in pressure from EU to abandon the connection.

In addition to political reasons, there are also different technical and economic reasons that create a range of problems for Ukraine.

Firstly, insufficient and old infrastructure prevents Ukraine from using its geographical position. In the long run, the state needs to invest and develop its railway system and capabilities.

Secondly, the fact that Ukraine is not a member of the Eurasian Economic Union like Belarus means that trains spend much more time at the Russian border than Belarus and have to go through different bureaucratic procedures.

Thirdly, Ukraine’s unstable business and political environment also discourages Chinese companies from investing. Finally, as with other routes, this route also needs subsidies in the short and medium-term, but due to Ukraine’s problematic business environment and different technical problems, which were mentioned above, there is no guarantee that Chinese provincial governments will subsidize this route.

Moreover, any crisis with Russia may lead to delays at the border. The possibility of a delay is a major problem for Ukraine because supply chains are based on the principle of just-in-time and if companies cannot calculate arrival times, they will be reluctant to invest or subsidize routes.

To sum up, despite Zelensky’s willingness to transform the state into a new transport hub or a new bridge for China and EU trade, there are too many political and economic obstacles.

In the short and medium-term, Ukraine does not stand a chance to be the main transit country between China and the EU. Instead, a new route through Ukraine could play a complementary role for BRI’s northern corridor, instead of replacing the old routes.