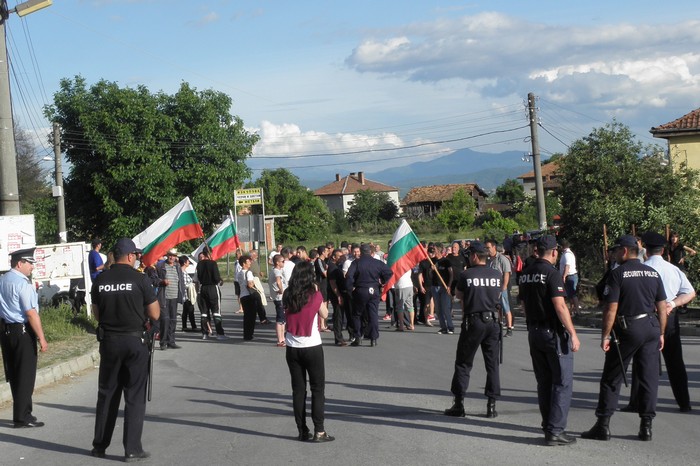 “I call on everybody to be careful and not to play with fire… It is very easy to spark an ethnic conflict,” Boyko Borissov told journalists, adding there was already “huge instability”.

“I speak as a fireman. It’s easy to light a fire, but its’ difficult to extinguish it,” said Borissov, who was a fireman in his youth. He made the comments following a meeting with Regional Policy Commissioner Corina Cre?u, who is on a visit to Bulgaria.

Hundreds of people in Sofia’s Orlandovtsi neighbourhood have staged daily anti-Roma protests since Sunday, after seven youngsters were injured in a fight between locals and Roma.

According to reports, the fight took place after ethnic Bulgarians asked a group of four Roma men to reduce the volume of music they were playing from a car they had brought inside a public park.

Instead, the Roma brought reinforcements and assaulted the ethnic Bulgarians with axes, injuring some of them and threatening that they will regret it if they complain.

Four men have been charged with hooliganism and some 70 people –protestors and Roma — have been arrested in the past two days.

“We have nothing against the Roma from our area. But there are gypsies coming from the country who harass our girls, attack our boys and steal from our houses,” protester Petar Ivanov, 52, told AFP.

Tensions have also been running high in the southwestern town of Garmen for several weeks. with locals protesting Roma houses built without permission.

>>Read: Roma integration: The EU has a role to play

Bulgaria’s 700,000-strong Roma minority have long lived on the fringes of mainstream society, with below-average levels of education, employment and health care.

Experts say that this latest upsurge in tensions in the European Union’s poorest country is linked in part to the opposition, and ultra-nationalists, stirring up tensions ahead of local elections in October.

Dnevnik, the EURACTIV partner in Bulgaria, reported that most political parties represented in parliament have denied being linked to the protests.