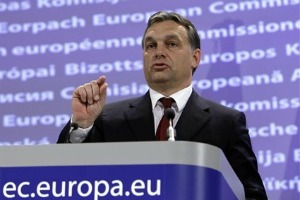 According to the Wall Street Journal, Barroso was referring to the Hungarian government's plans to reshape the structure of the central bank by designating a third deputy governor and also raising the number of members in the Monetary Policy Council.

The newspaper quoted National Bank of Hungary Governor András Simor as saying that these elements of the legislation could serve no other purpose than to increase government influence on monetary policy.

The Commission has serious doubts about the compatibility of the Magyar Nemzety Bank (Hungarian National Bank) bills with Article 130 of the Lisbon Treaty on the independence of the European Central Bank, Hansen said. She added that Barroso also expressed his regrets that the last drafts of these laws were not subject to prior consultation with the ECB, which had repeatedly expressed its concerns.

Article 130 says that neither the ECB nor a national central bank, nor any member of their decision-making bodies, shall seek or take instructions from Union institutions, bodies, offices or agencies, from any government of a member state or from any other body.

Barroso wrote to Orbán that if national laws are incompatible with EU legislation, they would need to be changed, Hansen said. She added that Barroso advised the Hungarian prime minister to withdraw the two bills in question from Parliament and to work with the EU institutions so that they are compatible with EU law.

According to the Hungarian website Origo, Barroso asked Orbán to withdraw the legislation on the central bank as well as a 'stability law' proposed earlier this month to tie the pace of debt reduction to economic growth.

"I would forcefully advise you to withdraw two pieces of cardinal law now in front of parliament," Origo.hu, which said it saw the letter, reported Barroso as writing.

Origo.hu also cited Barroso as saying Hungary's economic problems were largely of its own making.

"Hungary's financial and economic problems can primarily be traced back to domestic political decisions and measures, therefore a potential programme must contain solutions accordingly," Barroso wrote to Orbán.

He stressed, however, that he was not going to give anyone "a free hand" in limiting his country's economic sovereignty.

In April 2010, Hungarians voted overwhelmingly for a radical change, sending the ruling Socialists into opposition and giving the centre-right a qualified majority in parliament.

The election marked the biggest victory for any political party in a general election since the fall of communism 21 years earlier. However, several measures put in place by the new government have since fuelled controversy.