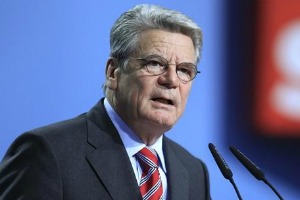 Joachim Gauck, a former anti-Communist human rights activist in East Germany, is set to become the next German president – the third in less than two years – following the resignation on Friday of Christian Wulff amid accusations of impropriety.

Chancellor Angela Merkel agreed yesterday (19 February) to support Gauck, 72, an opposition-backed candidate in 2010. Merkal chose Wulff at the time, but in recent months he has has been dogged by allegations involving financial favours.

Merkel aims at averting a fight with opposition parties that might have distracted her from tackling the eurozone crisis. Berlin is spearheading European efforts to save Greece from a chaotic default and Merkel cannot afford to be distracted by domestic political fights, German commentators said.

The announcement paves the way for Gauck, a Protestant pastor who was a leading figure in the peaceful protest movement that led to the fall of the Berlin Wall, to be confirmed in the ceremonial post by the Federal Assembly in the coming weeks.

"Let's not forget that it was churchmen like Joachim Gauck who helped bring about East Germany's peaceful revolution," Merkel, herself the daughter of a Protestant pastor who grew up in the failed German Democratic Republic, told a news conference in the Chancellery in Berlin.

Wulff's departure was a blow to Merkel because she pushed through his election in 2010 despite the fact many Germans and the leading opposition parties wanted Gauck to become president.

By supporting Gauck now, Merkel exposes herself to accusations that she erred in her choice two years ago. But refusing to back him could have unleashed a divisive battle with the opposition Social Democrats (SPD) and Greens that might have been even more harmful.

Gauck was one of a number of pastors who supported the protests that ultimately brought down the East German regime, setting the stage for the reunification of Germany in 1990.

Gauck was 11 when his father was arrested by communist authorities and sent to a Siberian Gulag.

The young Gauck wanted to become a journalist, but his career plans were thwarted because he refused to join communist youth associations. Instead he studied theology.

In 1965, he became a Protestant pastor, using the pulpit to preach on human rights.

He went on to become one of the founders of the New Forum, a civil rights movement formed in 1989 in the months leading up to the collapse of the GDR.

After the Berlin Wall fell, Gauck ran the state-run archives on the Stasi, earning recognition for exposing the crimes of the dreaded East German secret police.

He ensured that the sprawling files were used to root out former Stasi employees and collaborators in public service and to understand the country's past. His commission was unofficially known as the "Gauck authority."

Appearing somewhat overwhelmed, Gauck told reporters he had just landed in Berlin and was getting into a taxi when Merkel called to give him the news.

The opposition SPD and Greens, who nominated him two years ago, argue that he is the ideal person to restore credibility to the office after the premature departure of Wulff and his predecessor Horst Köhler, the former head of the International Monetary Fund (IMF).

With broad support, the Federal Assembly is likely to confirm him as president without a hitch. The Assembly, a 1,244-seat body composed of national and state representatives, must vote in a new president by 18 March.

While the president in Germany has no power over policy, the person in the role has been seen as a source of moral guidance and can influence the political debate by giving speeches.

Chancellor Angela Merkel was criticised in 2010 because many Germans thought her candidate Christian Wulff, a regional politician from her Christian Democratic Union (CDU) with no major accomplishments to his name, did not have the right profile for the job.

This is the second time that a president has resigned during Merkel's governance. On 31 May 2010, Host Köhler stepped down over "misplaced comments" on the country's involvement in Afghanistan.