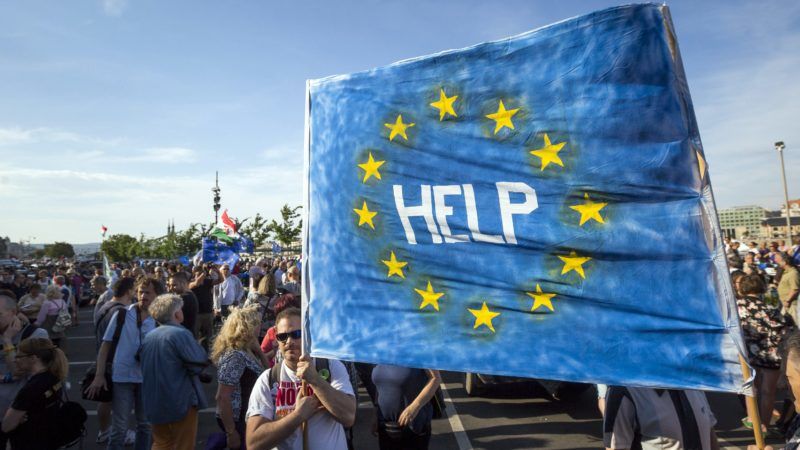 Supporters of the Hungarian opposition during an anti-government protest. Budapest University of Technology and Economics, 21 May. [Balacz Mohai/EPA]

“Hungary thus joins the ranks of countries like Russia, China and Israel, which obviously regard the funding of non-government organisations, of civil society efforts, by donors from abroad as a hostile or at least an unfriendly act,” said foreign ministry spokesman Martin Schaefer.

The new law forces non-government organisations (NGOs) receiving more than €24,000 ($26,000) a year from abroad to register as a “foreign-supported organisation” or risk closure in a move seen as targeting especially US billionaire George Soros.

The new law comes amid a general crackdown on dissent. Prime Minister Viktor Orbán, who has locked horns with Western partners over several issues including the freedom of education, the press and the courts said the NGOs served foreign interests. Orbán faces elections in 2018.

Schaefer said the law “creates the strong impression of seeking to hinder the work of NGOs that are partly financed from abroad” and pledged that Berlin would keep a close eye on its impact on civil society.

“For us in the European Union, freedom of opinion, the widest latitude for the free operation of civil society organisations and their protection, are of very high importance,” he said.

“Freedom, democracy, the rule of law and human rights are not negotiable in Europe.

“These values are the foundation of the European Union. And all, I repeat all, member states have committed themselves to them.”

Asked about the reaction of the EU executive, Commission spokesperson Alexander Winterstein said yesterday that the Commission services are “carefully analysing” the adopted text, in close cooperation with the Venice Commission, the specialised body in constitutional affairs of the Council of Europe.

“We are going to pay particular attention to the compatibility of the law with EU’s internal market rules and the EU Charter of Fundamental Rights”, he said.

Even the US is ‘troubled’

The United States said yesterday it was “troubled” by the Hungarian law that it said unfairly burdened a targeted group of Hungarian civil society organisations.

“Many of (the NGOs) focus on fighting corruption and protecting human rights and civil liberties,” the US embassy in Budapest said in a statement.

“This new law, particularly in the context of government rhetoric portraying civil society organizations receiving foreign funding as acting against the interests of society… will have a chilling effect on the ability of Hungarians to organise themselves and address their concerns to the government in a democratic manner.”

Several NGOs declared a boycott of the law and said they would take the matter to international courts.

NGOs "refuse to obey the new law, on the grounds that it breaches the right to freedom of expression&association" https://t.co/kUErwF3bst

The Hungarian Europe Society, together with numerous NGOs, protested in a statement against the law which it called “stigmatising” and “harmful”.

“We are convinced that the new law is in breach of  Hungary’s Basic Law and many other international treaties ratified by Hungary because  it unjustifiably restricts the right to freedom of association and freedom of expression”, the NGOs state.