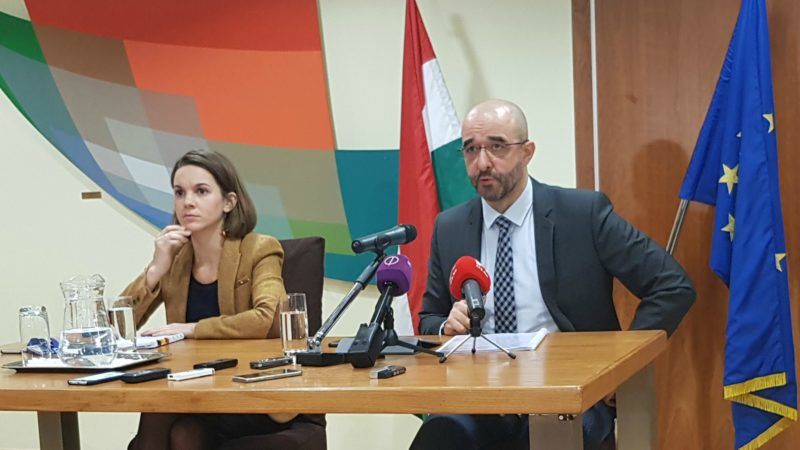 Kovács, a seasoned communicator who appears to enjoy his regular chats with the Brussels press corps, repeated some of the messages from his previous visits. He stressed that Hungary was the first to introduce “working and effective measures on the ground against illegal migration”, meaning a border fence and arrangements with countries on the other side to take back migrants.

“We still believe that what we see is a mass migration crisis, not a refugee crisis”, he said.

The fence, legal measures and reinforced personnel have been able to bring figures of arriving migrants on a daily basis close to zero, Kovács said. Basically, all who try to breach the barrier are apprehended and taken back to transit zones on the other side of the fence, from where they can find legal means to enter the EU, he explained.

Kovács also spoke of the “national consultation” to investigate public views on the “Soros plan”, which according to the authorities in Budapest aims to persuade Europe to accept a million migrants per year and tear down Hungary’s anti-migrant border fences.

Kovács said this seventh national consultation indeed focused on “a fairly unusual aspect”, the Soros plan,” his political scheme how to handle illegal migration”. He said Soros had announced his plan in June 2016 in a “lecture” to the European Parliament.

“What is more important for us is that Mr Soros’ plan is coming back in a number of measures, suggestions, declarations, political intent on behalf of European institutions. The latest such decision, which has been reinforced by parliamentary vote, is the ALDE committee’s suggestion how to renew the Dublin system”, he said.

In the European Parliament, the Commission proposal on reforming the Dublin asylum system was assigned to the LIBE Committee, (rapporteur: Cecilia Wikström – ALDE, Sweden).

Kovács continued: “We have seen elements of this mindset of institutionalizing migration coming also from the Commission and being basically on the agenda of the Council itself”.

The Hungarian official said that the consultation has been very successful.

“We have set a historic high in terms of numbers of questionnaires sent back, over 2.3 million have been sent back so far”, he said, explaining that 99% were sent by mail, but it was also possible to send them online.

“This is a highly successful monitoring of the Hungarian people’s mind, what they think about illegal migration,” Kovács said, adding that the evaluation of the forms would take some more time, but Budapest would be able to announce the exact results before Christmas.

The Hungarian official made reference to recent interviews given by Luxembourg’s foreign minister Asselborn and by Commission President Jean-Claude Juncker, which showed “irresolvable, philosophical difference” between those who wanted to manage and institutionalise migration and Hungary, who wants to stop illegal migration at the borders of Europe.

President Juncker tells Deutsche Welle ahead of the EU–African Union Summit: "Africa has always been a part of our… https://t.co/F56qP4wC3X

“Migration itself is not a contribution to the future of Europe, it’s rather carrying the kind of dangers nobody is keen to talk about”, Kovács said.

The Hungarian official focused on the European Parliament LIBE Committee (Civil Liberties, Justice and Home Affairs) public hearing on the Situation of Fundamental Rights in Hungary.

He said that this was not a novelty, as Hungary has been through some of these hearings in the past. In fact, even Prime Minister Viktor Orbán hasn’t avoided debating with MEPs.

He said Hungary would participate and have its say.

“We don’t even know the issues are, we haven’t seen a proper agenda. Foreign minister Péter Szijjártó is going to be present and will answer all and every criticism. We also strongly believe this is an intrusion in the domestic affairs of Hungary and goes well beyond what the European institutions are entitled to have their say”, the government spokesperson said.

Asked by EURACTIV about Hungary’s position regarding the Schengen accession of Bulgaria and Romania, he said that the issue now was clearly about preserving Schengen, and not expanding it.

Before the migration crisis, Hungary was an ardent supporter of Bulgaria and Romania’s Schengen accession. The two countries have been ready to join the EU borderless space for several years but have been blocked by a veto from countries such as France, Germany and the Netherlands.

Kovács said that the many prolongations of internal border controls are “just an attempt to handle the situation by insufficient means”. “Schengen can be protected only by the outside, not within”, he said.

Asked by EURACTIV if Greece, a Schengen member, represented a problem, he said:

He added that this was not a Hungarian, Bulgarian or Romanian problem but a European issue.

Asked if he agreed with the upcoming Bulgarian presidency’s renewed commitment to the Western Balkans, he said Hungary “very highly” agreed. He mentioned the contribution of the countries of the Western Balkans to stopping the refugee flows.

This contribution took place outside the EU framework, led by Austria and Hungary.

An earlier version of this article was published with the website BulgarianPresidency.eu.