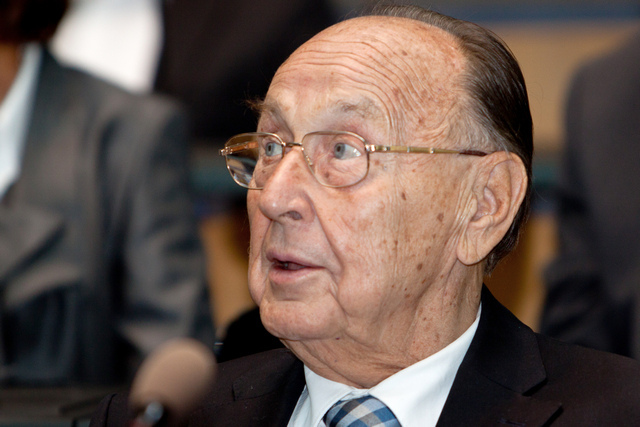 His marathon 1974-92 tenure as Germany’s chief diplomat broke longevity records in Europe and spanned some of the continent’s most dramatic moments, including the 1989 fall of the Berlin Wall.

Genscher was praised by EU Commission President Jean-Claude Juncker as a “symbol of hope” in divided Germany, adding “it is in part a tribute to his work that today we are a European Union of 28” member states.

Having fled communist East Germany as a young man, the trained lawyer and liberal politician became a leading advocate for East-West dialogue, and a champion of European unity.

Tributes quickly poured in after news that he had died late Thursday of heart failure surrounded by his family.

Chancellor Angela Merkel, who grew up behind the Iron Curtain, praised the “globally respected statesman” and recalled how political milestones achieved in part by Genscher “gave me and millions of others in East Germany and eastern Europe hope for change”.

When Genscher took office, Europe looked to be forever divided into two nuclear-armed camps, NATO and the Warsaw Pact.

When he stepped down, Germany was reunited and Soviet communism had been consigned to history.

Genscher, who served in both centre-left and conservative governments, had long rejected demonising the Soviet Union and argued early that Mikhail Gorbachev’s reforms presented a historic opportunity for detente.

Gorbachev on Friday praised Genscher as “one of first Western politicians who called for taking seriously” his reforms, saying that “when the Cold War ended and the reunification of Germany happened, his critics had to admit that he was right.”

Genscher negotiated Germany’s 1990 reunification and the withdrawal of Soviet forces with his sceptical US and Russian counterparts, James Baker and Eduard Shevardnadze.

That agreement, said Merkel, “is his lasting achievement and the culmination of his political career”.

A watershed moment for Genscher was a September 1989 speech at the West German embassy in Prague, where the courtyard was packed with thousands of East Germans desperate to head west.

Genscher spoke from the balcony to announce a deal with the Czech communist government allowing them safe passage.

“We have come to you to tell you that today your departure…” he said — but the rest of the sentence was lost to history as it was drowned out by jubilant cheers.

Genscher had not always received such praise. He often exasperated US and British diplomats who believed his mediator role weakened NATO and its nuclear deterrence.

And there was also reproach for his policy on Yugoslavia, which some saw as contributing to the break-up of the old six-republic federation by encouraging Croatia’s nationalist aspirations.

But to millions of West Germans, Genscher was a counter-weight to hardline conservatism and a brake on the nuclear arms race whose sponsorship of east-west contacts kept the faith of East Germans alive.

His hangdog expression and jug ears, a cartoonist’s delight, were emblazoned on masks and T-shirts and even featured in a comic strip, where a caped crusader known as “Genschman” leapt into action to upset the machinations of the right.

He was long Germany’s most popular politician.

In retirement, he kept working his Moscow contacts, brokering in late 2013 the early release from jail of Kremlin critic Mikhail Khodorkovsky, after secret talks with Russian President Vladimir Putin.

Khodorkovsky was among the many who paid tribute to Genscher on Friday, writing on Twitter that “as I know now, he saved my life”.

Genscher was born in 1927 to a farming family near Halle in what later became communist East Germany.

Despite his frail health, he was drafted into the German military as a teenager in World War II and briefly taken prisoner by Allied forces.

He went on to study law and economics, before fleeing East Germany in 1952 to the west, where he worked as a lawyer and joined the small, liberal Free Democrats (FDP).

He entered parliament in 1965 and by 1974 had won the FDP chairmanship and became foreign minister, a post he held onto under conservative chancellor Helmut Kohl, who was later known as the “father of reunification”.

FPD chief Christian Lindner honoured Genscher, saying that he “made history and shaped our country. We have much to thank him for. Our sorrow could not be greater.”