The President of Kazakhstan Nursultan Nazarbayev has re-shuffled the cabinet, appointed a new foreign minister and given the ministry new powers and responsibilities for attracting foreign investment.

On 26 December, Nazarbayev reorganised three ministries and appointed new ministers through a string of presidential decrees.

The President significantly strengthened the economic diplomacy credentials of the Ministry of Foreign Affairs by giving it oversight over the work on attracting foreign investment and promoting Kazakh exports abroad, taking away these responsibilities from the reformed Ministry for Investment and Development.

He appointed Beibut Atamkulov as Minister of Foreign Affairs and relieved former Foreign Minister Kairat Abdrakhmanov of his responsibilities due to his transfer to another job, as yet unannounced.

Atamkulov, an engineer by training, has worked in the private sector and in government institutions, having served as a career diplomat from 2006.

EURACTIV spoke to deputy foreign minister Roman Vassilenko, who said the re-shuffle of the foreign ministry was aimed at working in a much more focused way on attracting foreign investment and promoting Kazakh exports abroad.

He also said that with his long, diverse and successful career in private business, government institutions and in the diplomatic service, Atamkulov would infuse “new energy and new vision” in the country’s international efforts.

“Europeans may also be interested to learn that [Atamkulov] has previously served as our Consul General in Frankfurt where he was primarily focused on working with German and European companies interested in cooperating with Kazakhstan,” Vassilenko said.

Asked what was the reason for putting more emphasis on FDI, Vassilenko explained that globally, foreign investment were decreasing (by 23% for 2017, according to UNCTAD), and that the response would be to focus on quality investment that comes with advanced technologies.

He recalled that Kazakhstan had attracted $300 billion dollars in FDI during its 27 years as an independent state, but stated that the lion’s share of these went into the extractive industries, primarily oil and gas.

“So, as we seek to further modernise our economy in order to reach our goal of joining the top 30 most developed countries by 2050, we naturally need to strengthen our efforts to attract a diversified range of foreign investments and technologies as part of mutually beneficial partnerships,” Vassilenko said.

The diplomat explained that agribusiness, the production of machinery, equipment and motor vehicles, as well as the chemical, pharmaceutical, metallurgy and construction industries have been identified as among the highest priority areas for attracting investors, and those were the sectors Kazakhstan provided significant benefits for investors.

Fiscal preferences, he said, were offered for 10 years on corporate and land tax, as well as for 8 years on property tax. Moreover, companies could also benefit from an investment subsidies payment, which takes the form of a monetary reimbursement of up to 30% of the construction, installation and equipment costs.

There is also a possibility of receiving state in-kind (natural) grants in the form of public property including temporary free land use, Vassilenko explained.

The European Union is by far, Kazakhstan’s largest trading and investment partner, accounting for almost half of our foreign trade and investment, Vassilenko stressed.

“We intend to continue strengthening the foundations for this economic success story, including through the full entry into force of the Enhanced Partnership and Cooperation Agreement (EPCA) between Kazakhstan and the EU and its member states,” he added. 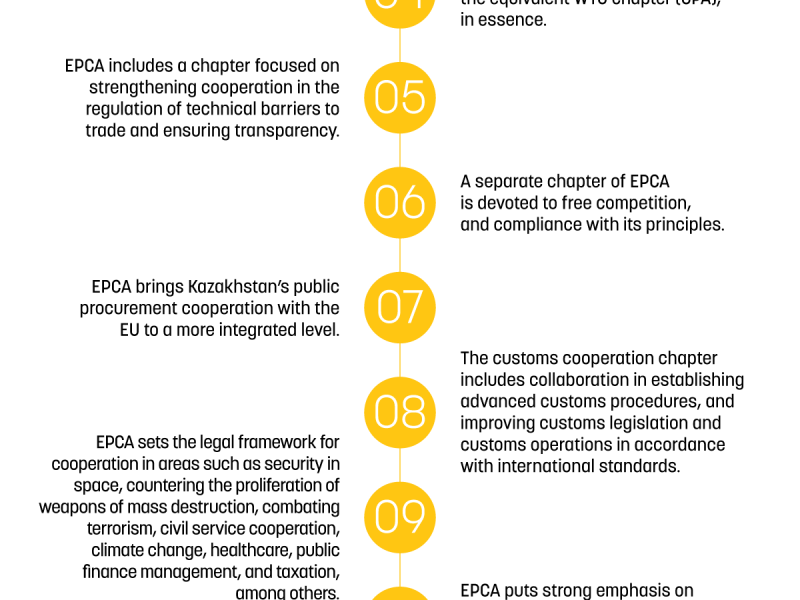 The diplomat mentioned industrial cooperation with French companies such as Alstom in assembling electric locomotives in Kazakhstan, and the production of switch electric drives for railways, totalling $1.2 billion of investment in 20 years. Another French company, Auber & Duval, has reportedly invested in the production of titanium parts for European Airbus planes under a joint venture, with investment totalling $70 million.

Other examples mentioned were the production of passenger railway cars with Spanish company Talgo. German companies such as Knauf, Heidelberg Cement, and Bayer are implementing projects focused on the production of construction materials and pharmaceutical products. In agribusiness, multinational dairy producers Danone and Lactalis transform sour milk products in Kazakhstan, Vassilenko said.

“More and more European investors continue to recognise the opportunities for maximising revenue in Kazakhstan, as well as the opportunities to establish a foothold in Central Asia and gain access to the Eurasian Economic Union – a marketplace of over 180 million consumers,” Vassilenko said.

Kazakhstan, together with Belarus, Kyrgyzstan and Armenia, is a member of the Russia-led Eurasia Economic Union, a political and economic union of states in Europe and Asia, loosely modelled on the EU.

Vassilenko said that another important factor to consider in terms of potential for foreign investment was Kazakhstan’s proximity to China and the country’s participation in the development of the Silk Road of the 21st century, including through its own Nurly Zhol infrastructure development program and through cooperation within the Belt and Road Initiative.

Nurly Zhol is a $9 billion domestic economic stimulus plan to develop and modernise roads, railways, ports, IT infrastructure, education and civil services in the Republic of Kazakhstan.