Former President of Czech Republic Vaclav Havel (L) participates in a protest in front of the Chinese embassy against the crackdown of protests in Tibet, Prague, Czech Republic, 19 March 2008 [EPA/FILIP SINGER ]

For many in the Czech Republic, Hřib has become a symbol of resistance against Chinese influence, pitting himself against Prime Minister Andrej Babiš and President Miloš Zeman, who are known for promoting Chinese investments.

“I consider myself a liberal politician. We (the Pirate Party) do not put ourselves on the left-right scale, we are sort of in the middle,” Hřib described himself.  The Pirate Party is also popular in other European countries, like Germany, Sweden or Luxembourg.

But what has the mayor actually done to prompt newspapers like The Guardian, the Washington Post and Neue Zürcher Zeitung to publish articles about him? 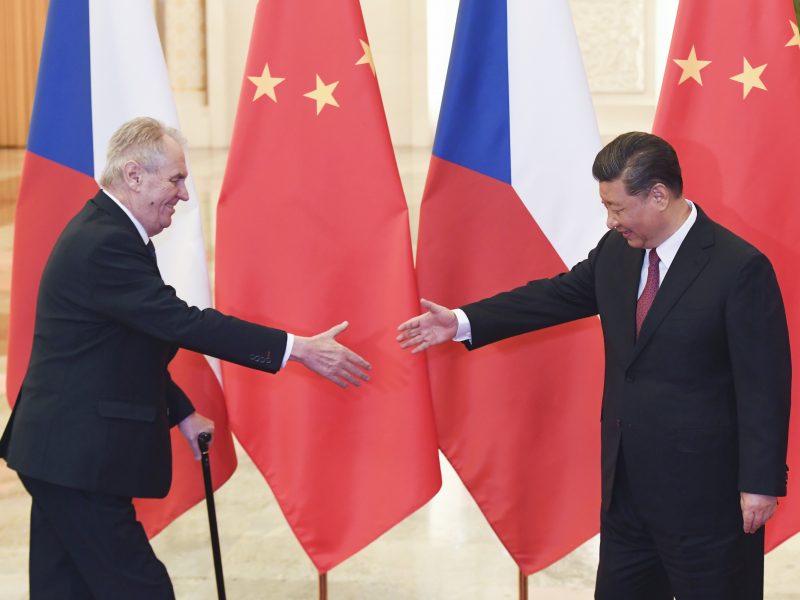 China's political interference in Czech Republic back in focus

Political interference by China is now essentially a global phenomenon. In the Czech Republic, relations with Bejing are institutionalised in the 17 plus 1 framework. Their real impact is difficult to assess but they have already pitted the country’s president against many other politicians and the public.

At the start of his mandate, he refused to expel the ambassador of Taiwan at the request of his Chinese colleague. Following this, he hung the Tibetan flag on the City Hall building and invited Lobsang Sangay, the prime minister of the Tibetan government in exile, for a meeting.

Mr Hřib, a doctor who did a medical training internship in Taiwan, openly demanded that China remove a clause from a Prague-Beijing cooperation that requires Prague to "respect the one-China policy and acknowledge Taiwan as an inseparable part of Chinese territory".👍Respect!

However, Hřib gained fame by fighting to exclude Article III from the agreement to twin the cities of Prague and Beijing, even though it might result in losing benefits from cooperation with Beijing. Article III confirms the Czech Republic’s commitment to the One China Policy.

“That is something we do not want to deal with. We want to keep our partnerships with foreign cities apolitical and based on a mutually beneficial cultural exchange. If it is impossible to exclude Article III, then cancelling the contract is one of the realistic scenarios,” he said of the agreement.

The mayor’s priority is to plant one million new trees in Prague and 170,000 of them have been already planted. Hřib also supports the construction of a new metro line, infrastructure development in general and ecology.

Some people see him as seeking to reassert the values of Václav Havel, the first president of the Czech Republic, who supported Tibet and became a symbol of the fight against Communism.

“I do not consider myself as a bearer of Havel’s legacy. Pirates are making their way to liberal central politics. I personally focus only on Prague,” Hřib told EURACTIV and explained that his intention was not to fight with China but his main interests were those of Prague.

“The Prague City Council deals with matters related to Prague and its municipal government. For example, negotiations on modifying the partnership agreement with Beijing, or renewing the tradition of hanging the Tibetan flag at the town hall, as over 700 other town halls in the Czech Republic,” he added.

A trip to China of a leading Czech string ensemble,  the Pražák Quartet, was cancelled by Chinese authorities on Tuesday. A similar situation has already happened earlier this year with the planned tour of the Prague Philharmonic.

Hřib also told EURACTIV that the Prague City Council was not going to officially react to the current situation in Hong Kong, rocked by growing protests, but the mayor condemned the unnecessary police brutality there.

Senator Pavel Fischer and the president of the Czech-Moravian Confederation of trade unions, Josef Středula, last week appealed to the Chinese ambassador to the Czech Republic to respect human rights and refrain from violence against protesters in Hong Kong.

The Chinese embassy responded that it had noticed that “politicians and some institutions had recently expressed erroneous opinions and even issued open letters about the issue of Hong Kong. These actions interfere with China’s internal affairs.”

We understand demands of HK protesters. Thus, for the time being, the Chinese official reaction to my open letter was rather bleak.