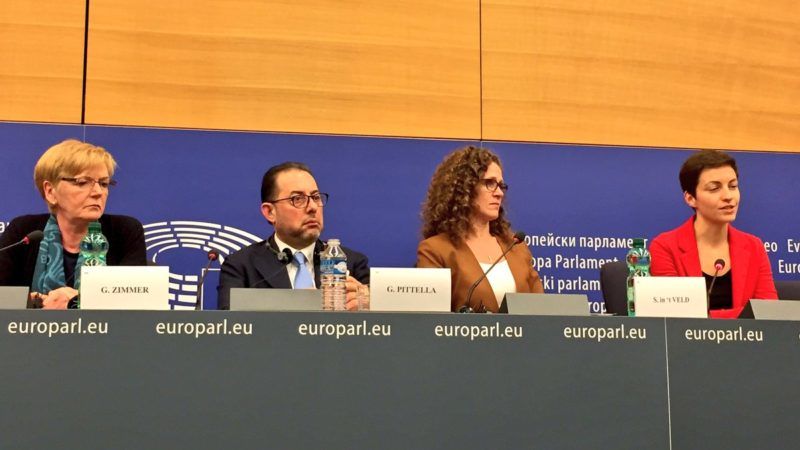 MEPs raised their voices in defence of the CEU. [S&D Group/Twitter]

Hungary’s parliament approved a law on Tuesday (4 April) that could force out a university founded by financier George Soros – the Central European University (CEU) – despite international condemnation and protests by thousands of Hungarians.

Also on Wednesday, Orbán’s Fidesz party said it would present a bill to parliament this week that requires NGOs with a yearly foreign income of 7.2 million forints ($25,000) to register with the government.

“Support from unknown foreign sources could allow foreign interest groups to pursue their own interests via the influence of these (NGOs) in Hungary … which threatens the country’s political and economic interests,” the bill says.

NGOs, many of whom receive grants from Soros’ Open Society Foundation, often advocate on behalf of refugees, clash with Orbán and other Eastern European leaders who contend that migration is an existential threat.

“Like Fidesz crossed a red line yesterday with the CEU bill so they did again with the NGO’s,” Akos Hadhazy, a lawmaker from the opposition green-liberal LMP party, told Reuters. “Sadly the red lines are so many they look like a red carpet by now.”

“This is a dirty little law,” Hadhazy added. “All it does is mark the government’s least favourite NGOs with a yellow star,” he said, referring to Jews being required to wear stars on their clothes under the Nazi regime.

The Hungarian Civil Liberties Union said the law was “unnecessary” from a legislative perspective.

However, Fidesz has a parliamentary majority and can pass laws on its own.

In Strasbourg, European lawmakers (MEPs) from all leftist groups, liberals and some from the conservative European People’s Party (EPP), the largest grouping in the parliament, said they wanted action taken against Hungary.

MEPS from multiple groups in the EP raising their voices in opposition to Orbán's actions against the Central European University #Hungary pic.twitter.com/L9MKHUOlhZ

Freedom of thinking, research and speech are essential for our European identity. @EPPGroup will defend this at any cost. #CEU

A disciplinary procedure can mean suspension of an EU state’s voting rights, but such an action has never been taken.

The start of a procedure would also require two-thirds of the chamber to support the start of such a procedure, a threshold that would not be reached if enough of the EPP does not back the measure.

Orbán’s Fidesz party is a member of the EPP, which has so far opposed taking action against Hungary. An official from the group said that it was too early to consider such a move.

The European Commission or the European Council could also start a disciplinary procedure but have been reluctant to do so as it could fuel anti-EU feelings at a time when the EU is grappling with Britain’s departure and rising Euroscepticism.

On Wednesday, the Commission said it was studying the new Hungarian law on university funding and that it would discuss it in a meeting of Commissioners next week.

The Polish government has been rebuked on several occasions by Brussels for reforms of the judiciary, but the Commission has so far fallen short of starting a disciplinary procedure and resorted instead to monitoring Polish reforms.

The conservative MEPs who support starting the procedure against Hungary are from Poland’s Civic Platform party, the same as EU summits chair Donald Tusk, and strongly oppose the Law and Justice (PiS) party which is in power in Poland.

Sciences Po in France condemned the limiting of freedoms essential for academic work, in Hungary and throughout Europe. This legislation clearly aims to impair and disenfranchise CEU, and the University stands by its academic colleagues as the CEU asserts its rights as a vital independent centre of knowledge and research in Central Europe.

Many other reactions of solidarity with CEU can be found at the University’s website.

I would like to endorse Carlos Moedas' strong declaration #ceu #hungary https://t.co/WJKfJC8jCG

Soros’s lies are also misleading the German government - says the Hungarian government spokesperson, who graduated at the Soros-founded #Ceu